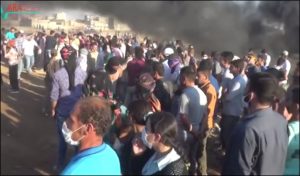 KOBANE, Syria – At least two civilians were killed and 97 more were injured on September 3 after Turkey started to shoot gas grenades and bullets against Syrian Kurdish protestors near Kobane who were resisting Turkish attempts to build a barrier wall on the Syria-Turkey border.

On Sunday, the people of Kobane buried those killed by Turkish fire, amid condemnation of Turkey’s intervention in Syria and its attempt to build a barrier wall on the borderline.

Bazan Ehmed (17) and Ehmed Hesen (16), two victims of the Turkish security forces, were buried in Kobane where hundreds of people gathered to show support to their families. In the meantime, protests continued on Sunday, but no civilians were injured.


Turkey says the aim of the wall is to secure the Turkish border after terrorist attacks hit Turkey, but Kurds reject this as an excuse to create obstacles for the Kurds to create an autonomous region in Syria.

“The protestors say the building of the wall is illegal, as Turkey is occupying our land and building it inside Kobane territories,” Idris Nassan, a former senior Kurdish official in the Kobane administration, told ARA News. “We resisted ISIS and lost thousands of our youth, and our houses were destroyed, but we didn’t give up.”

“Turkey doesn’t have any right to control Kobane, which is the capital of resistance. They are trying to put an embargo on Kobane, and cut life items for the people,” Nassan said.

“Turkey aims to create obstacles for the declaration of the northern Syria federal system. On the one hand, Turkey invades Jarablus and the Shahba [Aleppo] region, and on the other hand invades Kobane lands,” he said.

Speaking to ARA News [see news video], Amkihan Muhammad, a member of the Kurdish Red Crescent in Kobane, said that dozens of people have been injured since the anti-Turkey protests started in Kobane last week. Due to the attacks by the Turkish army forces, there have been dozens of civilian casualties, most of them suffering suffocation due to the teargas fired by Turkey,” she said.

“So far two people lost their lives, while several others suffered from serious injuries and are now in critical condition.”

The protesters, who have been organising sit-ins for nearly one week, condemning the Turkish project of building a barrier wall on the border between Rojava and Turkey’s Kurdish region.

Sherman Muslim, Deputy Chief of Social Affairs in Rojava Administration, told ARA News: “The Turkish authorities tried to separate the protesters by repeatedly firing teargas. The Turkish forces have entered the Kobane territory in order to build their barrier wall. However, our people are resisting this racist project by all possible means.”

“The protesters have forced the Turkish troops to withdraw towards their positions behind the borderline at the moment. The young protesters proved their revolutionary spirit by continuing to organise sit-ins on the border,” he said.


In Cologne, Germany, thousands of Kurds protest against Erdoğan

About 25,000 Kurdish supporters demonstrated peacefully in Cologne on Saturday against Turkish President Tayyip Erdogan, chanting in German, “neither military coup nor civilian dictatorship.”

Many demonstrators carried posters portraying Abdullah Ocalan, the jailed leader of the militant Kurdistan Workers Party (PKK), which is listed as a terrorist group by the European Union and the United States, and is banned in Germany…