From the start of his presidency, Donald Trump’s “war on terror” has entailed the seemingly indiscriminate slaughter of innocent people in the name of killing terrorists. In other words, Trump has escalated the 16-year-old core premise of America’s foreign policy — that it has the right to bomb any country in the world where people it regards as terrorists are found — and in doing so, has fulfilled the warped campaign pledges he repeatedly expressed. 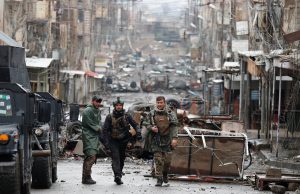 Iraqi special forces in a street in Mosul on March 4, 2017 (Goran Tomasevic, Reuters)

The most recent atrocity was the killing of as many as 200 Iraqi civilians from U.S. airstrikes this week in Mosul. That was preceded a few days earlier by the killing of dozens of Syrian civilians in Raqqa province when the U.S. targeted a school where people had taken refuge, which itself was preceded a week earlier by the U.S. destruction of a mosque near Aleppo that also killed dozens. And one of Trump’s first military actions was what can only be described as a massacre carried out by Navy SEALs, in which 30 Yemenis were killed; among the children killed was an 8-year-old American girl (whose 16-year-old American brother was killed by a drone under Obama).

In sum: Although precise numbers are difficult to obtain, there seems little question that the number of civilians being killed by the U.S. in Iraq and Syria — already quite high under Obama — has increased precipitously during the first two months of the Trump administration. Data compiled by the site Airwars tells the story: The number of civilians killed in Syria and Iraq began increasing in October under Obama but has now skyrocketed in March under Trump…