Trump’s Green Light to Israel: First the Golan, Then the West Bank? 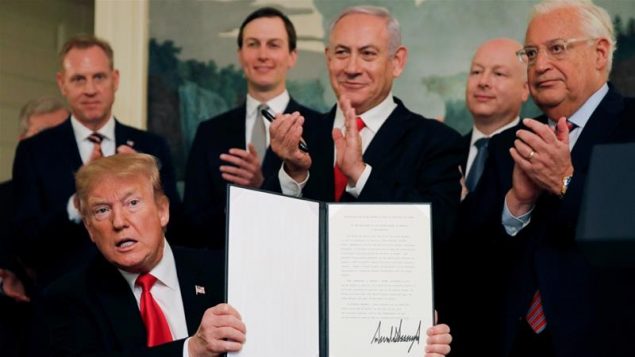 US President Donald Trump holds a proclamation recognising Israel’s sovereignty over the Golan Heights as he is applauded by Israel’s PM Benjamin Netanyahu on March 25, 2019 [Reuters/Carlos Barria]

Lat week Trump wrote on Twitter: “After 52 years it is time for the United States to fully recognize Israel’s Sovereignty over the Golan Heights, which is of critical strategic and security importance to the State of Israel and Regional Stability.”

When President Donald Trump moved the US embassy to occupied Jerusalem last year, effectively sabotaging any hope of establishing a viable Palestinian state, he tore up the international rulebook.

Last week, he trampled all over its remaining tattered pages. He did so, of course, via Twitter.

Referring to a large piece of territory Israel seized from Syria in 1967, Trump wrote: “After 52 years it is time for the United States to fully recognize Israel’s Sovereignty over the Golan Heights, which is of critical strategic and security importance to the State of Israel and Regional Stability.”

Israel expelled 130,000 Syrians from the Golan Heights in 1967, under cover of the Six Day War, and then annexed the territory 14 years later – in violation of international law. A small population of Syrian Druze are the only survivors of that ethnic cleansing operation.

Replicating its illegal acts in the occupied Palestinian territories, Israel immediately moved Jewish settlers and businesses into the Golan.

Until now, no country had recognised Israel’s act of plunder. In 1981, UN member states, including the US, declared Israeli efforts to change the Golan’s status “null and void”.

But in recent months, Israeli prime minister Benjamin Netanyahu began stepping up efforts to smash that long-standing consensus and win over the world’s only superpower to his side.

He was spurred into action when the Bashar Al Assad – aided by Russia – began to decisively reverse the territorial losses the Syrian government had suffered during the nation’s eight-year war.

The fighting dragged in a host of other actors. Israel itself used the Golan as a base from which to launch covert operations to help Assad’s opponents in southern Syria, including Islamic State fighters. Iran and the Lebanese militia Hezbollah, meanwhile, tried to limit Israel’s room for manoeuvre on the Syrian leader’s behalf.

Iran’s presence close by was how Netanyahu publicly justified the need for Israel to take permanent possession of the Golan, calling it a vital buffer against Iranian efforts to “use Syria as a platform to destroy Israel”.

Before that, when Assad was losing ground to his enemies, the Israeli leader made a different case. Then, he argued that Syria was breaking apart and its president would never be in a position to reclaim the Golan.

Netanyahu’s current rationalisation is no more persuasive than the earlier one. Russia and the United Nations are already well advanced on re-establishing a demilitarised zone on the Syrian side of the separation-of-forces line. That would ensure Iran could not deploy close to the Golan Heights.

At a meeting between Netanyahu and Trump in Washington on Monday night, the president converted his tweet into an executive decree.

The timing is significant. This is another crude attempt by Trump to meddle in Israel’s election, due on April 9. It will provide Netanyahu with a massive fillip as he struggles against corruption indictments and a credible threat from a rival party, Blue and White, headed by former army generals.

Netanyahu could barely contain his glee after Trump’s tweet, reportedly calling to tell him: “You made history!”

But, in truth, this was no caprice. Israel and Washington have been heading in this direction for a while.

In Israel, there is cross-party support for keeping the Golan.

Michael Oren, a former Israeli ambassador to the US and a confidant of Netanyahu’s, formally launched a plan last year to quadruple the size of the Golan’s settler population, to 100,000, within a decade.

The US State Department offered its apparent seal of approval last month when it included the Golan Heights for the first time in the “Israel” section of its annual human rights report.

This month, Republican senator Lindsey Graham made a very public tour of the Golan in an Israeli military helicopter, alongside Netanyahu and David Friedman, Trump’s ambassador to Israel. Graham said he and fellow senator Ted Cruz would lobby the US president to change the territory’s status.

Trump, meanwhile, has made no secret of his disdain for international law. This month, his officials barred entry to the US to staff from the International Criminal Court, based in The Hague, who are investigating US war crimes in Afghanistan.

The ICC has made enemies of both Washington and Israel in its initial, and meagre, attempts to hold the two to account.

Whatever Netanyahu’s spin about the need to avert an Iranian threat, Israel has other, more concrete reasons for holding on to the Golan.

The territory is rich in water sources and provides Israel with decisive control over the Sea of Galilee, a large freshwater lake that is crucially important in a region facing ever greater water shortages.

The 1,200 square kilometres of stolen land is being aggressively exploited, from burgeoning vineyards and apple orchards to a tourism industry that, in winter, includes the snow-covered slopes of Mount Hermon.

As noted by Who Profits, an Israeli human rights organisation, in a report this month, Israeli and US companies are also setting up commercial wind farms to sell electricity.

And Israel has been quietly co-operating with US energy giant Genie to explore potentially large oil reserves under the Golan. Trump’s adviser and son-in-law, Jared Kushner, has family investments in Genie. But extracting the oil will be difficult, unless Israel can plausibly argue that it has sovereignty over the territory.

For decades the US had regularly arm-twisted Israel to enter a mix of public and back-channel peace talks with Syria. Just three years ago, Barack Obama supported a UN Security Council rebuke to Netanyahu for stating that Israel would never relinquish the Golan.

Now Trump has given a green light for Israel to hold on to it permanently.

But, whatever he says, the decision will not bring security for Israel, or regional stability. In fact, it makes a nonsense of Trump’s “deal of the century” – a long-delayed regional peace plan to end the Israeli-Palestinian conflict that, according to rumour, may be unveiled soon after the Israeli election.

Instead, US recognition will prove a boon for the Israeli right, which has been clamouring to annex vast areas of the West Bank and thereby drive a final nail into the coffin of the two-state solution.

Israel’s right can now plausibly argue: “If Trump has consented to our illegal seizure of the Golan, why not also our theft of the West Bank?”

Jonathan Cook won the Martha Gellhorn Special Prize for Journalism. His latest books are “Israel and the Clash of Civilisations: Iraq, Iran and the Plan to Remake the Middle East” (Pluto Press) and “Disappearing Palestine: Israel’s Experiments in Human Despair” (Zed Books). His website is http://www.jonathan-cook.net/