Criticizing his predecessors for misguided foreign wars, President Trump promised a break in that approach, but his National Security Strategy report issued on December 18 indicates a shift more in rhetoric than substance. 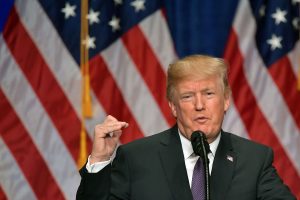 President Trump’s recent report on National Security Strategy supposedly reflected his ‘America First ‘“realism”, but his approach seems more like old wine in a new bottle, particularly his continued strong support for Saudi Arabia and Israel in the Middle East combined with an even more aggressive U.S. policy in Asia aimed at containing China as well as confronting North Korea.

For more background on Trump’s foreign policy, I speak to Matthew Hoh. In 2009, Hoh resigned his position with the State Department in Afghanistan in protest of the escalation of the Afghan War by the Obama administration. He previously had been in Iraq with a State Department team and with the U.S. Marines. He is a senior fellow with the Center of International Policy. Hoh is also a member of the advisory boards of Expose Facts, Veterans For Peace and World Beyond War.

Dennis Bernstein: Before we get into Trump’s recent major speech on foreign policy, let’s take a look at Afghanistan, where you were posted by the State Department until you resigned in protest. Your thoughts after over 16 years of a U.S.-waged war there?

Matthew Hoh: For the people of Afghanistan, this war has been going on since the 1970’s, much of it propelled by and supported by outside involvement. It has been eight years now since I resigned. If you had told me back then that this level of tragedy would still be continuing eight years on, there is no way I would have believed you.

It was just revealed by the Pentagon that in the last six months, American and Afghan commandos have conducted more than 2,000 raids in Afghanistan. Americans are still there kicking in doors, raiding people’s homes in the middle of the night, killing them, taking prisoners. This has happened over 2,000 times in Afghanistan in the last six months! In addition to that, we have seen an escalation in air strikes, both from drones and from manned aircraft, in Afghanistan and throughout the Muslim world.

These poor suffering people are no closer to seeing an end to this horrific violence. Money continues to pour in to support the war, people continue to get rich off the war, the opium trade continues to expand.

Bernstein: It’s interesting, there are two major things that Trump has done when it comes to Afghanistan. One was to test out “the mother of all bombs” there and the other was to state that we are not going to make any commitment to withdraw by a certain date.

Hoh: Dropping the mother of all bombs was really the first indication of what war policy was going to look like under Trump. Under Obama and under Bush, there was a political victory sought. As immoral and misguided as the military aims were, there was a political end stated. They encouraged elections, they assisted in development, they were involved in a process of reconciliation.

Under the Trump administration, there is no political end state. People who were concerned about there being so many generals in the White House were concerned for a reason. We have General Kelly as Chief of Staff, Mattis as Secretary of Defense and General McMaster as National Security Advisor. You have military operations now conducted simply for military purposes. This new bomb is a great example of that.

They lied that it was used to go after a tunnel complex. It was above ground and turns the entire area into one huge flash. It is useless against tunnels. The dropping of this bomb was meant to punish the people there because one a week prior, an American service member had been killed in that area.

This policy of terror and punishment is in common with other wars which America is leading in the region. In Iraq, the U.S.-led forces have demolished Sunni cities in the Euphrates and Tigris River Valleys. Look at what the Saudis and the United Arab Emirates have been doing in Yemen, what the Kurdish forces along with the American Air Force have done to Raqqa as well as other cities in eastern Syria. And in Afghanistan we are seeing an increase in air strikes, in artillery operations and in these night raids into people’s homes.

Our policy has become to terrorize people into subjugation. And this ties into what Trump said on the campaign trail. Trump said a number of times that he was going to “take the gloves off,” that our wars were too politically correct, that we should be killing the families of terrorists and destroying their homes, etc.

Bernstein: President Trump gave his big speech yesterday [Monday, Dec. 18] on U.S. foreign policy. What is your take on what was said?

Hoh: As has been pointed out by a number of commentators, Trump’s speech yesterday was really a public relations speech, affirming his status as the leader of the ‘Make America Great Again’ campaign. The first thing he talked about, as he was addressing the national security interests of the United States, was how 13 months prior, the American people elected him to be a “glorious new hope”. The target of the speech was not China or Russia or the Islamic State. Its purpose was to reaffirm to his domestic political base that he is the man to lead a policy of American exceptionalism. This is the belief that American moral superiority is needed to keep the world in order.

If you wanted details, you weren’t going to get them in this speech. I always tell people, if you want the details, go to the budget. Just as in previous administrations, there is a preoccupation with China. We are building ten new aircraft carriers that will cost $13 billion apiece. That is meant for an adversary like China. The Air Force refuses to even reveal the price tag of its new nuclear bomber. Our nuclear weapons program will get a trillion-dollar shot in the arm to modernize over the next 30 years. These types of weapons are meant to intimidate our “competitors”, as Trump likes to call them, who might rival our power.

Bernstein: The Obama administration had a very aggressive policy in the so-called Pacific Pivot, drawing a ring around China to undermine it while at the same time asking for China’s support in dealing with North Korea. Is it more dangerous now because Trump is a little more volatile and dangerous and might want to create a distraction from his troubles at home?

Hoh: For those of us on the left, we should not lose sight of what took place during Obama’s eight years which allowed this to happen. The previous administration did nothing to hold the torturers accountable. This makes it easier for a Donald Trump to proclaim that torture is back.

In the case of the Pacific Pivot, we are ringing China with military bases, strike aircraft and naval ships that would demolish anything that China has, despite the fact that they have expanded their military forces over the last couple decades. A modern conventional war with China would last a week at the outside. Obama did a lot to heighten those tensions.

For centuries, the Chinese have had to deal with colonization and the imperialist ambitions of various powers. A hundred years ago, the American Navy was present on Chinese rivers! What we are seeing now is really an extension of gunboat diplomacy. So, when today the Chinese hear of American plans to build new aircraft carriers and bombers and nuclear cruise missiles, and know that this is geared toward them, it is not difficult to predict how they are going to react.

I think Trump truly believes that through our weapon superiority and our violence, we can be a great nation again. And also, as you mentioned, there’s the ‘wag the dog’ phenomenon. What if his son does get indicted (which is probably what he deserves)? Will he do something to distract from that? [Then-President Bill ] Clinton did something similar to distract attention from the Monica Lewinsky affair. It is not uncommon for politicians to get the media and the public to focus elsewhere.

But the fact that Trump has these generals on his cabinet who are driven by their military mindset and tend not to have the political concerns of civilians makes this administration more dangerous than the previous two.

Bernstein: I’d like to hear your thoughts on ‘Russiagate’.

Hoh: First of all, if the Russian intelligence services were not trying to hack into the DNC and RNC computers in order to understand our election system, as well as everything else about us, then the head of Russian intelligence should be fired. This is what intelligence services do. We’ve known about hacking for decades now. It wouldn’t surprise me to learn that they did hack into these systems. However, evidence of this has not been presented to the American public, other than assertions from the intelligence community, whose chief function is to lie.

Normally, what is called a “national intelligence estimate” is done, which follows specific guidelines and is reviewed by all the different agencies. This is what was doctored under the Bush administration to allow for the war in Iraq. But we also saw it with the 2007 national intelligence estimate, which said that the Iranians had not been doing anything with their nuclear weapons program since 2003.

So, within the intelligence community, they do have a process that would substantiate these claims of Russian interference in our elections. But that process has not been utilized. This hand-picked group of a dozen or so men and women from a few different agencies produced a report [in February 2017] which said, in effect, “trust us”. I am very skeptical, because no real evidence has yet to be produced.

Dennis J Bernstein is a host of ‘Flashpoints’, the weekday program on the Pacifica radio network, and the author of ‘Special Ed: Voices from a Hidden Classroom‘. You can access the Flashpoints audio archives at www.flashpoints.net.

Related:
Refusing to learn bloody lessons from the U.S. war in Afghanistan, interview with former U.S. Marine Matthew Hoh, published in the American Herald Tribune, Nov 26, 2017.  (Original headline: ‘Militarism is one of the true religions of the United States’.) The interview also appears in Consortium News. Additional, related readings on Afghanistan are included in the posting to New Cold War.org.

The journalism at Consortium News is made possible through donations from readers. Contributions go directly to support the production, editing, and dissemination of original journalism. Consortium News does not receive corporate/government sponsorships and does not sell advertisements. It holds three fund drives each year.

When you donate to Consortium News, you are investing in ethical journalism. Contributions from readers provide compensation to contributing writers for original works of journalism and to fact-checking and editorial work. Consortium News‘ articles are frequently circulated to other independent news websites, bolstering the availability of strong, journalistically-sound content across the internet.

Consortium News is a 501(c)(3) nonprofit and donations by U.S. taxpayers are fully tax-deductible to the extent of the law. To donate, click here.