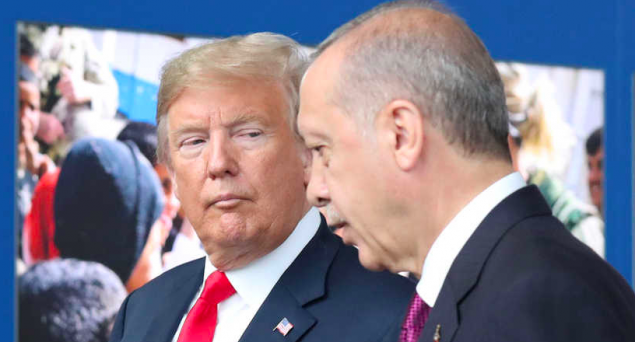 The double blow the US House has dealt Turkey over its military campaign in Syria shows how wrong Erdoğan is to rely on his personal relationship with Trump to manage ties with the United States.

After Turkish President Recep Tayyip Erdogan agreed to suspend Operation Peace Spring against Kurdish forces in Syria in talks with US officials Oct. 17, US President Donald Trump was quick to express his admiration for the Turkish leader. “I just want to thank and congratulate President Erdogan. He’s a friend of mine, and I’m glad we didn’t have a problem because, frankly, he’s a hell of a leader, and he’s a tough man,” Trump said after his emissaries, Vice President Mike Pence and Secretary of State Mike Pompeo, went to Ankara and talked Erdogan into a temporary cease-fire a week after he had launched the campaign.

Trump also called Erdogan a “strong man,” but that was certainly not in the sense of “autocrat” (strongman) — it was more praise. “He’s a strong man, and he did the right thing and I really appreciate it, and I will appreciate it in the future,” Trump said, adding that Erdogan would travel to Washington on Nov. 13 on Trump’s invitation.

A week later, following the Oct. 22 deal Erdogan reached with Russian President Vladimir Putin on a safe zone to be clear of the Kurdish People’s Protection Units (YPG), Trump removed the sanctions he had slapped on Turkey over the operation. The sanctions were already of token significance, designed to appease criticism that Trump had given a green light to Turkey’s military campaign and abandoned the YPG, the chief US ally in the fight against the Islamic State (IS) in Syria.

That Trump has a soft spot for “strongmen” of the likes of Putin and North Korea’s Kim Jong Un is something that the whole world has realized by now, given the ties he has fostered with such leaders in his three years in the White House. Yet Trump’s affinity for Erdogan — reflected also in the “candid” tone of his Oct. 9 letter to the Turkish leader — is hardly descriptive of the entirety of Turkish-US relations.

Trump is truly alone in his affection for Erdogan. No one, even in his own administration, shares this affinity; quite the contrary. Defense Secretary Mark Esper, for instance, told an Oct. 24 gathering in Brussels that Turkey put the United States “in a very terrible situation” by launching an “irresponsible incursion into northern Syria” that “jeopardizes the gains made there [against IS] in recent years.” Remarkably, Esper was speaking just a day after Trump lifted the sanctions on Turkey, seemingly unperturbed to openly contradict the president.

That Trump calls Erdogan his “friend” might suggest the two are on good terms, but such amity between leaders is hardly enough to run bilateral ties between countries, especially if one of them has strong checks and balances. Hence, the Trump-Erdogan amity does not change the fact that Turkish-US ties are going through the most ravaging crisis in their history.

The relationship had emerged badly damaged from its most critical test in the aftermath of the Cold War in 2003, when Turkey’s parliament denied US forces permission to use Turkish territory to invade Iraq from the north. Consequently, the relationship lost its “strategic” character. Washington’s view of Ankara deteriorated as Turkey’s foreign policy took a markedly anti-Israeli and anti-Western turn from 2009 on. Then, from 2014 on, Washington caused a deep confidence crisis in Ankara by arming and training the YPG, the Syrian extension of the separatist Kurdistan Workers Party (PKK); Turkey views the PKK as a terrorist group and has fought it for more than three decades. To make things worse, the failed coup attempt in Turkey on July 15, 2016, led Ankara to believe that Washington is protecting the Gulenist network, which spearheaded the putsch. Since then, Ankara’s mistrust in its former ally has grown into a perception of threat.

In sum, the two NATO members remain allies only on paper, but the realities on the ground do not corroborate even that, let alone a strategic partnership.

Relations with Turkey were already forlorn in Washington before Turkey launched Operation Peace Spring on Oct. 9. The clout of the State Department —- arguably the sole US institution trying to salvage bilateral ties — has significantly waned under Trump, while Congress and the Pentagon stand out as the bodies where indignation with Erdogan runs the highest.

The personal amity between Trump and Erdogan is, in fact, damaging to both of them due to the growing bilateral mistrust at the institutional level. The indignation that US institutions feel when it comes to Trump and Erdogan, for different reasons, creates a multiplier effect when their amity manifests itself, as the case of Operation Peace Spring has shown.

For the US establishment and legislature, Trump’s foreign policy is too erratic, unpredictable, personalized and impulsive. The indignation they feel when it comes to Trump over these issues winds up being reflected on Erdogan, and their anger against Erdogan is reflected on Trump. That’s how the zeal to sanction Turkey is swelling in Congress. And as a result of all those negative dynamics, isolating Turkey is becoming a trend.

Because of Trump’s alleged personal ties with Putin, the US establishment and Congress have viewed the White House’s foreign policy with a degree of mistrust from the very outset. The Countering America’s Adversaries Through Sanctions Act (CAATSA), passed in 2017 with bipartisan support, was one of the early attempts of the legislature to keep Trump under control. The act tasks the president with levying sanctions on Russia’s arms industry and buyers of significant weapons from Russia under close congressional oversight.

Turkey became a potential target of CAATSA sanctions this summer as it took delivery of the strategic S-400 air defense systems from Russia. Trump has been reluctant to go ahead. He has even argued that the Obama administration’s refusal to sell Turkey the US Patriot systems had pushed Ankara to purchase the S-400s.

Thus far, exclusion from the F-35 joint strike fighter program is the only penalty that Turkey has faced for buying the Russian systems. Trump’s reluctance to sanction Turkey under CAATSA appears to have further vexed Congress, as evidenced by the far-reaching bipartisan sanctions bill that the House advanced Oct. 29 against Turkey over its operation in Syria.

The bill, which passed 403-16, is not limited to sanctions that would target senior Turkish officials involved in the operation and prevent the sale of weapons that Turkey could use in the campaign. It would also require the Trump administration to go ahead with sanctions on two issues beyond the operation. The first pertains to Turkey’s state-owned lender Halkbank, which US prosecutors accuse of taking part in a scheme to evade US sanctions against Iran. Second, the bill would oblige the president to penalize Turkey under CAATSA over the S-400 purchase.

Congressional anger with Erdogan is directly reflected in the bill, which, intriguingly, was voted as Turkey celebrated its Republic Day. The bill would require US authorities to investigate the wealth of Erdogan and his family and the president to take measures to freeze any US-related assets.

Hailing the bill, Democratic House Speaker Nancy Pelosi signaled a rebuke of Trump’s personal amity with Erdogan. “Today Democrats and Republicans come together to demonstrate the strong, smart leadership that has certainly been lacking from the White House,” she said.

Senate Republican Majority Leader Mitch McConnell appears reluctant to back such sanctions against a NATO ally, but a buildup of bipartisan support, similar to that in the House, would make it hard for him to resist.

On Oct. 29, House members also passed a resolution 405-3 recognizing the World War I massacres of Armenians under the Ottoman Empire as genocide. Thus, decades of Turkish diplomatic efforts to prevent such a move in Congress went down the drain.

In sum, the Erdogan government’s attempts to resolve all issues with the United States on the basis of its highly personalized relationship with Trump have produced grave consequences for Turkey by provoking reckless interventions by Congress. As a result, Turkey’s isolation is growing and bilateral ties are heading toward an inextricable and destructive mess.

Kadri Gursel is a columnist for Al-Monitor’s Turkey Pulse. He focuses mainly on Turkish foreign policy, international affairs, press freedom and Turkey’s Kurdish question as well as Turkey’s evolving political Islam and its national and regional impacts. He wrote a column for the Turkish daily Cumhuriyet from May 2016 to September 2018 and for the daily Milliyet from 2007 to July 2015. Gursel also worked for Agence France-Presse from 1993 to 1997. While with AFP, he was kidnapped by Kurdish militants in 1995. He recounted his misadventures at the hands of the PKK in the book “Dağdakiler” (Those of the Mountains).