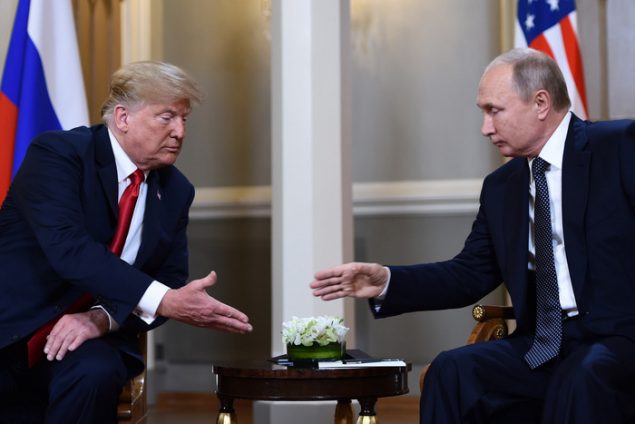 This news piece from CNN clearly suggests that the cracks are beginning to show and to see this on mainstream media is an interesting development.

By Kaitlan Collins and Kevin Liptak

After US expectations were dashed this week for a transition of power in Venezuela, President Donald Trump is urging caution among senior advisers moving forward and expressing frustration that some aides are more openly teasing military intervention, according to officials familiar with the matter.

After a phone call with President Vladimir Putin on Friday, Trump also downplayed Russia’s involvement in Venezuela, contradicting claims from top Trump administration officials that Moscow continues to prop up the regime there.

It amounted to, at times, a picture of a President at odds with the officials who this week have called vociferously for a change in power in Caracas and have consistently declined to rule out a US military intervention.

Trump has become frustrated this week as national security adviser John Bolton and others openly teased military options and has told friends that if Bolton had his way he’d already be at war in multiple places.

Trump has long stated that “all options are on the table” when it comes to Venezuela, where embattled President Nicolas Maduro is clinging to power despite street protests and withering US sanctions. But aides have appeared to lean further into military options in recent days as an uprising led by opposition leader Juan Guaido, whom the US recognizes as the country’s legitimate president, has failed to topple him.

Secretary of State Mike Pompeo told a Fox News interviewer that “military action is possible. If that’s what’s required, that’s what the United States will do.” And Bolton has pressed the Pentagon for military options and told an interviewer this week the US would not allow Guaido be mistreated.

But Trump, who has until now given Bolton wide leeway to manage the situation in Venezuela, appeared more cautious this week, privately expressing concern over how solid Guaido’s plans are to take power and win support from Venezuela’s military.

“Bolton is executing the President’s strategy of maximum pressure to achieve a peaceful transition to democracy in Venezuela. As President Trump himself has made clear, all options are on the table,” Marquis said in a statement.

Questions about the reliability of US intelligence

The President’s skepticism was sparked after the military uprising that Guaido and some US officials were counting on failed to gain steam — leading him to ask to questions about the reliability of US intelligence that suggested senior members of Maduro’s inner circle were preparing to defect.

In meetings throughout the week, Trump has pressed aides on how reliable the information coming from Guaido and Venezuela was and whether it was being interpreted properly, according to people familiar with the conversations.

There was a very brief principals meeting at the White House on Wednesday to discuss additional steps forward in Venezuela, but it only lasted around 10 to 15 minutes, a person familiar with the meeting said. Bolton attended the session, but Trump did not.

“This was really a true review and then making sure that we’re all in alignment,” acting Defense Secretary Patrick Shanahan told reporters after the meeting. “We have a comprehensive set of options tailored to certain conditions, and I’m just going to maybe leave it at that.”

His circumspect answer reflected a desire from Trump to maintain a more guarded public stance on the prospect of military action, which he has not ruled out.

Bolton has sometimes used his hawkish reputation to his advantage. Many Trump advisers (including some former officials) believe Bolton’s infamous “5,000 troops to Colombia” note scribbled on a yellow legal pad in view of cameras was intentional to send a message to Maduro, and the White House never fully explained it.

‘All options are on the table’

The President, however, has told his aides he wants to stick with the line that “all options are on the table,” without specifically referencing military action. In an interview with Fox News on Thursday evening, Trump alluded to military action but not specifically.

“We have lots of options and some of them are very tough options,” he said.

Trump’s hesitance to elaborate what his military options are is in line with his long-held — though sometimes not adhered to — view that presidents should not telegraph their military intentions ahead of time. And his reluctance to wade into another foreign conflict matches an anti-interventionist stance that he’s adopted in Syria and Afghanistan.

But it puts him somewhat at odds with his allies, including Sen. Lindsey Graham, who openly advocated a tougher military approach toward Venezuela on Friday.

“Cuba, Russia send troops to prop Maduro up in Venezuela…….while we talk/sanction. Where is our aircraft carrier?” he wrote on Twitter.

Trump is eager to see Maduro leave power but has made clear to advisers that he does not want to order a mission that would turn into an extended engagement with unforeseen consequences, people familiar with the matter said.

Trump has privately linked the Venezuela situation to politics, particularly in Florida, and some Trump political advisers see a political upside if Maduro leaves office. They believe Venezuelan-American voters in Florida might be more inclined to vote for Trump and Republicans if Maduro goes. And Cuban-American voters (who already lean Republican) might be galvanized to support Trump as well.

Trump administration officials appeared to believe on Tuesday morning that protests led by Guaido would topple Maduro from power. But by the end of the day it was clear Maduro would remain, at least for now.

Appearing on CNN, Pompeo partly blamed the Russians, saying Maduro was prepared to depart the country for Havana before being convinced by Moscow to stay.

But Trump later downplayed those reports as “rumors” during an interview on Fox Business Network, and on Friday, after speaking by phone with Putin, said he was convinced Russia did not want to meddle in the country’s affairs.

“He is not looking at all to get involved in Venezuela other than he’d like to see something positive happen for Venezuela,” Trump said in the Oval Office. “And I feel the same way.”

Regrettably we have not be able to add the video included in the CNN story.