U.S. President Donald Trump retweeted a series of inflammatory videos on Wednesday, November 29 purporting to show violence being committed by Muslims. Trump retweeted them from Jayda Fransen, the deputy leader of the far-right group Britain First, a small fringe group whose profile was elevated by Trump’s attention. 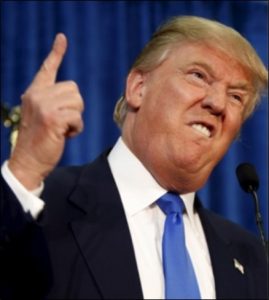 The group’s tweets read: “VIDEO: Islamist mob pushes teenage boy off roof and beats him to death!” and “VIDEO: Muslim Destroys a Statue of Virgin Mary!” and “VIDEO: Muslim migrant beats up Dutch boy on crutches!” The origins of the videos could not immediately be determined.

Britain First is a far-right group that opposes multiculturalism and what it calls the “Islamization” of Britain. It has run candidates in local and national elections, with little success, and has campaigned against the construction and expansion of mosques.

The fallout begins: Donald Trump’s ‘working visit’ to UK dropped as tensions with Theresa May grow over president’s far-right retweets, The Telegraph, Dec 1, 2017

Trump did not offer any explanation for why he retweeted the videos. The retweets came amid a flurry of early morning Trump posts, providing a diversion from several other issues, including the possible government shutdown, the Republican tax plan and a missile launch by North Korea on Tuesday.

British Prime Minister Theresa May’s spokesperson James Slack said Trump was wrong to share Fransen’s anti-Muslim videos. He said Britain First seeks to divide communities through its use of “hateful narratives which peddle lies and stoke tensions.” He added: “It is wrong for the president to have done this.”

But May’s office said an invitation for Trump to pay a state visit to Britain was not being withdrawn. Opposition politicians were calling for the visit to be cancelled after the far-right retweets.

Wednesday evening, Trump addressed May on Twitter — albeit using an incorrect Twitter account — saying “don’t focus on me, focus on the destructive Radical Islamic Terrorism that is taking place within the United Kingdom. We are doing just fine!”

Asked if the president had a responsibility to verify the content, Sanders said: “Whether it’s a real video, the threat is real and that is what the president is talking about.” However, in a reply to Trump’s retweet, the Netherlands Embassy corrected some of the tweet saying the person identified as a “migrant” was born and raised in the Netherlands and was sentenced under Dutch law.

Sanders said she hadn’t discussed with Trump how it might affect his relationship with the British prime minister.

The Council on American-Islamic Relations (CAIR) strongly condemned Trump’s tweets. Nihad Awad, the group’s executive director, said in a statement that Trump is “clearly telling members of his base that they should hate Islam and Muslims.” In an interview with CBC News Network, Awad said there is “no question” that Trump hates Muslims. He hates Muslims, he hates Latinos, he hates African Americans, he hates people who do not look like him or believe in his divisive politics,” Awad said.

“We do not allege this. I mean, every policy, every tweet that he says is very divisive, not only against Muslims but other minorities in this country.”

CAIR is calling on Republican leadership to step in to assure that Trump’s policies to not overtake the party. “[And they will] not allow this president or any other president to shred and throw away our constitution by bullying or picking on anyone like the American Muslim community,” Awad said.

‘We love him’: ex-Klan leader

The American Civil Liberties Union said in a tweet: “Trump’s prejudice against Muslims reveals itself at every turn — with today’s tweets meant to gin up fear and bias, with statements like ‘Islam hates us,’ and with every version of the Muslim ban.”

Former Ku Klux Klan leader David Duke welcomed the videos, tweeting: “Trump retweets video of crippled white kid in Europe being beaten by migrants, and white people being thrown off a roof and then beaten to death, He’s condemned for showing us what the fake news media WON’T. Thank God for Trump! That’s why we love him!”

In London on Wednesday, CBC News reporter Thomas Daigle spoke with Jayda Fransen, who said she was delighted by his support. “I can say with some certainty that myself and President Donald Trump see eye-to-eye on a number of issues, not least the issue of Islamic immigration,” she said.

“I understand that President Trump is aware of my plight here in the U.K. He’s aware of that fact that I’m facing prison for having given a speech in which I criticized Islam as an ideology … and I thank him for his public support.”

British opposition politicians demanded their government revoke the invitation to Trump after the retweets. Labour Party lawmaker David Lammy tweeted: @realDonaldTrump you are not welcome in my country and my city.” Another Labour legislator, Chuka Umunna, said an invitation to Trump to visit the United Kingdom “should be withdrawn.”

May announced in January that Trump had accepted an invitation for a state visit to Britain, though no date has been set.

It’s not the first time Trump has retweeted inflammatory content or posts from controversial Twitter accounts. He has shared messages from accounts that appeared to have ties to white nationalist [sic] groups. He has retweeted a conservative Trump supporter who used social media to draw attention to ‘pizzagate’, an unfounded conspiracy theory that claims Democrats harbour child sex slaves at a pizza restaurant.

He has also retweeted doctored videos, including one that appeared to show him hitting Hillary Clinton with a golf ball.

Throughout his presidential campaign, Trump offered anti-Muslim commentary, saying he would “strongly consider” closing mosques and insisting that “Islam hates us.” As president he has sought to ban travel from majority-Muslim countries. He said earlier this year that “we have to stop radical Islamic terrorism.”

After Trump retweeted the videos, Jayda Fransen quickly responded on Twitter, saying in all-capital letters: “Donald Trump himself has retweeted these videos and has around 44 million followers! God bless you Trump! God bless America!”

Fransen has been charged with causing religiously aggravated harassment over leaflets and videos that were distributed during a criminal trial earlier this year. She has separately been charged with using “threatening, abusive or insulting words or behavior” over a speech she made in Northern Ireland in August. She is currently on bail.

She was convicted last year of religiously aggravated harassment and fined after hurling abuse at a Muslim woman wearing a hijab.

Trump’s retweets were condemned by Brendan Cox, whose lawmaker wife Jo Cox was murdered last year by an attacker with far-right views. He tweeted: “Trump has legitimised the far right in his own country, now he’s trying to do it in ours. Spreading hatred has consequences & the President should be ashamed of himself.”

Trump’s tweets were also condemned by TV host Piers Morgan who tweeted: “Good morning, Mr President @realDonaldTrump — what the hell are you doing retweeting a bunch of unverified videos by Britain First, a bunch of disgustingly racist far-right extremists? Please STOP this madness & undo your retweets.”

Donald Trump hit back at Theresa May last night after she criticised the US president for re-tweeting three anti-Muslim videos posted by a British far-Right group. Mr Trump wrote on Twitter: “Theresa, don’t focus on me, focus on the destructive Radical Islamic Terrorism that is taking place within the United Kingdom. We are doing just fine!”

He tweeted @theresamay, which is not the Twitter account of the Prime Minister, before correcting the mistake about 20 minutes later…

[Theresa May has called Donald Trump’s racist tweets “the wrong thing to do”.]

… Historians struggled to name any parallel for Mr. Trump’s actions in modern presidential politics. President Richard Nixon gave free rein to his prejudices against Jews and African-Americans in private, but did not voice them in public. Prior to becoming president, Franklin Delano Roosevelt wrote articles describing his repugnance at the idea of Japanese immigrants coming to the United States and intermarrying with Americans. Then he presided over the internment of more than 100,000 Japanese-Americans during the Second World War. But he did not use the platform of his presidency to stoke prejudice, said Greg Robinson, a historian at the University of Quebec and the author of a book on FDR’s internment of Japanese-Americans.

Mr. Trump’s open embrace of anti-Muslim views “is without precedent” in the modern era, Prof. Robinson said. “I can’t think of any other time that a president publicly endorsed prejudice against a minority.”…

[Editorial ends with a whimper: “Mr. Trump should remove those tweets and apologize for posting them.” A Globe editorial on November 28 described Trump as a “below-average president”.]

It started as a tax cut. Now it could change American life, by Peter S. Goodman and Patricia Cohen, New York Times, Nov 29, 2017