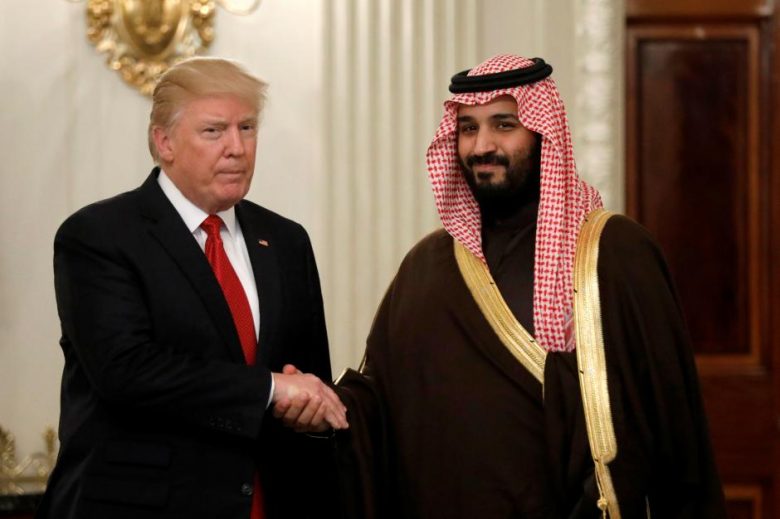 President Trump’s extraordinary statement of support and repetition of the Saudi claim that murdered journalist was an ‘enemy of the state’ appears to be a presidential act of defiance against the CIA, which has reportedly concluded that the Saudi prince ordered the killing, and the Senate, which is considering bipartisan legislation that would suspend weapons sales to Saudi Arabia among other punitive measures.  It can also be construed as a calculated snub against the Turkish president.

By Martin Chulov in Beirut and Julian Borger in Washington

Donald Trump has expressed his unstinting support for Saudi Arabia and claimed there was “nothing definitive” linking Crown Prince Mohammed bin Salman to the murder of the Washington Post columnist Jamal Khashoggi.

In the extraordinary statement issued on Tuesday – which begins with the words “The world is a very dangerous place!” – Trump quotes Saudi officials as describing Khashoggi as an “enemy of the state”.

The 649-word statement appears to be a presidential act of defiance against the CIA, which has reportedly concluded that the Saudi prince ordered the killing, and the Senate, which is considering bipartisan legislation that would suspend weapons sales to Saudi Arabia among other punitive measures.

He told reporters at the White House that the CIA “didn’t make a determination” on the murder, and that they had “nothing definitive” on its perpetrator. The claim is contradicted by multiple reports that the intelligence agency has concluded that Prince Mohammed ordered the hit on the former Saudi insider who had become a persistent critic.

In his written statement, Trump wrote: “Our intelligence agencies continue to assess all information, but it could very well be that the crown prince had knowledge of this tragic event – maybe he did and maybe he didn’t!

“That being said, we may never know all of the facts surrounding the murder of Mr Jamal Khashoggi. In any case, our relationship is with the Kingdom of Saudi Arabia.”

As he has in the past with Vladimir Putin, Trump put official denials of wrongdoing from Riyadh on a par with US intelligence assessments.

He said: “King Salman and Crown Prince Mohammad bin Salman vigorously deny any knowledge of the planning or execution of the murder of Mr Khashoggi.”

The president acknowledged that Congress might have another view and the strength of congressional opinion soon became apparent when the Republican senator Lindsey Graham – otherwise a fervent Trump fan – issuing a statement predicting “strong bipartisan support for serious sanctions against Saudi Arabia, including appropriate members of the royal family, for this barbaric act which defied all civilized norms”.

The South Carolina senator added: “While Saudi Arabia is a strategic ally, the behavior of the crown prince – in multiple ways – has shown disrespect for the relationship and made him, in my view, beyond toxic.”

Fred Ryan, the publisher and CEO of the Washington Post, said: “The CIA has thoroughly investigated the murder of this innocent journalist and concluded with high confidence that it was directed by the crown prince. If there is reason to doubt the findings of the CIA, President Trump should immediately make that evidence public.”

Trump’s statement, titled “standing with Saudi Arabia” sought to portray the kingdom as an essential US ally in a struggle against Iran, and an irreplaceable customer for US arms sales.

He claimed a breach in the relationship between Washington and Riyadh would produce an oil price spike.

“If you want to go see oil prices go to $150 a barrel, all you have to do is break up our relationship with Saudi Arabia,” Trump said in his remarks to reporters.

His statement made a series of false or unsubstantiated claims, suggesting that Riyadh is buying $110bn in US weapons. The actual total of offers since Trump took office is less than $15bn, and the value of actual signed contracts is significantly lower than that.

A new independent report found that US arms sales to Saudi Arabia account for fewer than 20,000 US jobs a year – less than a 20th of the employment boost Donald Trumphas claimed.

Trump said in his statement: “The crime against Jamal Khashoggi was a terrible one, and one that our country does not condone.” He pointed out that the US has imposed individual sanctions on 17 Saudis identified by Riyadh for their alleged involvement in the 2 October murder.

If you want to go see oil prices go to $150 a barrel, all you have to do is break up our relationship with Saudi Arabia…

The president said that “representatives of Saudi Arabia say that Jamal Khashoggi was an ‘enemy of the state’ and a member of the Muslim Brotherhood”.

Trump added: “My decision is in no way based on that.” But he did not explain why he mentioned the smear against Khashoggi at all.

The US secretary of state, Mike Pompeo, when asked about the Saudi monarchy’s complicity in Khashoggi’s death, said: “It’s a mean, nasty world out there.”

Pompeo declined to comment on intelligence assessments of the murder, but said: “Facts will obviously still continue to come to light. I’m confident of that. It’s the way the world works.”

Nicholas Burns, the under-secretary of state for political affairs in the George W Bush administration, said: “This Trump statement on the Khashoggi murder is beyond embarrassing. It is shameful.He is silent on our most important interest – justice.”

Trump’s enthusiastic support for Riyadh coincides with a drive by the crown prince to rehabilitate himself on the world stage. The Argentinian government confirmed to the Guardian on Tuesday that he is on the list of attendees at the G20 summit at the end of the month in Buenos Aires.

Also on the guest list is Turkey’s president, Recep Tayyip Erdoğan, who has condemned Riyadh for the murder and whose government has put out a steady stream of leaks from the investigation, pointing towards Saudi government culpability at the highest levels.

In the latest of those leaks, the influential pro-government outlet Habertürk published excerpts of a purported transcript of an audio recording of the murder.

According to its account, the Saudi hitman chosen as a lookalike among Jamal Khashoggi’s assassins was apparently recorded saying: “It’s creepy to wear the clothes of a man we killed 20 minutes ago.” He then he stepped from the Kingdom’s consulate in Istanbul in a failed attempt to prove the murdered dissident had left the building.

The chilling detail was among the latest excerpts released by Turkish officials seven weeks after Khashoggi was murdered. Other details include Khashoggi demanding, “Release my arm, what do you think you’re doing?” moments after entering the diplomatic mission.

A listening device inside the consulate apparently captured Maher Mutreb, a trusted aide of Prince Mohammed, replying: “Traitor, you will be brought to account.”

Saudi Arabia’s alliances are being tested as never before