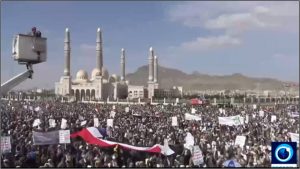 Thousands protest in Yemen capital of Sana’a on May 21, 2017 against Donald Trump arms sales tour to Saudi Arabia

Thousands of people gathered in the streets of the Yemen capital of Sana’a on May 20 to protest the U.S.’s participation in Saudi Arabia’s relentless war against the country.

The Saturday mass protests coincided with a trip by U.S. President Donald Trump to Riyadh [Saudi Arabia capital] in which he finalized a massive arms deal with Saudi Arabia worth almost $110 billion. [News report below.]

During the protests, people could be seen holding banners which read. “USA thrives on stealing other nations, killing, crime and causing destruction.”

Another protester stressed that Saudi Arabia “will suffer a humiliating defeat, with or without U.S. and Israeli support.”

The demonstrators also hailed the ballistic missile attack launched by Yemeni forces against Riyadh just hours before Trump’s arrival in the Saudi capital.

Since March 2015, Saudi warplanes have been bombarding Yemen heavily in an attempt to crush the popular Houthi Ansarullah movement and reinstate the resigned president, Abd Rabbuh Mansur Hadi.

Latest tallies show that the imposed war has so far killed over 12,000 Yemenis and wounded thousands more. The Saudi aggression has also taken a heavy toll on the country’s facilities and infrastructure, destroying many hospitals, schools, and factories.

Nearly 3.3 million Yemenis, including 2.1 million children, are currently suffering from acute malnutrition, while more than seven million people are grappling with starvation. The figures, however, could drastically increase if the Saudi war machine continues to breathe fire on Yemeni people.

DUBAI, United Arab Emirates — On his first overseas visit, President Donald Trump presided over a nearly $110 billion sale of military equipment to Saudi Arabia that made clear his administration did not see the kingdom’s human rights record or its devastating war in Yemen as an obstacle to restoring ties that had been strained [sic] under his predecessor.

The military agreement with Saudi Arabia, effective immediately, could expand up to $350 billion over 10 years. It appeared to reverse an Obama administration decision to pull back sales of precision-guided munitions to Saudi’s armed forces over concerns sparked by a Saudi-led coalition bombing of a funeral hall in Yemen that killed more than 140 people. It also surpasses the total amount of deals offered to Saudi Arabia in President Barack Obama’s eight years in office…

Read the full AP article at the original weblink above.

Yemenis fire ballistic missile at Riyadh ahead of Trump visit, Press TV, May 19, 2017