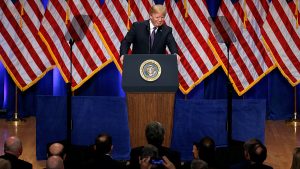 Donald Trump announces a new ‘national security strategy’ for the U.S. on Dec 18, 2017, ramping up threats against Russia and China (photo by Joshua Roberts, Reuters)

WASHINGTON — President Donald Trump declared a new national security strategy on Monday, December 18, stressing the “America first” message of his 2016 campaign and faulting previous U.S. leaders for failing to measure up to it and look out for the nation’s citizens.

“Our leaders engaged in nation building abroad while they failed to build up and replenish our nation at home,” he said, pointing to the economy’s strong performance and predicting even better under his policies.

His security strategy envisions nations in constant competition, reverses Obama-era warnings on climate change and affirms that the United States will unilaterally defend its sovereignty, even if that means risking existing the agreements with other countries that have dominated the United States’ foreign policy since the Cold War.

Trump’s doctrine holds that nation-states are in perpetual competition and that the U.S. must fight on all fronts to protect and defend its sovereignty from friend and foe alike. While the administration often says that “America First” does not mean “America Alone,” the national security strategy makes clear that the United States will stand up for itself even if that means acting unilaterally or alienating others on issues such as trade, climate change and immigration.

The last such strategy document, prepared by President Barack Obama in 2015, declared climate change an “urgent and growing threat to our national security.” The Trump plan removes that determination — following the administration’s threat to pull out of the Paris climate accord. The strategy sets a goal of being an “energy-dominant nation” and says that the United States “recognizes the importance of environmental stewardship.”

Despite the risk of potential isolation presented by Trump’s strategy, its fundamentals are not a surprise. The strategy emphasizes that U.S. economic security is national security. And it stresses that the U.S. is interested only in relationships with other countries, including in alliances such as NATO, that are fair and reciprocal.

The strategy also details the threats of “rogue regimes,” like North Korea. It says that China and Russia “challenge American power, influence, and interests, attempting to erode American security and prosperity.”

Despite international challenges, the document cites emerging opportunities to advance American interests in the Middle East. “Some of our partners are working together to reject radical ideologies and key leaders are calling for a rejection of Islamist extremism and violence,” it says. “Encouraging political stability and sustainable prosperity would contribute to dampening the conditions that fuel sectarian grievances.”

The strategy document asserts that “for generations the conflict between Israel and the Palestinians has been understood as the prime irritant preventing peace and prosperity in the region. Today, the threats from radical jihadist terrorist organizations and the threat from Iran are creating the realization that Israel is not the cause of the region’s problems. States have increasingly found common interests with Israel in confronting common threats.”

The criticism of Russia will come as a break from recent warm words between Trump and Russian President Vladimir Putin. The leaders have spoken twice in four days, with Trump calling Putin to thank him for kind words about the U.S. stock market and Putin reaching out to Trump to thank the CIA for help in stopping a terror plot in St. Petersburg.

The strategy document also notes that “actors such as Russia are using information tools in an attempt to undermine the legitimacy of democracies.”

Under Trump, climate change not a national security threat

President Donald Trump removed climate change from the list of worldwide threats menacing the United States on Monday, a shift that underscores the long-term ramifications of the “America first” world view he laid out in his new National Security Strategy.

The document depicts Russia and China as combative rivals in perpetual competition with the U.S. But it makes no mention of what scientists say are the dangers posed by a warming climate, including more extreme weather events that could spark humanitarian crises, mass migrations, and conflict.

It’s a significant departure from the Obama administration, which had described climate change as an “urgent and growing threat to our national security.” And it demonstrates how Trump, despite struggling to push his own agenda through a Republican-controlled Congress, has been able to unilaterally dismantle one of his predecessor’s signature efforts.

Excerpts (weblinks are above):

… This strategy recognizes that, whether we like it or not, we are engaged in a new era of competition. We accept that vigorous military, economic, and political contests are now playing out all around the world.

We face rogue regimes that threaten the United States and our allies. We face terrorist organizations, transnational criminal networks, and others who spread violence and evil around the globe.

We also face rival powers, Russia and China, that seek to challenge American influence, values, and wealth. We will attempt to build a great partnership with those and other countries, but in a manner that always protects our national interest.

From ‘A New National Security Strategy for a New Era’:

… China and Russia challenge American power, influence, and interests, attempting to erode American security and prosperity. They are determined to make economies less free and less fair, to grow their militaries, and to control information and data to repress their societies and expand their inf luence. At the same time, the dictatorships of the Democratic People’s Republic of Korea and the Islamic Republic of Iran are determined to desta- bilize regions, threaten Americans and our allies, and brutalize their own people. Transnational threat groups, from jihadist terrorists to transna- tional criminal organizations, are actively trying to harm Americans. While these challenges dif- fer in nature and magnitude, they are fundamen- tally contests between those who value human dignity and freedom and those who oppress individuals and enforce uniformity.

These competitions require the United States to rethink the policies of the past two decades—policies based on the assumption that engagement with rivals and their inclusion in international institutions and global commerce would turn them into benign actors and trustworthy partners. For the most part, this premise turned out to be false. Rival actors use propaganda and other means to try to discredit democracy.  ey advance anti-Western views and spread false information to create divi- sions among ourselves, our allies, and our partners. In addition, jihadist terrorists such as ISIS and al-Qa’ida continue to spread a barbaric ideology that calls for the violent destruction of governments and innocents they consider to be apostates.  These jihadist terrorists attempt to force those under their inf luence to submit to Sharia law.

America’s military remains the strongest in the world. However, U.S. advantages are shrinking as rival states modernize and build up their conventional and nuclear forces. Many actors can now field a broad arsenal of advanced missiles, including variants that can reach the American homeland. Access to technology empowers and emboldens otherwise weak states. North Korea—a country that starves its own people—has spent hundreds of millions of dollars on nuclear, chemical, and biological weapons that could threaten our homeland. In addition, many actors have become skilled at operating below the thresh old of military conf lict—challenging the United States, our allies, and our partners with hostile actions cloaked in deniability. Our task is to ensure that American military superiority endures, and in combination with other elements of national power, is ready to protect Americans against sophisticated challenges to national security.

The contest over information accelerates these political, economic, and military competitions. Data, like energy, will shape U.S. economic prosperity and our future strategic position in the world. The ability to harness the power of data is fundamental to the continuing growth of America’s economy, prevailing against hostile ideologies, and building and deploying the most effective military in the world. We learned the difficult lesson that when America does not lead, malign actors fill the void to the disadvantage of the United States…

… President Donald Trump, in his introductory letter, pledges to “put the safety, interests, and well-being of our citizens first,” and the very first chapter — or “pillar,” as the document has it — proclaims that the United States will “protect the American people, the American way of life, and American interests.” However, almost nothing in the 68-page document deals with the actual domestic threats, risks, and systemic harms that Americans experience every day.

*  UN Security Council votes 14 to one that U.S. rescind its decision to recognize Jerusalem as the capital of Israel, Associated Press, Dec 18, 2017

… The resolution that was vetoed by the U.S. would have called on “all states to refrain from the establishment of diplomatic missions in the holy city of Jerusalem,” citing a 1980 Security Council resolution.

*  Is Russia souring on Donald Trump?, interview by Jacob Heilbrunn with Professor Andranik Migranyan, published in The National Interest (conservative magazine in the U.S.), Dec 7, 2017

Andranik Migranyan is a professor at the Moscow State Institute of International Relations (an academic institution run by the Ministry of Foreign Affairs of Russia).

Excerpt:
… Jacob Heilbrunn: Is Russia souring on Donald Trump? Julia Ioffe, who has reported for many years on Russia, has a new cover story in the January-February issue of The Atlantic called ‘What Putin Really Wants’ [The Atlantic‘s lengthy, anti-Russia rant is here]. The thrust seems to be that when it comes to Trump, Putin has a case of buyer’s remorse.

Andranik Migranyan: She interviewed me twice. Russia is not sour or dissatisfied. President Putin said that recently again when he was asked about Trump. He is a realist. They listen endlessly to statements of Trump and he might be the politician who is constantly saying that it’s better to have good relations with Russia. He is handicapped, among other things, by Congress. So Trump is not the solution. He is the problem in Russian-American relations. The problems are clear, starting with the idea of Trump’s connections with Russian authorities. Congress is using it as a cudgel. The media is using it. There is no shift in Russia itself. But there is an understanding that Trump can’t deliver on anything. This is what Russian officials have come to conclude.