Trump: ‘Russia Has to Get Out’ of Venezuela 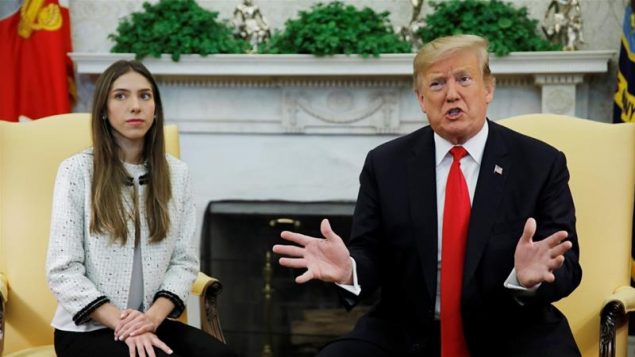 Addressing the Venezuela political crisis this week, Trump issues warnings against Russia and tells reporters he will “fix” Venezuela.

US President Donald Trump addressed the Venezuelan political crisis on Wednesday, issuing warnings against Russia and vowing once more that “all options are open.”

“Russia has to get out,” Trump told reporters during a White House meeting with Fabiana Rosales, wife of self-proclaimed Venezuelan “Interim President” Juan Guaido, who is currently in the US after visiting several Latin American countries.

Trump added that situations like Venezuela “should never have happened,” and promised to “fix it,” pledging full support for Guaido. The US was the first to recognize Guaido after he swore himself in on January 23. Repeatedly calling on the Venezuelan military to oust Maduro, US officials have imposed successive rounds of harsh economic sanctions, including an oil embargo. Both governments severed diplomatic ties on March 12 following unsuccessful attempts to downgrade embassies to interests sections.

Trump’s comments come as the US House of Representatives unanimously approved three bills concerning Venezuela on Monday. The first bill is meant to restrict exports of crowd control equipment, including tear gas and riot gear, while the second urges Trump to provide up to US $150 million in humanitarian aid. The third bill calls on the State Department and intelligence agencies to assess the “threat of Russian influence” in Venezuela.

Two Russian military airplanes landed in Caracas’ Maiquetia airport on Sunday, carrying equipment and 100 servicemen, including General Vasily Tonkoshkurov, chief of staff of Russian ground forces. Russia, which is one of Venezuela’s main arms suppliers clarified that mission was intended to fulfil technical and military cooperation contracts. Moscow had previously sent military aircraft to Venezuela in December as part of bilateral defense accords. Russia has voiced opposition to what it terms a Washington-led regime change operation in Caracas.

Venezuelan President Nicolas Maduro announced on Tuesday that a high-level meeting between Venezuela and Russia is set to take place in Russia, with more than 20 agreements on economy, trade, energy and education to be signed.

The strengthening of bilateral ties comes as Venezuela suffered its second major power outage in less than a month this week, after what authorities denounced as a “double attack” against the electric grid that left most of the country without power.

Electricity started to be restored to most of the country, with a new setback occurring on Wednesday morning, from which most states had recovered at the time of writing. The western state of Zulia remains the only one that has been mostly without power since Monday evening. Labor and school activities were suspended on Tuesday, Wednesday and Thursday as authorities work to stabilize the electrical supply in order to reactivate services like the Caracas Metro.

Opposition leader Juan Guaido held a meeting with supporters and press on Wednesday to offer more details on what he calls “Operation Freedom.” Echoing Trump, Guaido stressed that “all options should be on the table,” while reiterating his call for the armed forces to support his efforts at ousting the Maduro government.

Guaido called for protests against the electricity problems around the country this weekend, with locations to be announced later, and for a “dry-run” of “Operation Freedom” to be held on April 6. He stressed that communication and organization were key elements of the operation, but offered no further details as to what the dry-run entails.

Speaking in Venezuela’s National Assembly on Tuesday, the opposition leader warned that problems in access to electricity and other basic services would be exacerbated as long as President Nicolas Maduro remained in power.

“There will be no solutions to the problems of electrical supply while [Maduro] usurps functions in Miraflores [presidential palace], there will not be water reaching [people’s] homes and much less domestic gas,” he declared. “We are going to accelerate the necessary internal pressure.”

Venezuelan authorities had previously revealed what they claimed was evidence of Guaido’s involvement, along with other right-wing leaders, in a plot to contract foreign paramilitaries to execute targeted killings and acts of sabotage in the country. Guaido’s chief of staff, Roberto Marrero, was arrested last week and accused of direct links to the mercenaries. Lawyer Juan Planchart was also arrested on Sunday for his alleged role as a financial intermediary.

Edited and with additional reporting from Lucas Koerner in Caracas.