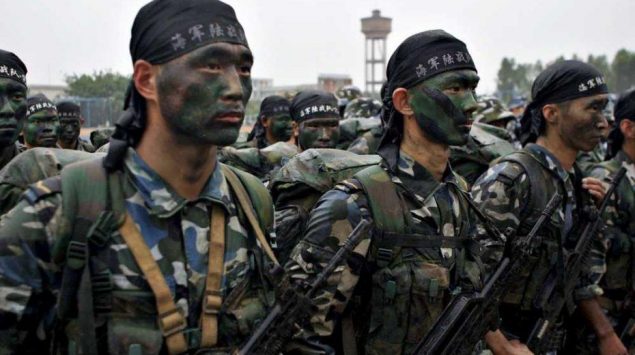 The Trump administration appears to be blatantly exploiting secessionist tensions between Taiwan and mainland China. By massively arming the island, there is a danger that Taiwanese separatists will feel emboldened to declare independence, a move which Beijing has always said would trigger it to deploy military force in order to assert its sovereignty.

The Trump administration last week cut its fourth and biggest arms sale to Taiwan, sparking a furious condemnation from Beijing that the US was undermining its sovereignty and “grossly interfering in China’s internal affairs”.

The weapons deal reportedly worth some $2.2 billion is expected to be given final approval by Congress in the next few weeks. It follows three other major arms sales since 2017 to Taiwan conducted by the Trump administration.

Beijing slammed the latest military transaction as a “violation of international law and the One China policy” – the latter referring to the long-established US consensus with China that Taiwan island is under Beijing’s sovereignty.

Since the Chinese communist revolution in 1949 Taiwan has always been viewed as a renegade province by Beijing, having sheltered retreating anti-communist nationalist forces. Previous US administrations have sold weapons to Taiwan since 1979 when Washington and Beijing normalized diplomatic relations.

However, the Trump administration appears to be blatantly exploiting secessionist tensions between Taiwan and mainland China. By massively arming the island, there is a danger that Taiwanese separatists will feel emboldened to declare independence, a move which Beijing has always said would trigger it to deploy military force in order to assert its sovereignty.

China’s Global Times reported this week: “The latest US approval of arms sales to the island of Taiwan will hurt delicate China-US relations at a sensitive time when China and the US are to resume trade talks, and Taiwan secessionists should know that they are only being used as a card by the US… China and the US are stuck in a trade war and the US is playing all kinds of cards to create trouble and pressure China. Taiwan is one of them and nothing more.”

The dynamics over Taiwan have resonance with how the Trump administration has used sanctions to hamper commercial market access for Chinese tech giant Huawei, allegedly on the grounds of protecting US “national security”. There is also the suspicion that Washington and its Western allies have exploited political unrest in Hong Kong as another means to undermine Beijing’s sovereignty and meddle in China’s internal affairs. Trump’s dealings with Taiwan thus seem to be part of a broader tactic to antagonize and pressure China.

The timing of the latest arms sale comes only two weeks after Trump and Chinese President Xi Jinping appeared to strike an amicable agreement at the G20 summit to resolve the long-running trade war between the world’s two biggest economies. Over the past year, Trump has been piling tariffs on Chinese exports in a bid to extract concessions from Beijing favoring American interests. China has responded with its own sanctions on US trade and appears unwilling to unilaterally accommodate Trump’s economic demands.

Selling weapons to Taiwan and inflaming nationalist tensions on the island would serve Trump’s negotiating agenda for making “America First” in his trade dispute with Beijing.

A look at the weapons being sold to Taiwan begs questions. The mainstay of the recent sale is an inventory for over 100 Abrams tanks. As Chinese military experts point out, these 60-ton vehicles are unsuited to Taiwan’s dense river network and weak roads. The strategic military value is therefore questionable. But the political value is immense, if the real purpose is to antagonize Beijing.

Moreover, the latest proposed purchase is unlikely to be the last. Earlier this year, the Taiwanese authorities requested to buy 66 F-16 fighter jets from the US. That deal was put on hold by the Trump administration seemingly to mitigate tensions with China over the ongoing trade war. If Trump doesn’t get the far-reaching economic concessions he is seeking from China, one can expect the sale of F-16 squadrons to be green lighted in another act of exerting leverage on Beijing.

The grave trouble is that Trump is recklessly provoking China by using Taiwan as a pawn. Already US warships have increased patrolling through the Strait of Taiwan, the narrow strip of sea separating it from the mainland. The Pentagon cynically calls these maneuvers “freedom of navigation” exercises.

By arming Taiwan with audacious weapons inventories, the danger is that secessionist politicians on the island will adopt a more belligerent position towards Beijing, feeling that they have Washington’s backing if a conflict were to break out.

Thus the Trump administration is shamelessly using Taiwan as a form of blackmail against China. The fiendish American logic is: “do as we say on trade policies or else expect more trouble in your own backyard.”

But in this pursuit, Trump is risking war with China from his egotistical desire to be the winner on trade. It’s a reprehensible reckless tactic that this president is using elsewhere with regard to Iran, Russia, Venezuela and anyone else whom Trump wants to roll over. It’s hardly smart business acumen. It’s simply criminal use of state terrorism as a negotiating technique.