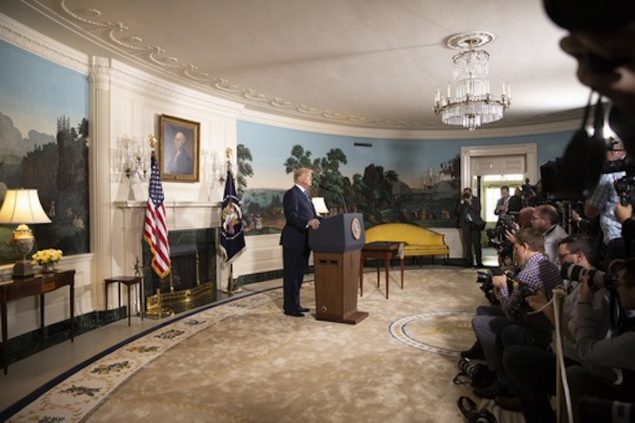 With the increasingly fragile situation between the U.S. and Iran, a military conflict of some kind is becoming more and more likely, according to Patrick Cockburn.

President Trump’s last-minute change of mind over launching US airstrikes against Iran shows that a military conflict of some description in the Gulf is becoming highly probable. His hesitation was most likely less connected with an Iranian surface-to-air missile shooting down a US surveillance drone than with his instinct that militarising the crisis is not in America’s best interests.

If Trump had not pulled back and the strikes against Iranian radars and missile batteries had gone ahead, where exactly would that have got him? This sort of limited military operation is usually more effective as a threat than in actuality. The US is not going to launch an all-out war against Iran in pursuit of a decisive victory and anything less creates more problems than it resolves.

Iran would certainly retain post-strike the ability to launch pin-prick attacks up and down the Gulf and, especially, in and around the 35-mile wide Strait of Hormuz through which passes 30 per cent of the world’s oil trade. Anything affecting this choke point reverberates around the word: news of the shooting down of the drone immediately sent the price of benchmark Brent crude oil rocketing upwards by 4.75 per cent.

Note that the Iranian surface-to-air missile shot down a $130m (£100m) drone, in practice an unmanned aircraft stuffed with electronic equipment that was designed to be invulnerable to such an attack. The inference is that if US aircraft – as opposed to missiles – start operating over or close to Iranian airspace then they are likely to suffer losses.

But the dilemma for Trump is at a deeper level. His sanctions against Iran, reimposed after he withdrew the US from the Iran nuclear deal in 2018, are devastating the Iranian economy. The US Treasury is a more lethal international power than the Pentagon. The EU and other countries have stuck with the deal, but they have in practice come to tolerate the economic blockade of Iran.

Iran was left with no choice but to escalate the conflict. It wants to make sure that the US, the European and Asian powers, and US regional allies Saudi Arabia and United Arab Emirates, feel some pain. Tehran never expected much from the EU states, which are still signed up to the 2015 nuclear deal, and has found its low expectations are being fulfilled.

A fundamental misunderstanding of the US-Iran confrontation is shared by many commentators. It may seem self-evident that the US has an interest in using its vast military superiority over Iran to get what it wants. But after the failure of the US ground forces to win in Iraq and Afghanistan, not to mention Somalia, no US leader can start a land war in the Middle East without endangering their political survival at home.

Trump took this lesson to heart long before he became president. He is a genuine isolationist in the American tradition. The Democrats and much of the US media have portrayed Trump as a warmonger, though he has yet to start a war. His national security adviser John Bolton and secretary of state Mike Pompeo issue bloodcurdling threats against Iran, but Trump evidently views such bellicose rhetoric as simply one more way of ramping up the pressure on Iran.

But if a ground war is ruled out, then Iran is engaged in the sort of limited conflict in which it has long experience. A senior Iraqi official once said to me that the Iranians “have a PhD” in this type of part political, part military warfare. They are tactics that have worked well for Tehran in Lebanon, Iraq and Syria over the past 40 years. The Iranians have many pressure points against the US, and above all against its Saudi and Emirati allies in the Gulf.

The Iranians could overplay their hand: Trump is an isolationist, but he is also a populist national leader who claims in his first campaign rallies for the next presidential election to “have made America great again”. Such boasts make it difficult to not retaliate against Iran, a country he has demonised as the source of all the troubles in the Middle East.

One US military option looks superficially attractive but conceals many pitfalls. This is to try to carry out operations along the lines of the limited military conflict between the US and Iran called the “tanker war”. This was part of the Iran-Iraq war in the 1980s and the US came out the winner.

Saddam Hussein sought to throttle Iran’s oil exports and Iran tried to do the same to Iraq. The US and its allies weighed in openly on Saddam Hussein’s side – an episode swiftly forgotten by them after the Iraqi leader invaded Kuwait in 1990. From 1987 on, re-registered Kuwaiti tankers were being escorted through the Gulf by US warships. There were US airstrikes against Iranian ships and shore facilities, culminating in the accidental but very avoidable shooting down of an Iranian civil airliner with 290 passengers on board by the USS Vincennes in 1988. Iran was forced to sue for peace in its war with Iraq.

Some retired American generals speak about staging a repeat of the tanker war today but circumstances have changed. Iran’s main opponent in 1988 was Saddam Hussein’s Iraq and Iran was well on its way to losing the war, in which there was only one front.

Today Saddam is gone and Iraq is ruled by a Shia-dominated government. Baghdad is trying to stay neutral in the US-Iran crisis, but no Iraqi leader can afford to oppose Iran as the greatest Shia power. The political geography of this part of the Middle East has been transformed since the Iran-Iraq war, with change very much to the advantage of Iran. From the Afghan border to the Mediterranean – in Iran, Iraq, Syria, Lebanon – Shia communities are in control or are the most powerful forces in the state. The US and UK often refer to them as “Iranian proxies” but in practice Iran leads a sectarian coalition with a religious basis.

It is a coalition which has already won its main battles – with Shia parties in Iraq, Bashar al-Assad in Syria, Hezbollah in Lebanon – and this outcome is not going to change. The Houthis in Yemen, who belong to a different Shia variant, have survived a prolonged attempt by Saudi Arabia and UAE to defeat them.

Compared with 28 years ago in the Gulf when the US was last fighting a limited war with Iran, the US is in a weaker position. Israel, Saudi Arabia and UAE may have urged Trump to tear up the nuclear deal and confront Iran, but they show no enthusiasm to join any war that ensues. Supposing that this month’s pin-prick attacks on tankers were indeed carried out by Iran, which seems likely, then the purpose will have been to send message that, if Iran’s oil exports can be cut off, so too can those of the other Gulf producers. Trump thinks he can avoid the quagmire of another Middle East war, but he may already be in too deep.