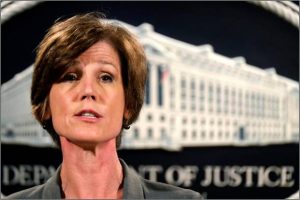 Accusing her of betrayal and insubordination, President Donald Trump on Monday fired Sally Yates, the acting attorney general of the United States and a Democratic appointee, after she publicly questioned the constitutionality of his controversial refugee and immigration ban and refused to defend it in court.

The firing came hours after Yates directed Justice Department attorneys not to defend the executive order, saying she was not convinced it was lawful or consistent with the agency’s obligation “to stand for what is right”…