Venezuela: Abrams beats the drums of war in Ottawa 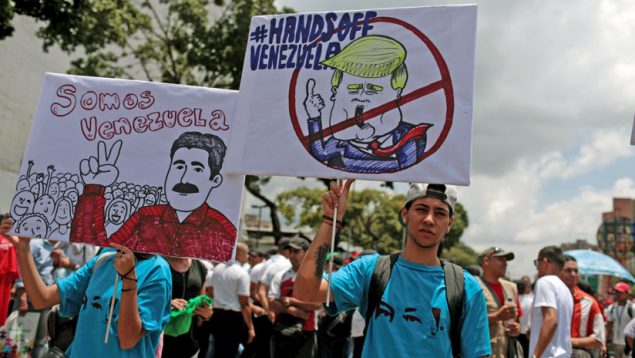 It’s clear that the US has not given up on its regime change attempts in Venezuela. When answering a reporter’s question about whether a maritime blockade or a quarantine was possible in view of China and Iran’s involvement in the country, US President Donald Trump has said that he is considering a blockade or quarantine of the country. At the same time, Elliott Abrams was in Canada working on a strategy to prompt the EU to sanction Venezuelan President Nicolas Maduro’s “regime.”

On August 1st, US President Donald Trump said that he is considering a blockade or quarantine of Venezuela.

He admitted it answering a reporter question, asking whether a maritime blockade or a quarantine was possible in view of China and Iran’s involvement in the country.

The US has clearly not given up on its regime change attempts in Venezuela.

On August 1st, US special representative for Venezuela Elliott Abrams said that the US and Canada were working on a strategy to prompt the EU to sanction Venezuelan President Nicolas Maduro’s “regime.”

“We both agreed that it would be really helpful if the EU would follow Canada and the U.S. in imposing sanctions on the Maduro regime,” said Elliott Abrams in an interview on CBC News Network’s Power & Politics.

“Europe is a kind of playground for people from the regime and their families — where their money is, they have houses there, they live the high life there — which is really disgraceful. So we strategized a bit about how, with the help of the Latin American democracies, to move the EU in that direction,” Abrams said.

“It would be really helpful if the EU would follow Canada and the U.S. in imposing sanctions on the Maduro regime,” said U.S. Venezuela envoy Elliott Abrams. “We strategized a bit about how, with the help of the Latin American democracies, to move the EU in that direction.” pic.twitter.com/W2Tl5Sm9vL

When Canada’s Global Affairs was asked for comment, it didn’t specifically answer the question.

“Canadian government officials discussed how Canada and the U.S. can work with the broader international community to return democracy to the people of Venezuela,” said Barbara Harvey, a spokesperson for Global Affairs.

“For some time, the Lima Group has been engaging its partners around the world in support of sanctions and other measures to pressure the Maduro regime,” said Harvey.

Canada and the US further appear to have differing views on Cuba – according to Canadian Foreign Minister Chrystia Freeland, Cuba could play a significant role in a peaceful transition in Venezuela.

Abrams said he was skeptical. “We wish you luck,” said Abrams, when asked what he thought of Freeland’s position. “We’re very pessimistic about it. The Cubans seem to be the dead-enders on Venezuela.”

“To show you how deep in they are, Maduro’s body guards aren’t Venezuelan. They’re Cuban. So, they’re very important to holding this regime together and we really think that if they weren’t there it would start to fall apart,” said Abrams.

“The Cuban and Venezuelan governments have a really deep strategic connection where both regimes, since neither of them are elected, seem to depend on each other for regime survival,” he said.

Abrams said that a military intervention was always on the table, but that didn’t represent US policy on Venezuela.

“Our policy is to put diplomatic, political, economic and international pressure on the regime. We are still doing that. We announced sanctions a few days ago. There will be more in the coming days. So, that’s the policy. But you know, the option – the president can’t say there is no option on the table, there is,” said Abrams.

Regardless, coming back to Trump’s claim that he’s considering a blockade on Venezuela. The realization of such a blockade is an act of war.

Another Trump administration official, who kept silent throughout the Venezuelan crisis is now taking part in efforts against Maduro.

US Commerce Secretary Wilbur Ross said that the US was ready to support pro-market reforms and privatizations in Venezuela with investment and credit to reverse socialism and rebuild a ruined economy.

Of course, the people don’t need to suffer, but only if they’re “ruled” by the US-Proclaimed Interim President Juan Guaido and the US-backed opposition.

In his speech in Brazil, Ross outlined how much the US considered Venezuela as its back yard and as a sort of “pet project.”

“Nothing works properly, not the electricity, not water, not sewage, not telephones, not the bus system, not healthcare, not distribution of food and medicine, and certainly not liquidity,”

“Over 4 million people have fled, including many young professionals,” Ross said.

“The opportunities are huge. We are looking at rebuilding a country from scratch,” he said.

On the Venezuelan side, President Nicolas Maduro rejected the US’ smear campaign against Venezuelan officials.

“I repudiate the fallacious and manipulative the attacks that have been made against the minister and I ask the support of the Venezuelan people.”

This was in relation to a recent accusation by the US Immigrations and Customs Enforcement – On their official account they stated that Venezuela Industry Minister Tareck El Aissami is ‘Wanted’ for drug smuggling and links to Hezbollah.

On August 1st, Venezuela reported another violation of its airspace by a U.S. Navy EP-3E Aries II electronic spy plane, which entered the Maiquetia airspace area, near Caracas.

On July 28, due to repeated attacks on its sovereignty, the Venezuelan government announced that it would file a complaint at the United Nations regarding the repeated violations of its airspace by the United States.

“As we have denounced, the Trump Administration confesses and boldly accepts that it effectively violates Venezuela’s air control space. Very serious and criminal confession. There is no doubt of its perverse intentions. We will raise the issue at the UN,” Foreign Minister Jorge Arreaza had tweeted.

“Russia cautions against any comments or external influences that try to sidetrack the course and objectives of the talks between the legitimate Venezuelan government and opposition members,” she said.

The US-backed opposition in the country has been running around in circles and appears to be completely out of gas, but a military blockade and an intervention would surely create quite a momentum.