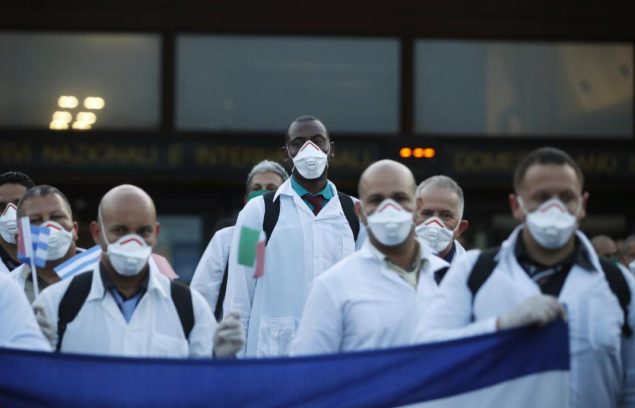 Medics and paramedics from Cuba pose upon arrival at the Malpensa airport of Milan, Italy on March 22, 2020. ANTONIO CALANNI / AP

While the spirit of international togetherness has been amply demonstrated by Cuba, Canada rebuffs Cuban doctors, ignores the UN and imposes sanctions on some of the world’s poorest nations.

These days, any national leader not actively urging their citizens to drink disinfectant is managing to look (relatively) good on the world stage.

Certainly, compared to the neurotic leadership south of the border, Justin Trudeau has emerged as a steady hand on the tiller, quickly providing Canadians with a wide economic safety net and behaving like an adult in the crisis.

So it’s all the more disappointing that, out of the limelight, he’s doing a great deal to make the situation worse during this pandemic for some of the most vulnerable people on the planet.

I’m referring to the prime minister’s decision to ignore a plea last month from United Nations Secretary-General Antonio Guterres — and the Pope — for nations to lift sanctions against other nations in order to help some of the weakest and poorest countries cope with the coronavirus crisis.

That sounds like a reasonable request, under the circumstances.

Indeed, even if we don’t care about the world’s vulnerable people, helping them deal with the crisis is in our interests too. As the UN leader noted: “Let us remember that we are only as strong as the weakest health system in our interconnected world.”

Yet Canada, ignoring the plea from the UN’s highest official, continues in the midst of the pandemic to impose sanctions on 20 nations, including Lebanon, Venezuela, Syria, Iran, Libya, Somalia, Nicaragua and Yemen.

While Canada’s sanctions are typically aimed at punishing the regimes running these countries, the impact of the sanctions falls primarily on ordinary citizens, according to Atif Kubursi, professor emeritus of economics at McMaster University.

Kubursi, who also served as a UN under-secretary-general and has extensive UN experience in the Middle East and Asia, says the impact of Canada’s sanctions on the people in these countries is devastating.

While the sanctions often appear to be directed exclusively at military items, they frequently end up being applied to virtually all goods — including spare parts needed to operate machinery in hospitals and pharmaceutical companies, notes Kubursi, who signed a letter from prominent Canadians to Trudeau requesting the lifting of sanctions.

For instance, if a Syrian businessman wants to buy Canadian products, he has to open an account for the transaction. But Kubursi says the Canadian government instructs Canadian banks not to allow such accounts for the purposes of trade with Syria — no matter how benign the Canadian product may be, or how urgently it might be needed in Syria.

For that matter, Ottawa’s sanctions prevent Canadians from using our banks or financial services to transfer money to Syria — for instance, to family members living in Syria.

The impact of sanctions, while always painful, is particularly deadly during the pandemic, when even advanced nations have struggled to obtain life-saving equipment.

While Canada’s sanctions mostly date back to the Harper era or earlier, the Trudeau government has generally maintained them and even added new ones against Venezuela.

Ottawa’s sanctions appear primarily aimed at appeasing the U.S., which ruthlessly enforces sanctions against regimes it wishes to destabilize or overthrow. Washington also punishes countries and companies that don’t co-operate with its sanctions.

Ottawa’s willingness to fall in line behind Washington is reflected in the fact it doesn’t impose sanctions against U.S allies Saudi Arabia or Israel, despite Saudi Arabia’s brutal murder of dissident Jamal Khashoggi and Israel’s illegal occupation of the West Bank. Even Israel’s announcement that it plans to annex the West Bank in July has produced no sanctions or criticism from Canada.

Trudeau’s decision to continue sanctioning 20 nations seems quite out of sync with the spirit of the times, when it’s hard to find a TV commercial that doesn’t proclaim the sentiment that “we’re all in this together.”

That spirit of international togetherness has been amply demonstrated by Cuba, which sent Cuban doctors to Italy to help its overwhelmed health care system and has offered similar medical help to First Nations in Canada.

When 36 Cuban doctors arrived in Milan last month, a grateful Italy thanked them and Italians at the airport cheered.

Meanwhile, Canada, in the spirit of the international togetherness, rebuffs Cuban doctors, ignores the UN and imposes sanctions on some of the world’s poorest nations.

Linda McQuaig is a Canada-based journalist and author. Her most recent book is The Sport & Prey of Capitalists.