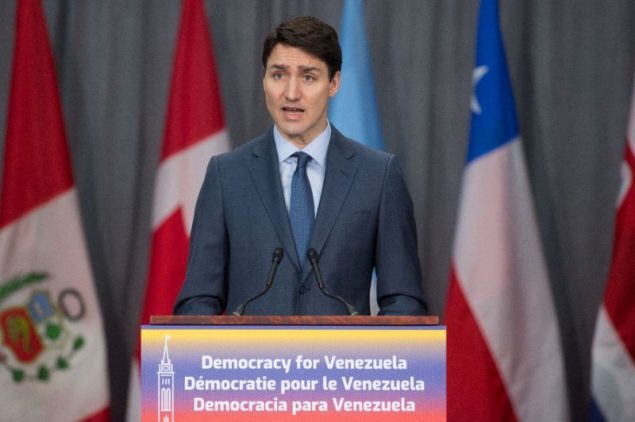 Trudeau has been working flat out, ramping up pressure on Venezuela; demanding the support of various countries and members of the Lima group for increasing punitive sanctions, all in the hope of overthrowing Maduro and the democratically elected government.

The effort Justin Trudeau is putting into overthrowing Venezuela’s government is remarkable.

During the past 12 days the prime minister has raised the issue separately with the leaders of the EU, Spain, Japan and Cuba.On Tuesday Trudeau had a phone conversation with European Council President Donald Tusk focused almost entirely on Venezuela, according to the communiqué.“Prime Minister Trudeau reiterated his support for Interim President Juan Guaidó”, it noted.

The next day Trudeau talked to Spanish Prime Minister Pedro Sánchez about ousting president Nicolás Maduro. Venezuela is the only subject mentioned in the official release about the call.

Venezuela was also on the agenda during Japanese Prime Minister Shinzo Abe’s visit to Ottawa on April 28. The post meeting release noted, “during the visit, Prime Minister Abe announced Japan’s endorsement of the Ottawa Declaration on Venezuela.” Produced at an early February meeting of the “Lima Group” of governments opposed to Maduro, the “Ottawa Declaration” called on Venezuela’s armed forces “to demonstrate their loyalty to the interim president” and remove the elected president.

On May 3 Trudeau called Cuban president Miguel Díaz-Canel to pressure him to join Ottawa’s effort to oust Maduro. The release noted, “the Prime Minister, on behalf of the Lima Group, underscored the desire to see free and fair elections and the constitution upheld in Venezuela.”

Four days later foreign affairs minister Chrystia Freeland added to the diplomatic pressure on Havana. She told reporters, “Cuba needs to not be part of the problem in Venezuela, but become part of the solution.”

Freeland was highly active after Guaidó, Leopoldo Lopez and others sought to stoke a military uprising in Caracas on April 30. Hours into the early morning effort Freeland tweeted, “watching events today in Venezuela very closely. The safety and security of Juan Guaido and Leopoldo López must be guaranteed. Venezuelans who peacefully support Interim President Guaido must do so without fear of intimidation or violence.” She followed that up with a statement to the press noting, “Venezuelans are in the streets today demonstrating their desire for a return to democracy even in the face of a violent crackdown. Canada commends their courage and we call on the Maduro regime to step aside now.” Then Freeland put out a video calling on Venezuelans to rise up and requested an emergency video conference meeting of the Lima Group. Later that evening the coalition issued a statement labeling the attempted putsch an effort “to restore democracy” and demanded the military “cease being instruments of the illegitimate regime for the oppression of the Venezuelan people.”

Three days later Freeland attended an emergency meeting of the Lima Group in Peru. The coalition released a communique after that get together accusing Maduro’s government of protecting “terrorist groups” in Colombia.

At another Lima Group meeting in Chile on April 15 Freeland announced the fourth round of Canadian sanctions against Venezuelan officials. Forty-three individuals were added to the list of 70 leaders Canada had already sanctioned. CBC reported that the latest round of (illegal) sanctions were designed to “punish Venezuelan judges who rubber-stamped Maduro’s moves” and “lower-ranking police officials who took prominent roles in suppressing the attempt by Venezuela’s opposition to bring humanitarian aid into the country on February 23.”

The Venezuelan government responded to Canadian sanctions by denouncing Ottawa’s “alliance with war criminals that have declared their intention to destroy the Venezuelan economy to inflict suffering on the people and loot the country’s riches.” A recent Center for Economic and Policy Research report gives credence to this perspective. Written by Jeffrey Sachs and Mark Weisbrot, “EconomicSanctions as Collective Punishment: The Case of Venezuela” concluded that 40,000 Venezuelans may have died over the past two years as a result of US sanctions.

The Liberals want us to believe their campaign to oust Venezuela’s government is motivated by support for democracy and human rights. Yet in recent weeks the Trudeau government has deepened ties to repressive Middle East monarchies, gutted its promise to rein in international abuses by Canadian mining companies’ and justified Israeli violence against those living in the open-air prison known as the Gaza Strip.

Last month members of Mouvement Québécois pour la Paix interrupted a speechby Freeland at the University of Montréal to criticize Canada’s policy towards Venezuela. Activists should be disrupting Freeland and other Liberal MPs public events across the country to demand an end to their effort to overthrow the government of Venezuela.