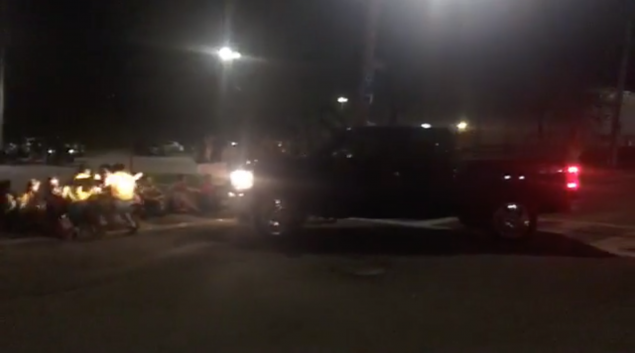 A pickup truck drives into a row of Jewish protesters sitting at the entrance to a parking lot outside an Immigration and Customs Enforcement detention facility in Central Falls, Rhode Island on August 14, 2019. (Screenshot from Facebook)

An ICE guard drove his pickup into a group Jewish protesters from Never Again Action who were sitting in a row to block a street. The ICE guards then used pepper spray on the protesters.

A pickup truck drove into a row of Jewish protesters demonstrating at the street entrance to an ICE detention center in Rhode Island on Wednesday night. It appears no one was seriously injured.

Protesters were then pepper-sprayed, according to people present at the protest.

Hundreds of Jewish protesters had gathered at the Donald W. Wyatt Detention Facility, an Immigration and Customs Enforcement center in Central Falls, and dozens blocked the entrance to the center’s parking lot. The protest was the latest demonstration by Never Again Action, a new Jewish group protesting ICE and United States immigration policy by getting arrested at ICE detention facilities.

At around 9:45 p.m., according to video, an eyewitness and social media posts from the protest, a black pickup truck driving 10 to 15 miles per hour drove into a group of about 30 people who were sitting in a row and blocking the street that fed into the detention center’s parking lot.

Video of the incident shows people screaming and running as the car moves slowly into the crowd. The crowd then broke out into a chant of “The whole world is watching.” Protesters surrounded the truck.

“The truck came in and people ran,” Lex Rofeberg, a protester who was not in the car’s path, told the Jewish Telegraphic Agency. “I don’t think someone got directly hit by the car.”

A person taking video of the event said “Everybody is OK, thank you for asking. I don’t think anyone’s hurt,” though the person later added that someone may have been hurt.

Never Again Action tweeted that the car belonged to a guard at the detention center.

“Oh my god,” the group tweeted. “An ICE Detention Center guard just drove their truck straight through a line of us sitting peacefully to block the parking lot. There don’t appear to be major injuries, still assessing the situation, police are moving in *on us* now.”

Oh my god. An ICE Detention Center guard just drove their truck straight through a line of us sitting peacefully to block the parking lot. There don’t appear to be major injuries, still assessing the situation, police are moving in *on us* now 😢

Minutes later, guards at the detention center pepper-sprayed the protesters.

“All of us who were in the vicinity caught some of the tear gas,” Rofeberg said.

“It was shocking, it was unexpected,” he added. “There’s some amount of risk when you go to an action like this. You don’t expect it to unfold like this.”