Troubling gaps in the new report of the MH-17 crash

The new accusation of Russian complicity in 2014 Malaysia Airlines shootdown was based on Ukrainian intelligence intercepts that were selectively interpreted while contrary information was ignored, writes Robert Parry.

The key conclusion of the Dutch-led criminal inquiry implicating Russia in the 2014 shootdown of Malaysia Airlines Flight 17 relied heavily on cryptic telephone intercepts that were supplied by the Ukrainian intelligence service and were given incriminating meaning not clearly supported by the words.

The investigators also seemed to ignore other intercepts that conflicted with their conclusions, including one conversation that appeared to be referring to a Ukrainian convoy, not one commanded by ethnic Russian rebels, that was closing in on the Luhansk airport, placing Ukrainian troops deep inside rebel territory.

That conversation was among five that the Joint Investigation Team (JIT) released in seeking the public’s help in identifying persons of interest in the MH-17 shootdown. The callers seemed to discussing information from Moscow regarding the movement of a convoy, but they describe it as a “Ukrops” or Ukrainian troop convoy.

“B: I am saying about the confirmation of the convoy that is going in the direction of the airport… Moscow/Moskva has confirmed… they see it. Is it err… whatsit… Ukrops convoy?

“A: The convoy that is going in the direction of the airport? Yes.

“B: And how did it go through?

“A: Most likely through Sabovka,” which the JIT interprets to be the town of Sabivka, about five miles west of Luhansk and about 92 miles northeast of Donetsk, the two rebel capitals. The Luhansk airport is about 20 miles south of the city center.

In other words, if this intercept from JIT is correct, the Ukrainian military was operating near the highway routes that the alleged Russian Buk missile battery would have been using. The conversation then picks up, referring to a possible battle for the airport:

“B: It’s somehow going from west. From west. Fucking one and a half kilometres from the airdrome.

“C: From the airdrome?

“C: It can’t be one and a half kilometres from the airdrome because there is a populated locality there, there are positions there. Probably… I don’t know. Will now try to do something. … I think we will be receiving information soon… our groups have left.

“C: Ok. Well, if they come in the airport, will fight at the airport. What else can we do?

Although it’s difficult to know precisely what these callers are discussing, the conversation seems to refer to a potential battle for an airport, not the deployment of a Buk missile system.

Also, if Ukrainian forces had penetrated that deep into rebel territory, it is difficult to exclude that a Ukrainian Buk battery might have traveled along the southerly route H-21, which skirts Donetsk and then heads east toward the JIT’s claimed firing site in a field near the town of Pervomaiskyi. H-21 then bends north toward Luhansk airport and the city of Luhansk. 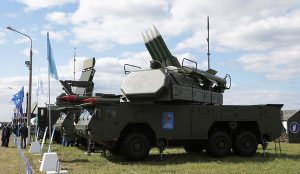 Photo of part of Russian BUK missile system at arms show in Moscow several years ago; the unit consists of missile launcher and a distinct radar targeting unit

The JIT video report on the MH-17 case, which was released on Wednesday, also didn’t address questions about the location of several Ukrainian Buk missile batteries that Dutch (i.e. NATO) intelligence placed in eastern Ukraine on July 17, 2014, the day that MH-17 was shot down. A finding from the Dutch intelligence service, MIVD, released last October, said the only high-powered anti-aircraft missile systems in eastern Ukraine at that time, capable of bringing down MH-17 at 33,000 feet and killing all 298 people on board, belonged to the Ukrainian military, not the rebels.

Although the location of the Ukrainian Buk systems would seem to be crucial to the investigation — at least in eliminating other suspects — JIT operates under an agreement with the Ukrainian government that lets it veto the release of information. Ukraine’s SBU intelligence service, which represented the Kiev government in the JIT, also has among its official responsibilities the protection of secret information that could be damaging to Ukraine.

Regarding JIT’s claim that the Buk missile system crossed over from Russian territory, the video report states: “All telecom data and intercepted telephone calls that have been examined by the investigation team demonstrates that the Buk/TELAR (the self-contained operating system) was brought into Ukraine from the Russian Federation.”

But as evidence the JIT cites one phone intercept, which – according to the JIT’s translation – does not use the word Buk though referencing a piece of equipment that can move on its own or be transported by truck. That could be a Buk system but could apply to many other weapons systems as well.

In the intercepted call, one speaker said, “it crossed, crossed the line.” The narrator of the JIT video report then adds, “The Buk/TELAR crossed the line, in other words, it passed the border.” But there are two assumptions here: that the unidentified weapon is a Buk and that the “line” means border. That could be the case but other interpretations are possible.

Another key point, the disputed location of the so-called “getaway” video of a Buk missile system missing one missile, is simply asserted as fact without an explanation as to how the JIT reached its conclusion placing the location near Luhansk.

While the Western mainstream media has given the JIT great credibility, the JIT itself has acknowledged a dependency on Ukraine’s SBU, which shaped the inquiry by supplying its selection of phone intercepts.

Yet, the SBU is far from a neutral party in the investigation, nor does it have clean hands regarding the Ukrainian civil war that followed a U.S.-backed putsch ousting elected President Viktor Yanukovych on Feb. 22, 2014, and sparking an uprising among ethnic Russian Ukrainians who represented Yanukovych’s political base in the east and south.

Since then, the SBU has been on the front lines of crushing the rebellion by using controversial tactics. In late June 2016, the United Nation’s Assistant Secretary-General for Human Rights Ivan Simonovic accused the SBU of frustrating U.N. investigations into its alleged role in torture and other war crimes.

Simonovic criticized the SBU for “not always providing access to all places where detainees may be kept. … OHCHR (the Office of the U.N. High Commissioner on Human Rights) also continues to receive accounts about torture and ill-treatment, arbitrary and incommunicado detention by the SBU, especially in the conflict zone.

“Torture and threats to members of the families, including sexual threats, are never justifiable, and perpetrators will be held to account sooner or later. … War crimes, crimes against humanity and grave breaches of human rights cannot be the subject of an amnesty.”

Yet, the SBU strongly influenced the direction of the JIT, which included Ukraine along with the Netherlands, Belgium, Australia and Malaysia. The JIT agreement gave Ukraine veto power over what would be released – even though Ukrainian military units were among the logical suspects in the MH-17 case,

Earlier this year, an internal report describing the JIT operation revealed how dependent the investigators had become on information provided by the SBU. According to the report, the SBU helped shape the MH-17 investigation by supplying a selection of phone intercepts and other material that would presumably not include sensitive secrets that would implicate the SBU’s political overseers in Ukraine. But the JIT seemed oblivious to this conflict of interest, saying:

“Since the first week of September 2014, investigating officers from The Netherlands and Australia have worked here [in Kiev]. They work in close cooperation here with the Security and Investigation Service of the Ukraine (SBU). Immediately after the crash, the SBU provided access to large numbers of tapped telephone conversations and other data. …

“At first rather formal, cooperation with the SBU became more and more flexible. ‘In particular because of the data analysis, we were able to prove our added value’, says [Dutch police official Gert] Van Doorn. ‘Since then, we notice in all kinds of ways that they deal with us in an open way. They share their questions with us and think along as much as they can.’”

The internal JIT report continued: “With the tapped telephone conversations from SBU, there are millions of printed lines with metadata, for example, about the cell tower used, the duration of the call and the corresponding telephone numbers. The investigating officers sort out this data and connect it to validate the reliability of the material. …

“By now, the investigators are certain about the reliability of the material. ‘After intensive investigation, the material seems to be very sound’, says Van Doorn, ‘that also contributed to the mutual trust.’”

Another concern about how the SBU could manipulate the JIT investigation is that the long assignments of investigators in Kiev over a period of more than two years could create compromising situations. Kiev has a reputation as a European hotbed for prostitution and sex tourism, and there’s the possibility of other human relationships developing between Australian and Dutch investigators and Ukrainian intelligence officers.

According to the JIT report, four investigating officers from Australia are stationed in Kiev on three-month rotations while Dutch police rotate in two teams of about five people each for a period of a “fortnight,” or two weeks.

The SBU’s assistance, however, did not lead to a rapid resolution of the MH-17 mystery, now more than two years old. The Dutch Safety Board report last October placed the spot of the suspected missile launch within a 320-square-kilometer area, including both government and rebel positions.

According to the Dutch intelligence service finding also released last October, the only anti-aircraft missiles in eastern Ukraine on July 17, 2014, capable of hitting a plane flying at 33,000 feet belonged to the Ukrainian military.

There’s also the dog-not-barking mystery of the curious silence from the U.S. intelligence community. Although Secretary of State John Kerry claimed to know the firing location immediately after the shootdown, the U.S. government went silent after CIA analysts had time to evaluate U.S. satellite, electronic and other intelligence data.

A source who was briefed by U.S. intelligence analysts told me that they saw the attack as a rogue Ukrainian operation involving a hard-line oligarch with the possible motive of shooting down Russian President Vladimir Putin’s official plane returning from South America that day, with similar markings as MH-17. But I have been unable to determine if that assessment represented a dissident or consensus view inside the U.S. intelligence community.

For its part, the Russian government has denied supplying the eastern Ukrainian rebels with a Buk system although the rebels did possess shorter-range, shoulder-fired MANPADs.

The journalism you read at Consortium News is made possible through donations from readers like yourself. Contributions go directly to support the production, editing, and dissemination of original journalism. Consortium News does not receive corporate/government sponsorships and does not sell advertisements. We have $16,582 to go to meet our late-summer/early-fall fundraising goal at $30,000. Please contribute what you can so we can continue producing important independent journalism.

When you donate to Consortium News, you are investing in ethical journalism. We hold a steadfast commitment to providing compensation to contributing writers for original works of journalism, as well as fact-checking and editing support. And our articles are frequently circulated to other independent news websites, bolstering the availability of strong, journalistically-sound content across the internet.