Trapped: Life on the Donetsk frontline through the eyes of a little girl 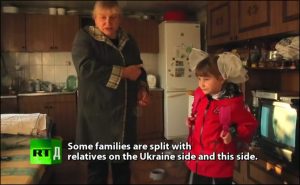 Zaitsevo village is caught between the opposing sides in the military conflict in the Donbass region of eastern Ukraine. As hostilities by the Armed Forces of Ukraine continue, locals sleep to the sound of gunfire and use their cellars and basements as bomb shelters. They say they have nowhere else to go, so they continue to live in this no man’s land where near-constant shelling risks their lives every day.

Among Zaitsevo’s residents is seven-year-old Masha. She lives with her family, four generations of women–her mother, grandmother and great-grandmother. They all grew up here and consider the village their home, a place where families are so deeply rooted that moving away to become refugees is unthinkable. Masha attends her first-grade classes every day, even though her school has twice been hit by artillery fire.

Watch this film in Russian