Torture and murder by Western-led military forces in the ‘liberation’ of Mosul, Iraq

Introduction by New Cold War.org:
ABC News (United States), the Toronto Star (Canada) and Der Spiegel (Germany) have each published dossiers in the past several days showing members of an Iraqi special forces unit torturing and executing civilians in Mosul during fighting against ISIS last year. The stories are based on video smuggled out of Iraq by Iraqi journalist Ali Arkady. 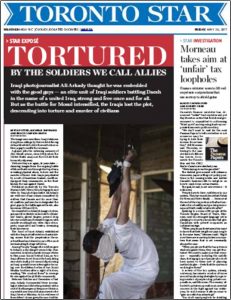 The Star reporting explains, “Embedded with Iraqi special forces last year, Ali Arkady hoped to chronicle the unit’s heroic fight against Daesh. But, after gaining the soldiers’ trust, he instead found himself a witness to torture, and worse…”

Below is a selection of the reporting by the three Western media outlets.

Can countries such as the United States, Canada and Germany claim ignorance of the torture practices of the armed forces of the Iraqi government when they have armed, financed, trained and sometimes fought beside those very forces? Can anyone believe the Western-allied Iraqi prime minister Haider al-Abadi who, in response to a report by Amnesty International in October 2016 documenting torture and other abusive practices by Iraqi armed forces, vowed to ‘investigate’?

ABC News explains in its reporting:

Iraqi special forces from the E.R.D. and the Golden Division were the subject of a 2015 ABC News investigation called Dirty Brigades: No Clean Hands in Iraq’s ISIS Fight, highlighting human rights abuses Iraqi troops posted on social media. In a briefing for Pentagon reporters in January [year?], however, when a senior American commander in Iraq praised the Iraqi unit, any concerns about their tactics appeared to be in the past. U.S. Army Col. Brett Sylvia, commander of Task Force Strike in Baghdad, told reporters that American officers had recently advised the E.R.D. and called them “a very effective fighting force.”

“This is the first time that we have advised them,” Sylvia said. “And it has been really a fruitful partnership in all regards.”

Is it any wonder that many Western media outlets are playing down or not reporting at all the revelations brought to light by the brave Iraqi journalist Ali Arkady?

Of note is that each of the three Western media outlets publishing Ali Arkady’s findings promote the overthrow of the elected president of Syria, Bashar Al-Assad. They support the economic and political sanctions against Russia along with the accelerated military buildup against Russia in eastern Europe, each of which followed the ‘Maidan’ coup in Ukraine in February 2014.

Elite unit was once praised by U.S. military officials

Iraqi photojournalist Ali Arkady was embedded with who he thought were the good guys — an elite unit of Iraqi soldiers battling Daesh in the name of a united Iraq, strong and free once and for all. But as the battle for Mosul intensified, the Iraqis lost the plot, descending into torture and murder of civilians.

The images are merciless: Iraqi detainees slung from ceilings by their wrists like rag dolls; a blindfold to hide the next torturous blow, a gag to muffle the screams. A glance jolts the sickening memory of Abu Ghraib prison, circa 2003, when the United States army and the CIA let their humanity slip away. Yet here they are again, 14 years later — damning images from the ongoing battle of Mosul that incinerate the fog of war, revealing physical abuse, torture and the murder of Sunni Arab Iraqis perpetrated by a unit of American-trained, coalition-equipped Iraqi commandos on the front lines in the war against Daesh.

Published exclusively by the Toronto Star and ABC News, the photographs and video of Iraqi photographer Ali Arkady are evidence of war crimes committed by soldiers that Canada and its more than 60 coalition partners have designated the good guys in the battle against Daesh, also known as ISIS and ISIL.

How an embedded photographer exposed torture at the hands of Iraqi ‘heroes’, by Mitch Potter, foreign affairs writer, Toronto Star, May 25, 2017