Tomorrow is another day 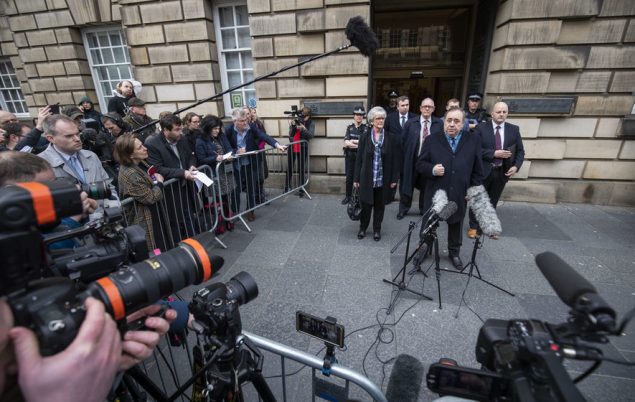 “I was worried that this was James Stewart of the Glen before a jury of Campbells all over again, but this jury looked carefully at the actual evidence before them…”

I have received very many messages waiting for my take on the Alex Salmond acquittal. There is much to say and a need to take serious decisions about exactly when to reveal various crucial elements of information, because while the truth is vital, there can be a legitimate question at which moment it does most good. The most stunning information is in danger of being swamped by COVID-19 at the moment.

Secondly, you will not perhaps be surprised to hear that there has been some serious happiness in the Murray household today. This subject is best tackled stone cold sober.

It is tonight worth reflecting that people seeking to still cast aspersions are attacking the jury, who were diligent and contained nine women whom they are disparaging. Nine women on a jury drawn from No voting Edinburgh. A jury who for the last few years have been, like everybody else, indoctrinated with the rubric that it is a terrible moral wrong to doubt the word of an accuser making any sexual allegation #Ibelieveher.

I was worried that this was James Stewart of the Glen before a jury of Campbells all over again, but this jury looked carefully at the actual evidence before them, evidence that was – and still is now post verdict – in no way reflected fairly in the highly selective coverage of the mainstream media. That jury came to the only decision available to honest and sensible people.

But I want to make one thing quite clear. This is not a case where the major accusations failed because of the difficulty of proving what happened with two people alone in a room. In such cases it is often right to feel real and profound sorrow for the accuser with no means of proof. This was a case where there was very real evidence, from third party after third party, of certain accusers telling definite and deliberate lies. A case where eye witnesses stated categorically that claimed events did not happen. A case where eye witnesses testified people were not physically present when claimed. A case where witnesses testified that reports had not been made, and policies not instituted, as claimed by the prosecution.

A limited amount of evidence was also heard of some of the accusers conspiring together with others, including through a Whatsapp group created for the specific purpose, to fabricate and forward those lies. The vast bulk of evidence on this specific issue of conspiracy was excluded by the court both in pre-trial hearings and by dismissal of witnesses or evidence in the trial itself but, as Alex Salmond indicated from the court steps, will be out in due time.

It is also important to note that two thirds of the accusers – and indeed precisely those two thirds who were involved in lies, fabrications and conspiracy – were and are senior members of the SNP, very much part of the party machine, very much close to the leadership and especially involved in the non-independence related agenda that has taken over the party. With one exception, they are in highly paid party nominated jobs now with the tab picked up by the taxpayer. What we learned in the trial about careerism and self-promotion among those earning a very fat living out of the party’s current domination of Scottish politics was really very unedifying indeed.

That a party which has such a wonderful and committed membership – a membership who make me proud to be a member alongside them – should play host to a parasitic and highly paid professional elite with no discernible interest in Independence is a truly remarkable phenomenon. What we saw revealed in court was a procession of members of the political class who would just have happily have made their careers in the old corrupt Scottish Labour Party if it was still in charge. A major, major clearout is needed.

Now where did I leave my Lagavulin? For once, I feel I have deserved it.

This article is entirely free to reproduce and publish, including in translation, and I very much hope people will do so actively. Truth shall set us free.