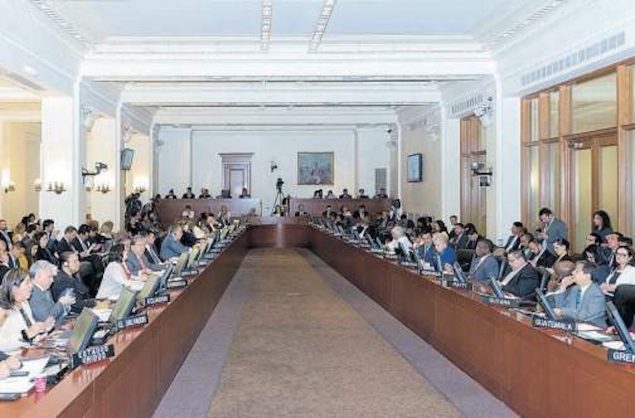 The OAS Permanent Council adopted a resolution condemning the lifting of the parliamentary immunity of deputies of Venezuela’s National Assembly during its meeting on September 11, 2019.

There have been many ignominious moments at the Permanent Council of the Organization of American States (OAS), and many farcical decisions made, but they pale in significance when compared with the events of Wednesday, September 11, 2019.

There have been many ignominious moments at the Permanent Council of the Organization of American States (OAS), and many farcical decisions made, but they pale in significance when compared with the events of Wednesday, September 11, 2019.
On that day, 11 countries, accompanied by the illegitimate representative of the self-proclaimed “interim president” of Venezuela, Juan Guaidó, adopted a resolution opening the possibility of invading the sovereign territory of Venezuela with the obvious intention of achieving their self-interested goal of toppling the Government of Nicolás Maduro.

The ridiculousness of the proceedings at the OAS Permanent Council is that 16 of its legitimate 33 member states had no vote in the resolution because they are not signatories of the Inter-American Treaty of Reciprocal Assistance (the Rio Treaty) under which the dangerous resolution was invoked and adopted.

By a previously absurd decision, in 1975, 21 then signatory countries of the Rio Treaty decided to make the OAS Permanent Council the body in which matters related to the treaty would be discussed. At that time, only two Caricom countries were signatories to the treaty, namely Haiti and Trinidad and Tobago. A third Caricom country, The Bahamas, did not join until 1982. No Caricom country has joined since. Canada, a big player in the OAS, is also not a signatory.

The actual number of signatory states is now 17, although farcically the register still shows the membership as 19, with Cuba and Venezuela as signatory states. Cuba withdrew from the OAS and, informally, from all hemispheric bodies in 1962, and Venezuela formally withdrew in 2013. It would have been interesting to see what the present signatory countries would have done had Cuba sent a representative to the meeting.

Another four of the original members of the Rio Treaty have also “denounced” it, withdrawing from membership. These countries are: Bolivia, Ecuador, Mexico, and Nicaragua.

In the event, 10 signatory states of the Rio Treaty and Juan Guaidó’s improperly seated OAS representative proposed a resolution arising from this anachronistic 1947 treaty for adoption at a meeting of the Permanent Council of the OAS. The objective of the resolution was clearly set out in an accompanying notice. It claimed, without any supporting evidence, that “a series of developments and situations, which are as a consequence of the Venezuelan crisis, pose a threat to peace in the Americas and… affect the inviolability or the integrity of the territory or the sovereignty or political independence of various American states”.
Spuriously it went on to say: “It is for that reason that measures need to be adopted by the member states of the [Rio Treaty] based on the principles of inter-American solidarity and cooperation established in said instrument.”

Venezuela was thereby set-up for “measures” that would be agreed by a two-thirds vote of the foreign ministers of the claimed 19 signatory countries at a meeting to be held “in the second half of September 2019” when they will be attending the UN General Assembly in New York. The measures include establishing a naval and aerial blockade of Venezuela or using military force.
If there was any doubt that the 10 governments plus Guaidó’s representative had anything but military force in mind that doubt disappeared when, by virtue of their simple majority of the claimed 19 signatories, they spurned an amendment from Costa Rica, which proposed that any measures would exclude “those that may involve the use of armed force”.
So, clearly armed force is very much in the collective minds of the 11 governments plus Guaidó’s representative that eventually pushed through the resolution.  These 11 countries are the original 10 proposers of the resolution — Argentina, Brazil, Colombia, El Salvador, Guatemala, Haiti, Honduras, Paraguay, Dominican Republic, and the United States of America — plus Chile that voted with them.

Alarmingly, and ludicrously, the resolution was adopted in the name of the Permanent Council of the OAS, even though 15 member states have no connection with the Rio Treaty and could not vote, and five of the signatory states (Costa Rica, Panama, Peru, Uruguay, and Trinidad and Tobago) did not support it. The Bahamas, which is a member state, was absent.
Sadly, governments of countries which have been the victims of invasion supported this resolution, which, in the words of the Mexican Ambassador Luz Elena Baños Rivas, “inextricably entails the possibility of the use of force…and is contrary to international law”.  Among these is the Government of Haiti, a Caricom member state.

At some point in the not too distant future Caricom itself will have to consider whether its member states have breached undertakings in its own treaty, and whether they should abandon any effort to achieve a common foreign policy. Failure to deal definitively with this situation would ruin Caricom’s greatest strength — its 14 votes pooled in unison.
The 1947 Rio Treaty emerged in the context of a world that had just emerged from World War II. It was a world in which Caricom countries, except for Haiti, were all colonies, as were the majority of countries of Asia, Africa, and the Pacific. The United States was the rising, but dominant, power of the Americas, and Canada was still a dominion of the British Crown. Cuba was in thrall to mafia outfits from the US, and Latin American countries were ruled by undemocratic juntas for the most part.

It is nothing short of shameful that a handful of countries would invoke a 72-year old, outdated treaty in today’s world to try to accomplish the crushing of a Government they dislike. Today, Venezuela; tomorrow who, and to serve whose interests?
Equally, it continues to be deeply disturbing that at the OAS a minority of states make and impose decisions that wreck the organisation’s institutional foundations and reduces it to a weapon for the interests of a few.
Peace and security is increasingly endangered in the hemisphere, as is the relevance of the OAS as set out in the obligations of its charter: “To achieve an order of peace and justice, to promote their solidarity, to strengthen their collaboration, and to defend their sovereignty, their territorial integrity, and their independence.”

Sir Ronald Sanders is Antigua and Barbuda’s ambassador to the US, Organization of American States, and high commissioner to Canada; an international affairs consultant; as well as senior fellow at Massey College, University of Toronto, and the Institute of Commonwealth Studies, University of London. He previously served as ambassador to the European Union and the World Trade Organization and as high commissioner to
the UK. The views expressed are his own. For responses and to view previous commentaries: www.sirronaldsanders.com