Time for Romania to face the truth over secret CIA prison

They called it “Bright Light,” the operational code name of a secret prison located in the Romanian capital Bucharest. Hidden in the basement of a government building used as the National Registry Office for Classified Information (ORNISS), the site was used by the CIA to hold and interrogate alleged “high-value” terrorist suspects. Romania assisted the CIA in secretly flying these suspects in and out of the country, probably drugged and chained spread-eagled to the floor of the aircraft. 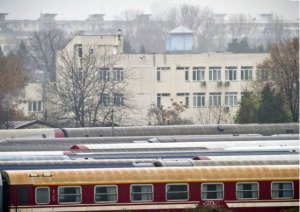 ‘National Registry Office in Bucharest Romania where CIA ran a torture prison, 2011 photo by The Independent

Evidence of the secret CIA prison in Romania has been mounting since 2005. Yet, Romania has consistently denied its existence. The Foreign Ministry declared last September, after being urged to come clean by the Council of Europe’s Commissioner for Human Rights, that it had “no information whatsoever showing that there existed secret CIA detention centers on its territory.”

A superficial Senate inquiry previously concluded years ago, in a report that seemed like an echo of the public lies of Romania’s authoritarian past, that CIA detention centers did not exist in Romania, no flights transported prisoners through Romania, and no Romanian institutions participated in the CIA program. A report for the Parliamentary Assembly of the Council of Europe by Swiss senator Dick Marty in 2007 dismissed that inquiry as “an exercise in denial and rebuttal, without impartial consideration of the evidence” whose conclusions “cannot be sustained.”

Now, a complaint before the European Court of Human Rights is pushing for the truth about Bright Light. The case was filed by the Open Society Justice Initiative, on behalf of Abd-al Rahim al-Nashiri, who was secretly detained in that prison sometime between June 2003 and September 2006. Al-Nashiri is currently facing capital charges before a U.S. military commission at Guantanamo Bay arising from his alleged role in the 2000 bombing of the USS Cole in Aden harbor and other attacks.

The complaint says that Romania assisted the CIA in landing a secret flight bearing al-Nashiri in Romania, and transferring him to a secret prison. During the first month of detention there, al-Nashiri and other prisoners were reportedly subjected to sleep deprivation, water dousing, slapping or forcible standing in painful positions. At some later point, Romania assisted the U.S. in secretly flying al-Nashiri out, despite the grave risk of his being subjected to further ill-treatment and torture, incommunicado detention, a flagrantly unfair trial, and the death penalty in U.S. custody.

After Romania assisted the CIA in transporting al-Nashiri from Romania, the CIA eventually transferred him in 2006 to Guantanamo. His U.S. lawyers have been unable to relay his communications in public because, under current U.S. government classification guidelines, everything he says is presumed to be classified as secret.

As a result of this extraordinary secrecy, there is only a single publicly available document, dating back to 2007, which provides a glimpse of al-Nashiri’s torture in his own words. A heavily censored transcript of a closed proceeding held in Guantanamo Bay reveals that he said: “From the time I was arrested five years ago, they have been torturing me. It happened during interviews. One time they tortured me one way and another time they tortured me in a different way”. Al-Nashiri’s own descriptions of the torture methods applied on him by the U.S. government are blacked out in the transcript. He does, however, state: “Before I was arrested I used to be able to run about ten kilometers. Now, I cannot walk for more than ten minutes. My nerves are swollen in my body.”

None of the accusations against Romania in this affair are new. Dick Marty’s 2007 report concluded the Romanian government was “knowingly complicit” in the CIA’s secret detention program and that senior Romanian officials “knew about, authorized, and stand accountable” for what happened on Romanian soil. What is new is that the European Court has the power to order Romania to respond to its inquiries—just as it recently ordered Poland to provide documentation and responses to a similar complaint filed over al-Nashiri’s torture and detention at another secret CIA prison there.

In Poland, the issue continues to gnaw at the political establishment, as occasional leaks from a faltering official investigation feed speculation over who approved what and when, and a public debate over the role of the U.S. in pressuring its new allies in east and central Europe to facilitate clandestine torture and illegal detention.

Now, as Romania battles through an intense political crisis, there have been plenty of calls from the international community for the country to adhere to the rule of law, and to ensure it protects the institutions of the country’s post-Communist democratic order. But democracies do not leave people to be tortured in secret basement prisons either—that was the stuff of Communism. For the sake of its future, it is time for Romania to face up to what happened in the prison codenamed Bright Light.