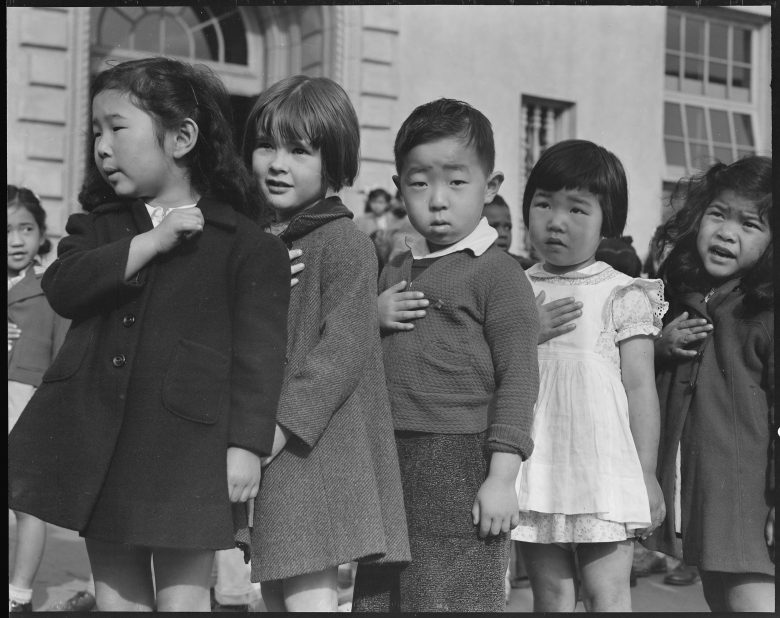 Photo by Dorothea Lange, courtesy of the National Archives and Records Administration.

This article explains it is not the first time attempts have been made in the USA to restrict the rights of citizenship along racial lines.

In the latest in a long string of attacks on immigration, this week Trump declared he would issue an executive order ending birthright citizenship. Established by the 14th amendment in order to grant citizenship to freed slaves, the idea that all people born in the United States are U.S. citizens, regardless of race or where their parents came from, has long been upheld by the courts and the Constitution. But this is not the first time white supremacists have tried to restrict the rights of citizenship along racial lines.

In a little known episode from World War II, nativist agitators who had led earlier efforts to exclude Asian immigrant communities — and paved the way for Japanese American incarceration — attempted to strip U.S.-born Nisei of citizenship, claiming their “racial characteristics” made them “unfit for American citizenship.” The legal fight that ensued is both a reminder that we’ve been here before and an example of our long history of resisting attacks on our right to call this place home.

The first major battle to protect birthright citizenship came from Chinese American citizen Wong Kim Ark in 1898. His parents, like all Asian immigrants at that time, were ineligible for citizenship — deemed “inassimilable” and therefore unqualified for naturalization — but Wong’s birth in San Francisco in 1873 made him a citizen of the United States. He remained in California after his parents returned to China, and twice traveled to visit them overseas. After the second trip, in 1894, the collector of customs claimed Wong was not a citizen and denied him reentry. Wong decided to fight back. He took his case all the way to the Supreme Court, where a 6-2 majority held that under the 14th amendment a child born in the United States is a citizen of the United States — regardless of whether their parents were U.S. citizens.

Wong Kim Ark’s legal battle established an important precedent for protecting the rights of non-white citizens targeted for exclusion. But a clear edict from both the Constitution and the Supreme Court did not stop the efforts of nativists and nationalists who fought to keep immigrant communities of color from attaining equal access to the rights of citizenship.

Following the Chinese Exclusion Act of 1882 and the subsequent increase in immigration from Japan, groups like the Native Sons and Daughters of the Golden West pushed a hostile campaign to keep “Asiatics” from entering the country and obtaining citizenship. Relying on racist Yellow Peril tropes warning of “hordes” of Asian immigrants “invading” the U.S., they steadily chipped away at the rights of Chinese, Japanese, and other Asian American communities during the early 20th century. A series of restrictive immigration laws culminating in the Immigration Act of 1924 created an “Asiatic Barred Zone” and banned entry from virtually all Asian countries, while alien land laws, anti-miscegenation laws, local ordinances prohibiting Japanese students from attending white schools, and other policies curtailed the everyday rights of Asian Americans. The combined message was clear: You are not welcome here.

This exclusionary movement laid the groundwork for the incarceration of Japanese Americans during World War II, stoking white fears of the immigrant other and siphoning away Japanese American political power. But it didn’t stop there.

With the backing of the American Legion, John T. Regan, longtime Grand Secretary of the Native Sons, sued Cameron King, registrar of voters in San Francisco County, to remove the names of 90 Nisei from the voting rolls for the August 1942 primaries and to bar them from voting for the duration of the war. On the surface, Regan v. King touched only on voting rights, but its real purpose, laid bare by the Grand Parlor resolution, was to overturn the 1898 Wong Kim Ark decision and revoke birthright citizenship.

The racist underpinnings of the case became even clearer when Regan went to court. Former California Attorney General U.S. Webb argued the case in Federal District Court in June 1942, where he explicitly told the judge it revolved around “the citizenship and right to citizenship of all peoples and all races who do not fall within the characterization or description of white people.” Webb’s argument rested unabashedly on white supremacist ideology, stating that the Declaration of Independence and the Constitution were made entirely “by and for white people.”

The judge rejected the Native Sons’ plea, citing Wong Kim Ark, but Webb then appealed the case to the Ninth Circuit Court of Appeals — drawing the attention of the Japanese American Citizens League.

The JACL had previously decided not to challenge the forced removal and incarceration, instead offering the federal government their cooperation. The decision was deeply unpopular with those who saw it as a failure of their responsibility to the community, and it earned them widespread resentment. But the JACL claimed their reluctant cooperation with a temporary injustice did not erase any permanent rights. Regan v. King was different: to lose the rights of citizenship would be a very permanent loss. Japanese Americans taking a class on the “Ideals of American Citizenship and the English language” inside Manzanar concentration camp, July 3, 1942. Encouraged to enroll by the administration, Issei were considered “aliens ineligible for citizenship” and could not actually apply for naturalization until 1952. Photo by Dorothea Lange, courtesy of the National Archives and Records Administration.

Despite some initial hesitation on the part of JACL leadership, National president Saburo Kido and past president Walter Tsukamoto agreed to prepare an amicus brief in opposition to the Native Sons’ appeal. But both Kido and Tsukamoto were by this time imprisoned in WRA camps where they had no access to the legal files and office facilities needed to organize a proper case. At the suggestion of A.L. Wirin of the Southern California ACLU (who had initially brought the Regan case to the JACL’s attention) they reached out to Hugh Macbeth, who then recruited the NAACP’s Southern California branch president Thomas L. Griffith.

The JACL filed the amicus on February 17, 1943, listing Kido, Tsukamoto, Macbeth, Griffith, and Wirin as counsel. The brief argued that the Native Sons’ lawsuit impacted not just the Nisei but all people of color in the United States, and threatened the rights of Native Americans, African Americans, and all Americans of Asian ancestry. Two days later — the same day the Court considered the appeals of Gordon Hirabayashi, Fred Korematsu, and Minoru Yasui — U.S. Webb presented the Native Sons’ appeal, contending that Wong Kim Ark had been “erroneously decided.” However, before Wirin could deliver the JACL’s position, the judges held an impromptu, whispered conference on the bench and sustained the lower court’s decision, declaring it “not necessary” to hear any further argument. Webb made a last desperate appeal to the Supreme Court, but a few months later the Court officially declined to hear the case, killing Regan for good.

Thanks to a strong coalition between the JACL, NAACP and ACLU, and the earlier fight of Wong Kim Ark, this attempt to strip Japanese Americans of citizenship during World War II ultimately failed. But, as evidenced by Trump’s latest executive order, white supremacists’ efforts to restrict the full and equal participation of immigrants and people of color in our democracy haven’t disappeared either. The targets of exclusion may have shifted over time, the language of justification become less transparent in its quest for a “white man’s country,” but what we are witnessing today is part of a much larger arc of history.

However, if we take one thing away from this history, let it be the knowledge that we have always fought back, that each and every time they tried to kill our spirit and deny us what is rightfully ours, they did not succeed. From the origins of the 14th amendment in Black Americans’ struggle to claim a place in a nation built on their stolen labor, to Asian American legal battles like Wong Kim Ark and Regan v. King, to the broad coalitions of immigrant activists leading this movement today, we will always stand up and fight back.

[Header photo: School children reciting the Pledge of Allegiance shortly before the military round-up of Japanese Americans on the West Coast, April 20, 1942. Original caption: “San Francisco, California. Many children of Japanese ancestry attended Raphael Weill public School, Geary and Buchanan Streets, prior to evacuation. This scene shows first- graders during flag pledge ceremony. Evacuees of Japanese ancestry will be housed in War Relocation Authority centers for the duration. Provision will be effected for the continuance of education.” Photo by Dorothea Lange, courtesy of the National Archives and Records Administration.]
Editors’ Note: While we don’t necessarily share the views we publish on New Cold War, we do attempt to provide readers with a range of views. This is because your right to make your own mind up depends on your being fully informed.
Share
Tweet
Share
Pin