Theresa May’s war on the internet

Last night, Theresa May was in France for a joint press conference with new French President Emmanuel Macron. As far as I could tell, it was only Al Jazeera that broadcast it live in Britain.

The only time the visit was mentioned during BBC Radio 4’s flagship news show, the Today program, was during the five-minute religious slot ‘Thought for the Day’. It was not covered in the news section at all. But this should be major, major news. This was Theresa May’s first policy announcement since last week’s election. And it wasn’t on Brexit, the reason she supposedly called the election. It wasn’t on austerity, which she apparently told her own MPs was over in a private session two days ago. No, her first major public policy announcement was – the end of internet freedom. 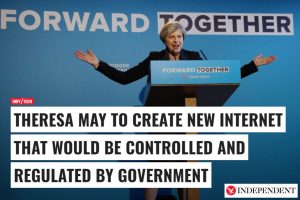 Specifically, what was announced was that both countries would be introducing heavy fines for internet companies that failed to remove what they, very loosely, defined as “extremist content.”

Now, taken at face value, this might seem to be referring to ISIS [Islamic State, formerly ISIL] recruitment videos or online suicide bombing training videos, or whatever. But the direct encouragement of violence is already illegal. So, what exactly is being proposed? Who exactly will be targeted?

It was former PM David Cameron who originally came up with the idea that “nonviolent extremism” should be criminalized alongside violent extremism. Intriguingly, as an example of what he meant, he included the idea that the “West is bad,” as well as elsewhere arguing that the promotion of “wild conspiracy theories” would also qualify.

Well, the collusion between, for example, British intelligence and Al-Qaeda might sound like a wild conspiracy theory. But, in the context of Britain and Al-Qaeda’s shared enemies in the form of Gaddafi and Assad, this collusion actually did take place. MI5 was facilitating the passage of fighters between Britain, Syria, and Libya, the SAS were training them, and MI6 was equipping them. Indeed, this collusion is not even secret: as late as 2016 the British government openly pledged to send more British troops to Syria to train rebel groups that even the BBC admitted were likely to be allied with Al-Qaeda.

So, is the publication of this information going to be barred now as extremist? Will YouTube and Facebook and Google and Twitter pull these revelations in fear of getting fined for promoting the “wild conspiracy theories” that, according to Cameron, qualify as extremism?

It is clear why the British state is so keen to clampdown on the internet once this kind of information starts going viral. But the election just gone has raised the stakes even further, demonstrating that if the government does not reassert its authority over the internet, it may well have lost control of the political narrative for good. Let’s review what’s just happened:

A month ago, almost everybody was predicting a wipeout for the Labour Party, a repeat of the disastrous 1983 election in which Margaret Thatcher really did win the landslide Theresa May had been predicting for her 2017 Tories. Oh, how times have changed.

This meant that when they portrayed Labour leader Michael Foot as a bumbling oaf, that became the abiding image of him. A tiny handful of millionaire Tories effectively had total control over the public image of every politician in the land.

This time around, it’s a different story. The newspapers and the TV threw everything they could at Jeremy Corbyn – ‘he’s a terror-supporting, magic money tree-mongering, Brexit-frustrating Remainiac’ – but people weren’t buying. And why weren’t they buying? Because they’re not reading the newspapers, and they’re not watching terrestrial TV. This time around, people, young people in particular, were increasingly getting their political information from social media – and on social media, the conservatives did not control the narrative.

For example, an RT interview I did about British collusion with terrorism shortly before the election got over one and half million views on Facebook – higher than the daily readership of the Daily Mail. Jonathan Pie’s fantastic piece tearing apart the Tory’s ‘strong and stable’ nonsense, got 11 million views. That is two and half million more than the combined circulation of the Daily Mail, Daily Express, Guardian, Sun, Daily Star, Times, Telegraph, Evening Standard, and the Mirror and Metro – the country’s ten leading newspapers.

Hilariously, when I had just watched one of Theresa May’s speeches on YouTube during the campaign, immediately afterwards YouTube automatically played ‘Liar Liar’, the anti-May anthem that reached number four in the UK pop charts last week. I suspect YouTube auto-played that video after anyone watched anything about Theresa May due to the algorithms that they employ.

So, you can see why the Tories are furious about the internet. They, and the British state more generally, have totally lost control of the narrative. And that’s what cost them this election.

So that’s what this new crackdown on the internet is really about; it’s about regaining control of that narrative. It’s about turning the CEOs of YouTube, Facebook, Twitter, and Google into the Rupert Murdochs of the 21st century – the political allies and mouthpieces of the British state and the capitalist class, and doing this by forging a new relationship that explicitly punishes them if they refuse to play ball.

Even the government’s own ‘reviewer of terrorism laws’, Max Hill, has come out against the move, explaining that “my view is that… we do have the appropriate laws in place, and that essentially the police and security services, and those whose job it is to keep us safe, do have the powers at their disposal.”

He noted that, in his experience, the police unit responsible for identifying online extremist material receive full co-operation from the tech companies already.

Similarly, The Open Rights Group has warned that “to push on with these extreme proposals for internet clampdowns would appear to be a distraction from the current political situation and from effective measures against terror.”

“The government already has extensive surveillance powers. Conservative proposals for automated censorship of the internet would see decisions about what British citizens can see online being placed in the hands of computer algorithms, with judgments ultimately made by private companies rather than courts. Home Office plans to force companies to weaken the security of their communications products could put all of us at a greater risk of crime.”

Those who are worried about extremism should be calling for an end to the British intelligence services’ collaboration and facilitation of terrorism and the extradition of those who have carried out or facilitated attacks abroad, as well as an international investigation and prosecutions of all those involved.

Theresa May’s new proposals do nothing to end the impunity of her own government in the grooming and facilitation of terrorism. Rather, they serve to extend this impunity. They must be resisted.