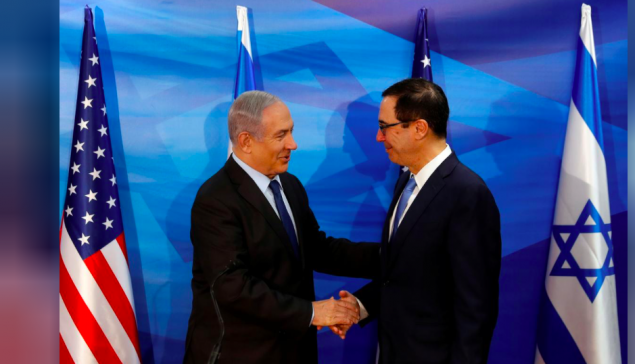 The recent turmoil about what Trump might or might not do, plus the killing of ISIS leader Abu Bakr al–Baghdadi, has enabled the White House to move quietly ahead with its major foreign policy objective, which is, not surprisingly, the destruction of Iran.

There is a certain irony in President Donald Trump’s frequently expressed desire to withdraw from the endless wars that have characterized the so-called “global war on terror” initiated by George W. Bush in 2001. The problem is that Trump has expressed such sentiments both when he was running for office and also as recently as last week without actually doing anything to bring about change. In fact, the greatly ballyhooed “withdrawal” from Syria turned out to be more like a relocation of existing military assets, with soldiers moving from Syria’s northern border to take up new positions to continue control of the Iraqi oil fields in the country’s southeast. Indeed, the number of American soldiers in Syria may have actually been increased with armor units being transferred from their base in Iraq.

The all too characteristic Trumpean flip-flop on Syria may have been due to pressure from congress and the media, who were bleating over how the departure of U.S. troops was a grave mistake, but if that is true it is a tribute to the abysmal ignorance of America’s Solons on the Potomac and the presstitutes who echo their bipartisan myopia. In truth, clinging to the Syrian oil wells makes no sense just as the war in the north served no purpose. The petroleum production is not enough to pay for the occupation, even if the oil is successfully stolen and sold, by no means a certainty as the rest of the world minus Israel regards it as the property of Damascus.

And to be sure, congress-critters know all about winners and losers. The mainstream media has been full of utter nonsense, including claims that Russia, Iran and Syria were all winners due to the American pull-out while neoliberal democracy promotion in the Middle East has suffered a defeat and Israel is now under threat. And, of course, the United States has to its shame betrayed yet another ally in the Kurds while also losing all credibility worldwide.

No one has, of course, examined any of the claims being made by the interventionist crowd. How Russia has won in taking on a client state that it cannot afford, or Iran in maintaining an extraterritorial presence that is regularly bombed by Israel, is by no means clear. President al-Assad meanwhile has the not so enviable task of putting his country back together. Meanwhile the Kurds will manage by cutting their own deal with Syria and Turkey with Russia serving as guarantor of the arrangement.

The real reasons for maintaining a U.S. military presence in Syria all have to do with Israel, which has long supported a fracturing of that country into its constituent parts both to weaken it as an adversary and to enable the Jewish state to steal still more of its land, possibly to include the sparsely populated oil producing region. Israel also wants a robust American military presence in Syria to prevent Iran from turning it into a base for attacks across the border, an unlikely prospect but one that has resonated with the U.S. Congress. Indeed, deterring Iran is the reason most often cited by both Washington and Tel Aviv for American interference in Syria, where it has no other actual interest apart from an apparent demented desire to remove President Bashar al-Assad.

In fact, all of the turmoil about what Trump might or might not do, plus the killing of ISIS leader Abu Bakr al-Baghdadi, has enabled the White House to move quietly ahead with its major foreign policy objective, which is, not surprisingly, destroying Iran. On October 28th, Secretary of the Treasury Steven Mnuchin was in Israel – of course – where he announced at a press conference with Israeli Prime Minister Benjamin Netanyahu that the United States would increase economic pressure on Iran over its nuclear program, saying that  “We have executed on a maximum pressure campaign for sanctions. They have worked, they are working, they are cutting off the money. We will continue to ramp up, more, more, more …” Turning to Netanyahu he added “I just came from a very productive working lunch with your team. They gave us a bunch of very specific ideas that we will be following up.” Netanyahu responded “So I want to thank you for what you’ve been doing and encourage you, Steve, to do more – more, a lot more.”

Mnuchin the Poodle, who did not seem to know that Iran does not have a nuclear weapons program, was referring to the latest round of sanctions, announced in Washington three days before, that are clearly intended to make it impossible for Iran to use the international banking system to engage in any commerce at all. To achieve that objective, the Trump administration sought to exclude Iran from the global financial system by declaring that the country is a “jurisdiction of primary money laundering concern.”

The new designation, which comes on top of the Office of Foreign Assets Control’s (OFAC) similar designation for the Iranian Central Bank, requires U.S. banks to conduct “special due diligence” on accounts maintained by foreign banks if those foreign banks themselves hold accounts for Iranian financial institutions. The chain of secondary sanctions means that, in practical terms, U.S. banks will press their foreign correspondents to close any accounts maintained on behalf of Iranian banks so as to eliminate sanctions risk. This will further sever Iran from the global financial system, as Iran’s few remaining non-designated banks will find it increasingly difficult to maintain accounts abroad.

The Treasury’s designation of Iran as a primary jurisdiction of money laundering will make it impossible for the few Iranian banks that deal internationally to maintain what limited overseas accounts continue to be available to them. The blocking of those accounts, either held directly by the Iranians or through other banks, will mean that Iranian importers will be unable to pay for medicine or food coming into the country, the so-called humanitarian goods that are normally exempted from sanctions. The new OFAC regulation does provide a framework for banks to continue hold Iranian accounts by filing detailed monthly reports, but the paperwork and other procedures are deliberately onerous and it is likely that few international banks will be interested in making the effort to comply.

That there is a coordinated scheme being pursued to continuously increase the punishment of the Iranian people was also suggested last Wednesday when the Trump administration joined six Persian Gulf nations in sanctioning over two dozen corporations, banks and entities that, it was claimed, are connected to Iranian support of Hezbollah and other groups the Department of State designates as terrorists. In a statement, the Treasury Department announced the sanctions mark the “largest joint designation to date” by the Terrorist Financing Targeting Center (TFTC) — which includes Bahrain, Kuwait, Oman, Qatar, Saudi Arabia, the United Arab Emirates and the U.S. According to the Treasury Department, several of the companies sanctioned were financially supporting a subsidiary of the Iranian Revolutionary Guard Corps, which the U.S. designated as a terrorist organization earlier this year.

Treasury Secretary Mnuchin, on his tour of the Middle East, remarked that “This action demonstrates the unified position of the Gulf nations and the United States that Iran will not be allowed to escalate its malign activity in the region.”

Make no mistake, the United States is conducting an economic war against Iran that is undeniably aimed at making the Iranian people so miserable that they will rise up in revolt. And the punishment being meted out will hurt the poorest and weakest most of all while also hardening support for the regime rather than weakening it. Not only is the White House action directed against Iran immoral, it is also illegal as Iran and the United States are not at war and Iran does not threaten Americans in any way. The whole affair is just one more example of how powerful domestic constituencies, in this case that of Israel, have distorted U.S. foreign policy and driven it in directions that are both shameful and that serve no plausible national interest.