The West blinks: Financial Times voices doubts that everyone is feeling about Trump’s Venezuela regime change 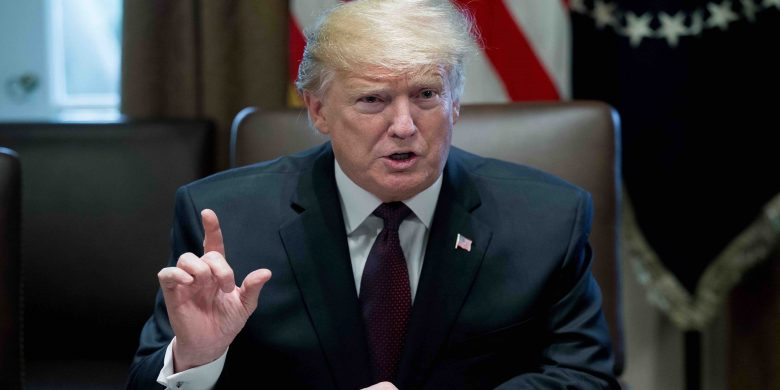 Mandatory Credit: Photo by MICHAEL REYNOLDS/EPA-EFE/REX/Shutterstock (10071712g)
US President Donald J. Trump delivers remarks to members of the news media during a meeting on immigration policy; with members of the Trump administration and conservative leaders in the Cabinet Room of the White House in Washington, DC, USA, 23 January 2019. Trump used the opportunity to criticize US House Speaker Nancy Pelosi, saying she has ‘cancelled’ the State of the Union address. Pelosi has stated she will not authorize the State of the Union address to be delivered in the House chamber during the ongoing partial shutdown of the federal government.
US President Donald J. Trump, Washington, USA – 23 Jan 2019

Although the last sentence about Maduro is incorrect, it is certainly right about a president at war with his own Congress… One that won’t allow him to deliver the SOTU address: “Few doubt that Mr Maduro is a pariah who deserves to be thrown out of power. The irony is that, on any other day of the week, many would say the same of Mr Trump.”

US president’s staying power will be tested by subsequent events

Every now and then the US establishment gives Donald Trump a surprise ovation. Mr Trump’s missile attack on Syria’s regime in early 2017 was the first instance. His all-measures-short-of-war declaration against Venezuela’s Nicolás Maduro on Wednesday is the latest.

Each showed Mr Trump as capable of adopting a traditional US foreign policy stance. In Syria’s case, Mr Trump acted in the name of human rights after Bashar al-Assad used chemical weapons on his own people. With Venezuela, Mr Trump is backing the rule of law against Mr Maduro’s rigged re-election. “Thank you, Mr President,” tweeted Jeb Bush.

The danger lies in Mr Trump’s follow-up. Almost two years since the US launched tomahawks at Syria, Mr Assad is more firmly entrenched than ever — and Mr Trump is set to withdraw America’s 2,000 remaining troops. He quickly lost patience for the Syria chess game. Venezuela poses a different problem. The dangers of an open civil war between supporters of Juan Guaidó, the opposition leader, and self-declared “interim president”, and Mr Maduro’s armed forces are real. Mr Trump is now committed to Mr Guaidó’s victory.

Much hinges on whether Venezuela’s armed forces can be persuaded to heed Mr Trump’s call to follow Mr Guaidó’s orders. If they do not, Mr Maduro could adopt an Assad-style posture of digging in and calling Mr Trump’s bluff. At which point he would be put to the test. In 2017, Mr Trump said he would not rule out a “military option, if necessary” against Mr Maduro’s regime. “We have troops all over the world in places that are very, very far away,” Mr Trump said. “Venezuela is not very far away.” Some might call it Mr Trump’s “Monroe doctrine” by which US treats the western hemisphere as its exclusive back yard.

But those cheering Mr Trump’s new-found zeal for overseas democracy should bear in mind three caveats.

The first is that Mr Trump is selective. He has shown scant interest in speaking up for human rights or democracy in other parts of the world, such as Myanmar, Sudan and China. Nor does the Monroe exception apply: Mr Trump has been as oblivious to rigged elections and human rights abuses in Guatemala and Honduras in the western hemisphere as anywhere else. But why look a gift horse in the mouth? If Mr Trump is selectively doing the right thing, it is surely better than never at all. The problem is that it makes him even less predictable. Either these principles are universal, or they are not. Mr Trump has yet to explain on what basis he takes decisions.

Which brings up the second caveat. Mr Trump is heavily influenced by Cuban-Americans and Venezuelan exiles in Florida. Many rub shoulders with him at his “winter White House” in Mar-a-Lago. Most of Venezuela’s financial elites have long since fled the country, along with a tenth of its overall population. Many exiles bought up condo units in various Florida Trump properties. It is impossible to draw a line between Mr Trump’s business ties and his support for democratic norms in Venezuela. But it is worth stressing that he has consistently spoken up for freedom in just three countries — Cuba, Iran, and Venezuela. For one reason or another, these are in a separate category to the rest of the world. The fact that refugees from Guatemala and Honduras tend to be poor, while the Venezuelans he meets in Florida are not, might have something to do with it.

The third is that Mr Trump is in a brewing constitutional showdown of his own. While he was making his Venezuela statement on Wednesday, Mr Trump was in a tense stand-offwith Nancy Pelosi, speaker of the House, who is refusing to invite him to deliver the annual State of the Union address next week. Mr Trump’s US government shutdown is now in its 34th day. It hinges on his ultimatum of funding a border wall to shut out refugees and migrants from some of America’s decidedly undemocratic near neighbours.

Mr Trump’s Venezuela gamble thus comes at an interesting moment. It puts him on the right side of Washington’s foreign policy community and most of the world. The rest of the hemisphere, including Canada, promptly followed Mr Trump’s suit — and almost word for word. Few doubt that Mr Maduro is a pariah who deserves to be thrown out of power. The irony is that, on any other day of the week, many would say the same of Mr Trump. 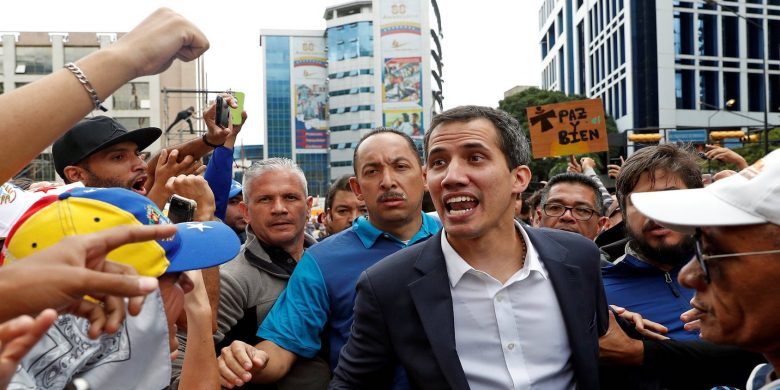 Juan Guaido, President of Venezuela’s National Assembly, reacts during a rally against Venezuelan President Nicolas Maduro’s government and to commemorate the 61st anniversary of the end of the dictatorship of Marcos Perez Jimenez in Caracas, Venezuela January 23, 2019. REUTERS/Carlos Garcia Rawlins