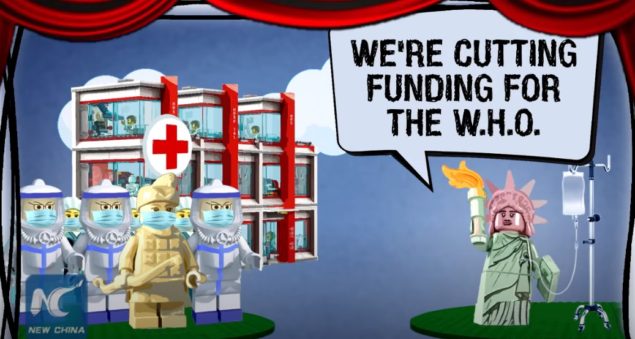 The mutual accusations and recriminations between China and the US as to the origin and nature of COVID-19 are likely to intensify again as a Chinese scientist who recently fled the country has claimed that the virus was created in a Chinese laboratory. Earlier in the year, senior Chinese officials suggested that the virus may have originated in the US before being transmitted to China, and called for a detailed investigation of ‘patient zero’ in each country and the subsequent trajectory of the virus.

The mutual accusations and recriminations between China and the US as to the origin and nature of COVID-19 are likely to intensify again as a Chinese scientist who recently fled the country has claimed that the virus was created in a Chinese laboratory. Earlier in the year, senior Chinese officials suggested that the virus may have originated in the US before being transmitted to China, and called for a detailed investigation of ‘patient zero’ in each country and the subsequent trajectory of the virus.

On Saturday Zero Hedge reported that Dr. Li-Meng Yan – a Chinese virologist (MD, PhD) who fled the country – appeared last week on British television where she claimed SARS-CoV-2, the virus which causes COVID-19, was created by Chinese scientists in a laboratory.

Earlier today another report by Zero Hedge notes that on Sunday, Li-Meng took her accusations to Twitter – and on Monday, she tweeted a link to a paper she co-authored with three other Chinese scientists titled “Unusual Features of the SARS-CoV-2 Genome Suggesting Sophisticated Laboratory Modification Rather Than Natural Evolution and Delineation of Its Probable Synthetic Route”.

Summing up her research and conclusions Li-Meng Yan stated:

“The evidence shows that SARS-CoV-2 should be a laboratory product created by using bat coronaviruses ZC45 and/or ZXC21 as a template and/or backbone. Building upon the evidence, we further postulate a synthetic route for SARS-CoV-2, demonstrating that the laboratory-creation of this coronavirus is convenient and can be accomplished in approximately six months…

The receptor-binding motif of SARS-CoV-2 Spike cannot be born from nature and should have been created through genetic engineering.”

She goes on to cite numerous publications by scientific researchers based in Wuhan relating to the investigation of a variety of virus strains, and alleges that they were conducting research aimed at the “enhancement of the infectivity and pathogenicity of the laboratory-made coronavirus”.

This is not the first time that specific allegations have been made claiming that COVID-19 was created in a laboratory, whether in China or elsewhere. In March of this year Veterans Today reported:

In October 2019, the US brought 172 (really 369) military athletes to Wuhan for the World Military Games.  Despite having the largest military in the world, tenfold, the US came in 35th behind nations like Iran, Finland and Slovenia. No video or photos exist of the US team, no records were kept, a huge team but a pitiful performance for the best military in the world.

The US team did so badly that they were called “Soy Sauce Soldiers” by the Chinese.  In fact, many never participated in any event and stayed near the Huanan Seafood Wholesale Market, where the disease is said to have originated only days after the US left the area.

The US team went home on October 28, 2019, and within 2 weeks, the first human contact cases of COVID 19 were seen in Wuhan.  The Chinese have not been able to find ‘patient zero’ and believe he was a member of the US team.

They also have sources that say the US had misrepresented influenza that Trump claims have killed thousands, influenza carried to China by the US team, influenza that was really COVID 19, a disease developed in a military bio-warfare facility in the state of Washington, now ‘ground zero’ in the US for COVID 19.

The Chinese claim, something censored in the US, that the inattentive attitude and disproportionately below average results of American athletes in the game indicates they might have been in for other purposes and they might actually be bio-warfare operatives, and that their place of residence during their stay in Wuhan was also close to the Huanan Seafood Wholesale Market, where the first known cluster of cases occurred.

A report from RT, cited in the same article by Veterans Today, also noted the allegations, stating:

The US army might have brought the novel coronavirus disease (COVID-19) to China’s Wuhan, the city where the virus was first detected in the country, Chinese Foreign Ministry Spokesman Zhao Lijian said on Thursday.

“When did patient zero begin in the US?  How many people are infected?  What are the names of the hospitals? It might be the US army that brought the epidemic to Wuhan. Be transparent! Make public your data! The US owes us an explanation!” Zhao tweeted.

Chinese foreign ministry spokesperson Lijian Zhao has demanded US authorities reveal what they’re hiding about the origins of Covid-19, going as far as to suggest the coronavirus may have been brought to China by the US military.

A follow-up investigation by Veterans Today tracked related research to a university in North Carolina.

The most recent claims could set off another round of mutual accusations and recriminations, amplified and distorted by the hostility and mutual suspicion that currently exists between China and the US. The urgent need for an impartial and fact-based international investigation has been emphasized in a previous report by South Front.

The South Front report noted that the vast scale and inherently secretive, fragmented, compartmentalized nature of military and corporate R&D programs makes even the most minimally effective forms of rational oversight and control impossible, raising the spectre of the apocalyptic Hollywood scenarios of Artificial Intelligence robots, nuclear, biological or some other type of cataclysmic weapons wreaking havoc.

There is no supervision and accountability for the experiments and activities going on beyond those actually involved in the projects and their military and corporate overseers, not just in terms of the technical details but in terms of the fundamental aspects of objectives, goals and assessing the inherent risks of the programs, whether at the local, national or international level.

The Coronavirus outbreak is a case in point. Who can say whether it is a natural mutation or a laboratory invention that escaped or was deliberately released? Gilad Atzmon has written a thought provoking piece on this.

Atzmon’s analysis contains many pertinent preliminary points for an investigation of the source and nature of the virus:

Since we do not know its provenance, we should treat the current epidemic as a potentially criminal act as well as a medical event. We must begin the search for the perpetrators who may be at the centre of this possible crime of global genocidal proportions.

While medical diagnosis is defined by:

Criminal investigations are primarily engaged with the human element. The criminal investigator seeks to ascertain the methods, motives, and identities of criminals, the identity of victims and may also search for and interrogate witnesses to the crime.

Treating the Corona virus as a crime would mean searching for possible offenders: individuals, institutions, or states that may have created the lethal virus as part of a research program or more directly, as an agent of biological warfare.

Law enforcement agencies often allocate dozens of investigators, officers, detectives and agents to untangle a single homicide. One would expect that following the deaths of tens of thousands around the globe, every police force, government and intelligence agency would join forces in the attempt to identify the possible culprit(s) at the root of the coronavirus crisis. We may be dealing with a negligent or criminal event on a massive scale…

A number of scientists have commented that laboratories and research centres have been engaged in the study of corona viruses and experimented with models that resemble the current virus. Specifically, some have pointed to a North Carolina laboratory that experimented with the viruses extracted from bats in 2015…

In 2014 the US National Institute of Health removed its funding of gain-of-function (GOF) experiments involving the influenza, SARS, and MERS viruses…

Treating the Corona virus outbreak as a crime ought to include a visit by the FBI to the office of the National Institute of Health and a careful review of all the files related to American laboratories conducting GOF experiments with Coronavirus. This investigative procedure must be exercised in every region and country in the world that has engaged in GOF experiments…

A criminal investigation would have to examine Chinese as well as Russian, British, French, German, etc. laboratories and their safety records…

Israel, with its extensive biological warfare laboratories and WMD facilities must also be subject to thorough scrutiny…”

There are of course many, many other investigations, all of which must be collated and cross-checked, verified or dismissed.

A ‘crime scene’ based analysis must consider all possible culprits, to start with all countries that possess knowledge and capabilities in all related fields of technology and research, development and production, until and unless it has been demonstrated to everyone’s satisfaction that they can be eliminated from the list of suspects.

Any countries that are prepared to make allegations against others (such as the US and China, which have been exchanging mutual accusations for some time now) must either disclose their evidence and reasons behind their accusations for independent verification by the world community or shut up.

If the ‘international community’ and national government are genuinely interested in determining the source and nature of the virus, all formal and documented accusations must be thoroughly and transparently investigated, with all countries contributing their most experienced and highly qualified scientific, medical, forensic and other experts to investigate the characteristics and impacts of the virus in their country as well as contribute to the international investigation.

Their efforts must be subject to thorough peer review as well as full and informed public analysis and debate – the world cannot afford more of the ‘national security’,  ‘Security Council veto’, ‘diplomatic immunities and privileges’, ‘commercial confidentiality’, ‘trade secrets’, ‘it’s too complicated for the masses to understand’ bullshit.

In at least some cases, possibly many, a country has established military and scientific bases and research facilities in other countries; these must of course be included. The US is undoubtedly the most prolific in this regard, engaging in many secretive bilateral agreements, contracts and partnerships to conduct nobody seems to know what exactly – least of all the citizens of ‘host countries’ affected. The links to the investigative reports above provides a wealth of starting points in this respect.

But it is not just Nation-States that must be considered. It is most important to include all facilities and activities of the sprawling financial-military-industrial complex involved in related activities. Some of these corporate-industrial-scientific behemoths are probably the only institutions that are even close to matching the capabilities of ‘The Pentagon’ to outsource, offshore and camouflage programs and installations for the research, development and production of materials related to biological weapons. This would include all of the biochemical, pharmaceutical, etc. giants, as well as all other major research and development foundations of all types involved in activities in potentially related fields.