The US, Not Iran, Is the Rogue State 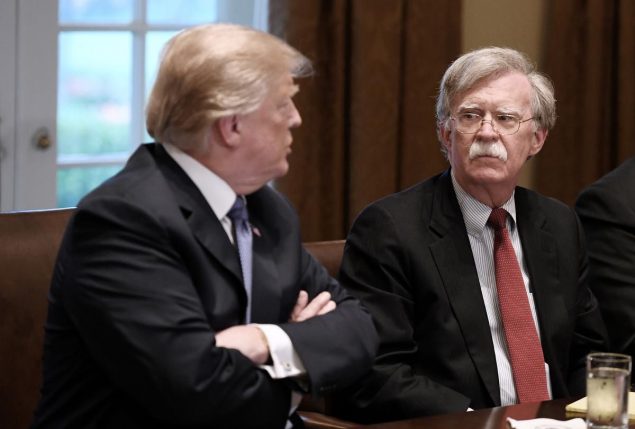 US aggression towards Iran

This essay, originally published at the end of June, asks why Trump says he wants to prevent Iran from developing nuclear weapons, yet he wrecked an international agreement that was doing just that. Now we’re edging closer to a war that the US says it doesn’t want but is doing everything to cause.

When he’s not threatening Iran with “obliteration,” Donald Trump has, of late, noted his preference for negotiations over war. He’s reportedly asked his advisers, including hawkish Secretary of State Mike Pompeo and ultra-hawkish National Security Advisor John Bolton, to “tone down” their rhetoric on Iran. His Iran envoy, Brian Hooks, has told Congress that the goal of the administration’s “maximum pressure” sanctions campaign is negotiations, not conflict.

So let’s take Trump at his word. Maybe he is interested in cutting a deal. Let’s further acknowledge that the administration might not be comfortable relying on Iran’s word (Tehran has insisted that it “will never pursue a nuclear weapon ”) or even on the word of US intelligence (which in a 2007 report concluded that Iran stopped what nuclear weapons work it was doing in 2003). What kind of agreement would it then be looking to negotiate with Tehran?

To be viable, the plan would need to be an international one that involved not just the US and Iran, but China, Russia, and major European states. All these states would have to jointly take action to ensure that Iran fulfilled its obligations under the pact and that it benefited from doing so. The deal would need to be comprehensive, covering all aspects of Iran’s nuclear program; include a mechanism for enforcing Iranian compliance; and provide Iran with relief from the current array of US and international sanctions.

This hypothetical deal would be a win-win for all parties: the US and company would get their coveted denuclearization, and Iran would be freed from the sanctions that have wreaked havoc on their economy.

There’s just one problem: that kind of deal has already been crafted. It’s called the “Joint Comprehensive Plan of Action” (JCPOA) — the 2015 accord that Iran agreed to with the United States, China, France, Germany, Russia, and the United Kingdom. The same accord that Trump chose to scrap last year, which has now brought the US and Iran to the brink of a military confrontation.

While Trump spent the 2016 presidential campaign trashing the JCPOA — calling it “the worst deal ever negotiated” and declaring his “number one priority” would be to “dismantle” it — arms control experts have supported it as an effective tool. More than eighty non-proliferation specialists signed a joint statement in 2017, before Trump abandoned the accord, saying that the JCPOA “has proven to be an effective and verifiable arrangement that is a net plus for international nuclear nonproliferation efforts” as well as “an important success of multilateral diplomacy, the full implementation of which is critical to international peace and security.”

When it was negotiated in 2015, the JCPOA’s premise was simple: in return for accepting limitations on its nuclear power program and an intense inspections regime to verify its compliance, Iran would get relief from US and international sanctions. By obligating Iran to redesign a heavy water reactor that could have generated significant plutonium waste and establishing strict limits on Iran’s uranium enrichment program, it closed off both of Iran’s potential pathways to a nuclear weapon. Most critically, Iran agreed to an unprecedented level of monitoring and inspections to verify its compliance. That work has been done by the International Atomic Energy Agency, which has repeatedly affirmed Iran’s adherence to the deal.

This is the agreement that Trump chose to violate last year. With his reimposition of US sanctions — which apply not just to US entities but all parties seeking to do business with Iran — it has become impossible for Tehran to receive any benefits despite its fidelity to the deal. Although the remaining signatories to the JCPOA have to shield some Iranian commerce from US penalties, those efforts have been very limited in scope and are, thanks to US dominance in the global financial system, still ultimately vulnerable to sanctions.

It’s little wonder that the Iranians have recently begun scaling back their own commitments to the nuclear deal and plan to continue scaling them back. Amazingly, the Trump administration has warned Iran against doing so — it “still expects Iran to abide by [the JCPOA’s] terms,” according to NBC News. But the US withdrawal from the JCPOA, combined with the Trump administration’s zealous application of sanctions, has destroyed the pact. For all intents and purposes, there is no JCPOA anymore, and the notion that Iran would continue to adhere to a dead accord is, to say the least, unreasonable.

If it appears that the Trump administration’s approach to Iran is incoherent, that’s because it is. Trump says he wants to prevent Iran from developing nuclear weapons, yet he wrecked an international agreement that was doing just that. His advisers say they want to force Iran to negotiate over an expanded deal that addresses the original’s perceived shortcomings, but the best way to encourage Iran to keep talking would have been to make sure that it received all of its promised perks under the JCPOA.

Now Iranian leaders call the US offer to talk a “deception,” and even ostensible US allies like France say they’ve seen “no signal the US is interested in dialogue.” The administration claims it wants to build a “global coalition” to isolate and counter Iran, but its actions have only isolated the US and shown that it, not Iran, is the rogue state in this situation.

The Trump administration has made sanctions an end unto themselves, heaping more and more on Iran and offering Tehran no chance to alleviate them that doesn’t involve some kind of capitulation. After the most recent round of US sanctions — which targeted Supreme Leader Ayatollah Ali Khamenei himself — Iran suggested that the “path to diplomacy” is now closed, and there’s no reason to doubt they mean it.

The one constant over the past forty years of Iran-US relations has been Washington’s deep desire for regime change in Tehran. Seen in that light, the administration’s refusal to create an off-ramp to deescalate this entirely US-made crisis may be deliberate — part of a plan to punish the Iranian people so severely that they eventually rise up and topple their government on Washington’s behalf. But there’s no indication that the effort is working, and in the meantime millions of people are suffering for it while the Persian Gulf region edges closer to a war that the US says it doesn’t want but is doing everything to cause.