The Ukraine obsession of the Canadian government


Where will the obsession with Ukraine of the Harper government end? Now it is sending 200 soldiers to “advise” Kiev in his “little war” with Russia, even as the fragile truce that would put an end to hostilities seems compromised. 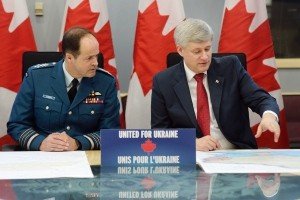 What, exactly, is Canada doing in the heart of Europe, in a conflict where it has no national interest – a conflict, if matters are handled in a cavalier manner, could engulf the Old Continent?

Human folly, alas, has no limit. We recall how the First World War began: an individual action, rather unimportant, spawned a deadly escalation that precipitated a murderous escalation that lasted four years.

The presence of 200 Canadian soldiers more than one thousand kilometers from the combat zone will not change much militarily. Already, 800 Americans and 75 Britons are on the ground. But it will be seen by Moscow as another provocation, following NATO’s moving of missile bases eastward to the Baltic states, two steps from the Russian border, and the European Union’s acceptance of an economic partnership with a Ukraine which has always been in the orbit of Russia.

In was in response to these provocations that Vladimir Putin decided to recover the territory of Crimea. It had belonged to Russia until 1954 when Nikita Khrushchev, in a day of great drinking, it is said, ceded Crimea while maintaining Russian military bases there. Since then, Russia is covertly encouraging pro-Russian rebels who want to link the Russian-speaking east of Ukraine to Russia.

The inopportune intervention by the distant Canada only adds more fuel to the fire.

Former Foreign Affairs Minister John Baird started the ball rolling in December 2013 when he participated, against all diplomatic rules, in a hostile demonstration against the Russian-leaning government of the day in Kiev.

At the G20 summit meeting last November, true to the frank and brutal approach that characterizes his relations with foreign countries, Mr. Harper speared President Putin with the tone of a small, school yard bully, saying “Get out of Ukraine! ”

The White House, France and Germany are showing some restraint. Europe has wisely refused to grant this mismanaged and corrupt country the entry card to the EU so coveted by the Kiev authorities. Mr. Harper, meanwhile, is on the wavelength of the American Republicans, big proponents of forceful intervention in Ukraine.

Some Canadian officials abroad have even been counseled by Ottawa to leave any meeting attended by a representative of Russia!

Sitting in the front row, the powerful Canadian-Ukrainian lobby applauds. Thousands of citizens of Ukrainian origin, and more generally those whose ancestors suffered in the former USSR, form an electorate that the Conservatives haven’t ceased to woo (as well as the Liberals before them).

The electoral soliciting began with this absurd project of constructing a monument to “victims of communism” in the heart of the federal capital, steps away from the Supreme Court.

Certainly, communism created countless victims, in Europe, China or Vietnam. But why a monument here and now, at a time when communists everywhere are on the road to extinction? Perhaps the petty aim here is that this big building will crush in its massive shadow the delicate edifice of the Supreme Court, the number one enemy of the Harper government? But of course, the primary aim is to accommodate an electorate eager to do battle with Russia.

Electioneering is a normal phenomenon in politics. But the Ukrainian obsession of Stephen Harper is a little dangerous game. One is drawn to say to him, “Get out of Ukraine, Mister Harper!”

Note by New Cold War.org editor: La Presse is the largest circulation French-language newspaper in Quebec and in North America. The above commentary by Lysiane Gagnon is a rare, perhaps the first, critical commentary about the Canadian intervention in Ukraine to appear in the mainstream or left wing press in the province of Quebec. In the Parliament in Ottawa and the National Assembly in Quebec, not a single elected member has criticized or opposed the intervention.