The UK suffers the worst recession of any G7 country 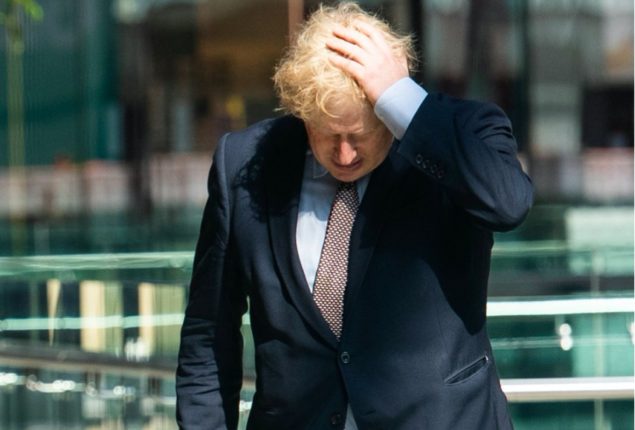 Britain has now recorded the largest fall in GDP of any major country as well as the highest excess death rate in Europe.

The UK’s performance during the Covid-19 crisis has been confirmed as world-beating – but in the worst sense possible. Today’s release from the Office for National Statistics shows not only that Britain has entered the deepest recession in its history, but also that it has suffered the worst recession of any G7 country.

Boris Johnson’s government imposed the lockdown late partly in an attempt to protect the economy. But in the event, it has achieved the worst of both worlds. The UK has suffered the highest excess death rate in Europe (with 65,000 deaths) and the deepest recession. And the two are not coincidental: by causing a surge in deaths, the calamitously late lockdown helped destroy economic confidence. The stringent measures that were belatedly imposed – and that choked off growth – endured for longer than elsewhere because the virus had already spread so widely. 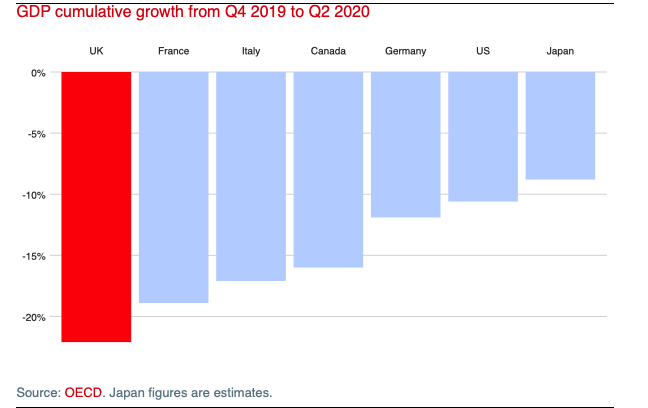 The ONS report shows that UK GDP rose by 8.7 per cent in June, but it would be reckless for the government to assume that the UK will enjoy a sustained “V-shaped recovery”. GDP remains 17.2 per cent smaller than it was in February and a second wave of Covid-19 is looming. Meanwhile, the unwinding of the furlough scheme threatens mass unemployment of the kind the UK last endured in the 1980s.

Faced with this, Chancellor Rishi Sunak is wisely prepared to delay his planned autumn Budget, at which he hopes to announce tax rises and spending cuts. But it was always reckless to plan for austerity when stimulus is required.

Though government borrowing has rarely been higher – the national debt has reached 100 per cent of GDP – it has also rarely been cheaper. Indeed, such is the demand for UK debt from investors that the government has sold bonds at negative interest rates. In other words, investors are paying the British government to take their money.

The reason is that there are few safer havens than UK bonds. Unlike the eurozone countries, Britain retains its own currency and the ultimate magic money tree: the Bank of England. The central bank has already taken the emergency step of creating (or “printing”) new money in order to directly finance government spending. In such circumstances, there is no need for the government to deny essential support for living standards and public services. As JM Keynes was fond of remarking, look after unemployment and the Budget will look after itself.

But by far the greatest stimulus that any government can provide is an effective strategy to prevent the spread of Covid-19. That is what Johnson’s government lacked at the start of the pandemic and, as schools and the economy reopen, what it so desperately needs now. 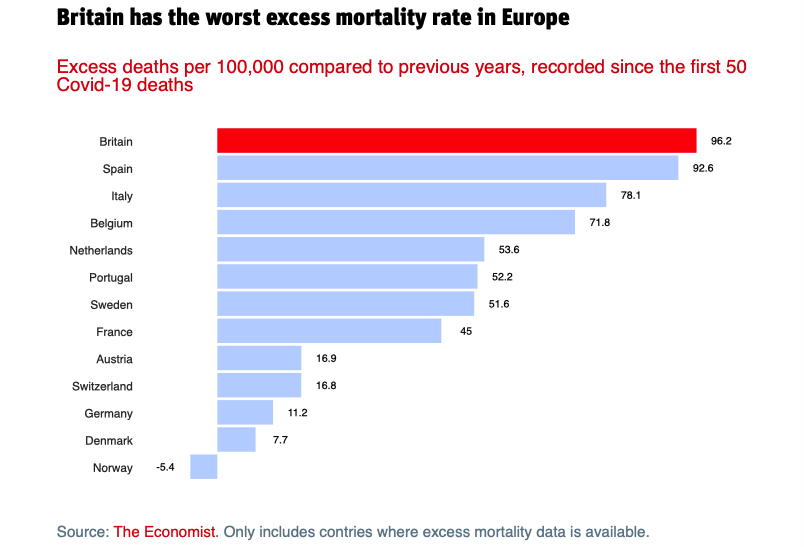 *****
George Eaton is senior online editor of the New Statesman.
Editors’ Note: While we don’t necessarily share the views we publish on New Cold War, we do attempt to provide readers with a range of views. This is because your right to make your own mind up depends on your being fully informed.
Share
Tweet
Share
Pin