The U.S. says Julian Assange ‘is no journalist.’ Here’s why that shouldn’t matter. 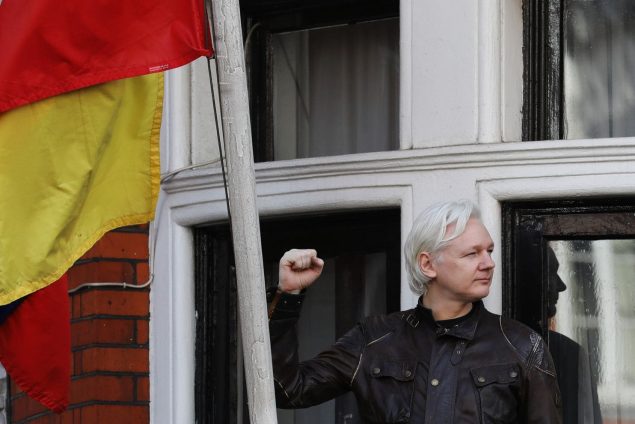 Julian Assange, founder of WikiLeaks, greets supporters before addressing them and reporters from a balcony at the Ecuadorian Embassy in London in 2017. (Luke MacGregor/Bloomberg News)

Fuelled by the self-interested recognition of what is being done to Julian Assange, could it be that the Fourth Estate is finally waking up to what could be done to them?

WikiLeaks founder Julian Assange on Thursday became the first person to face prosecution in the United States for publishing classified information, although newspapers routinely publish government secrets that have been leaked to them.

Defending the unprecedented move, Assistant Attorney General John Demers said “Julian Assange is no journalist.” Millions of Americans no doubt agree. Yet, in making this distinction, the Justice Department is drawing a line the First Amendment simply doesn’t draw — and is threatening the freedom of every news outlet in the process.

The federal indictment alleges Assange solicited and received classified information from Chelsea Manning and published that information through WikiLeaks. The documents he published included official assessments of detainees at the U.S. military base in Guantanamo Bay, files relating to rules of engagement for U.S. troops in the Iraq War and State Department cables. Some revealed incriminating information about the conduct of American soldiers and other government officials. In a few cases, they included the names of foreign citizens who provided intelligence to the United States.

Assange is being charged under the Espionage Act, a law passed during World War I to punish spies and traitors. But in recent years, the law increasingly has been used against government employees who leak classified information to the media. The Obama administration brought eight prosecutions for media leaks — more than all previous administrations combined — and the Trump administration has upped the ante, bringing seven prosecutions in the space of two years. Alarmingly, many of the defendants have been whistleblowers: They disclosed information indicating waste, fraud or abuse on the part of the government. National Security Agency employee Thomas Drake, for instance, was charged with disclosing information about an illegal N.S.A. surveillance program to a Baltimore Sun reporter.

Nonetheless, until now, the Justice Department distinguished between government employees who leak classified information (deemed prosecutable) and outlets that publish it (considered to have First Amendment protection). The Obama administration flirted with erasing that line: In court documents, it described a Fox News chief Washington correspondent, James Rosen, as “an aider, abettor and/or co-conspirator” in an Espionage Act case. (Rosen has since left Fox.) The administration also reportedly considered bringing charges against Assange. But ultimately, Obama’s Justice Department decided prosecuting publishers of leaked information would be a bridge too far.

That was the right decision. Although the Espionage Act does not recognize a line between leaker and publisher, the First Amendment, as interpreted by the courts, does. The Supreme Court has long held that government employees may be required to relinquish some free-speech rights as a condition of their employment. Officials with access to classified information sign nondisclosure agreements in which they agree to be subject to criminal penalties for leaking. Publishers, obviously, sign no such waivers. While the Supreme Court has not directly addressed whether publications can be prosecuted for publishing classified information (because no such prosecution has previously occurred), it has held that the government may not enjoin a newspaper from publishing information based solely on government claims of national security harms.

The Trump administration seeks to move the line. Demers insists that the Justice Department will continue to respect the prerogative of “journalists,” stating, “It is not and has never been policy of the department to target them for reporting.”

Assange, however, engaged in the “explicit solicitation of classified material” and made no effort to redact information that could put people at risk, Demers said. In the Justice Department’s view, Assange is therefore not a “journalist” and is subject to prosecution for his actions.

Demers’s statement glosses over a crucial fact: The First Amendment gives journalists no special rights. In prohibiting abridgments of “the freedom of speech, or of the press,” it gives equal protection to those who speak, those who write, those who report, and those who publish. In the words of the Supreme Court, the purpose of the First Amendment “was not to erect the press into a privileged institution but to protect all persons in their right to print what they will as well as to utter it.”

Nor should it matter that Assange is not a U.S. citizen, a point that the Justice Department emphasizes in the indictment. The First Amendment encompasses the freedom to disclose information and the freedom to receive it. In essence, the right is shared by the speaker and his audience — which in this case includes Americans.

Of course, the freedom of speech is not unlimited. Libel is not protected by the First Amendment, nor is direct incitement to violence. But whether Assange crossed any such lines does not depend on whether he was acting as a journalist. The Justice Department cannot prosecute Assange for publishing information that The Washington Post could constitutionally publish.

The First Amendment also does not protect illegal conduct, such as trespass or robbery, undertaken for the purpose of obtaining information. Assange allegedly offered to help Manning break into government computer systems, which would violate the Computer Fraud and Abuse Act. The Justice Department, however, already charged Assange under that law several weeks ago. The new Espionage Act charges go much further, seeking to penalize Assange for simply “encourag[ing]” and “induc[ing]” Manning’s disclosures.

News outlets routinely cultivate national security officials as sources and solicit information from them, knowing full well that much of the information in those officials’ possession is classified. They also routinely publish information they acquire through such interactions. If that were not the case, the American public would never have learned about the torture of detainees after 9/11 or the wiretapping without warrants of American citizens. In fact, given the extent of overclassification, national security reporting would be impossible if classified information were entirely off-limits.

Still, many Americans instinctively contend that Assange is different. The charges against Assange have nothing to do with the WikiLeaks publication of emails from Democratic National Committee accounts and from Hillary Clinton’s private server, but those incidents color Americans’ perceptions of Assange. They say his goal is to harm the United States, that he may be aligned with Russia, and that he cannot be trusted to make responsible decisions about when to publish classified information. Indeed, few would dispute that Assange acted irresponsibly when he published the names of Afghans and Iraqis who cooperated with U.S. forces.

There is an excellent reason, though, why the First Amendment does not turn on the government’s assessment of a publisher’s level of responsibility or fealty to the United States, one that becomes self-evident when considering President Trump’s comments on the press. The president has referred to many news outlets, including The Washington Post, the New York Times, CNN, ABC, CBS and NBC as “the enemy of the American people” — irresponsible and disloyal. Incredibly, he has declared that “80 percent” of media outlets deserves that label.

A tweet is not a criminal indictment. But no attorney general is immune from political pressures and biases, and some are less immune than others. After the Assange indictment, it is significantly more possible to imagine Attorney General William P. Barr bringing charges against a major news outlet that publishes classified information that puts the Trump administration in a bad light. The framers of the Bill of Rights were concerned about exactly such an outcome. That is why they chose to protect the rights of every person, not just those whom the government considers to be responsible and loyal journalists.

Robust protection for speech means that people will sometimes make bad calls, revealing potentially harmful information of little public interest. Society can and should condemn those disclosures. But there can be no “Assange carve-out” to the First Amendment. The Justice Department’s attempt to rewrite this core constitutional protection is a threat to every person or entity who publishes information — and every American who receives it.

Elizabeth Goitein is co-director of the liberty and national security program at the Brennan Center for Justice at New York University School of Law.