The U.S. is now betraying the Kurds for the eighth time 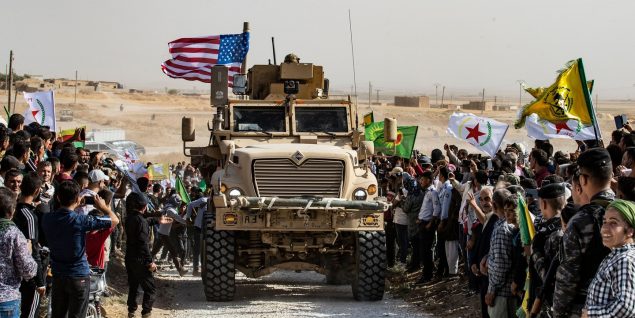 Syrian Kurds protested on Sunday outside a U.S.-led international coalition base near the Turkish border in Syria. Photo: Delil Souleiman/AFP via Getty Images

Washington’s announcement to withdraw the US army from Northen Syria, while giving the green light to Turkey to invade, is a betrayal of the Syrian Kurds who loyally fought and died alongside the US in the destruction of Daesh, but it is by no means the first…

The White House announced Sunday night that the United States is giving Turkey a green light to invade northern Syria, with the U.S. troops there now apparently pulling back to another area of the country. This is the scenario that Syrian Kurds have long feared. It will almost inevitably lead to a Turkish attack on Kurdish militias in Syria — fighters who loyally helped the U.S. destroy the Islamic State, but whom Turkey bogusly claims to be terrorists.

So did Trump just betray the Kurds because
(a) He has business interests in Turkey
(b) Erdogan, being a brutal autocrat, is his kind of guy
(c) His boss Vladimir Putin told him to

Remarkable that all three stories are perfectly plausible.

What Krugman left out, however, is the most likely explanation: (d) Trump is president of the United States. Nothing in this world is certain except death, taxes, and America betraying the Kurds.

The U.S. has now betrayed the Kurds a minimum of eight times over the past 100 years. The reasons for this are straightforward.

The Kurds are an ethnic group of about 40 million people centered at the intersection of Turkey, Syria, Iran, and Iraq. Many naturally want their own state. The four countries in which they live naturally do not want that to happen.

On the one hand, the Kurds are a perfect tool for U.S. foreign policy. We can arm the Kurds in whichever of these countries is currently our enemy, whether to make trouble for that country’s government or to accomplish various other objectives. On the other hand, we don’t want the Kurds we’re utilizing to ever get too powerful. If that happened, the other Kurds — i.e., the ones living just across the border in whichever of these countries are currently our allies — might get ideas about freedom and independence.

Nothing in this world is certain except death, taxes, and America betraying the Kurds.

1 — Like many other nationalisms, Kurdish nationalism blossomed during the late 1800s. At this point, all of the Kurdish homeland was ruled by the sprawling Ottoman Empire, centered in present day-Turkey. But the Ottoman Empire collapsed after fighting on the losing side of World War I. This, the Kurds understandably believed, was their moment.

The 1920 Treaty of Sèvres completely dismembered the Ottoman Empire, including most of what’s now Turkey, and allocated a section for a possible Kurdistan. But the Turks fought back, making enough trouble that the U.S. supported a new treaty in 1923, the Treaty of Lausanne. The Treaty of Lausanne allowed the British and French to carve off present-day Iraq and Syria, respectively, for themselves. But it made no provision for the Kurds.

This was America’s first, and smallest, betrayal of the Kurds. At this point, the main Kurdish betrayals were handled by the British, who crushed the short-lived Kingdom of Kurdistan in Iraq during the early 1920s. A few years later, the British were happy to see the establishment of a Kurdish “Republic of Ararat,” because it was on Turkish territory. But it turned out that the Turks were more important to the British than the Kurds, so the United Kingdom eventually let Turkey go ahead and extinguish the new country.

This was the kind of thing that gave the British Empire the nickname “perfidious Albion.” Now America has taken up the perfidious mantle.

2 — After World War II, the U.S. gradually assumed the British role as main colonial power in the Mideast. We armed Iraqi Kurds during the rule of Abdel Karim Kassem, who governed Iraq from 1958 to 1963, because Kassem was failing to follow orders.

We then supported a 1963 military coup — which included a small supporting role by a young Saddam Hussein — that removed Kassem from power. We immediately cut off our aid to the Kurds and, in fact, provided the new Iraqi government with napalm to use against them.

3 — By the 1970s, the Iraqi government had drifted into the orbit of the Soviet Union. The Nixon administration, led by Henry Kissinger, hatched a plan with Iran (then our ally, ruled by the Shah) to arm Iraqi Kurds.

The plan wasn’t for the Kurds in Iraq to win, since that might encourage the Kurds in Iran to rise up themselves. It was just to bleed the Iraqi government. But as a congressional report later put it, “This policy was not imparted to our clients, who were encouraged to continue fighting. Even in the context of covert action ours was a cynical enterprise.”

Then the U.S. signed off on agreements between the Shah and Saddam that included severing aid to the Kurds. The Iraqi military moved north and slaughtered thousands, as the U.S. ignored heart-rending pleas from our erstwhile Kurdish allies. When questioned, a blasé Kissinger explained that “covert action should not be confused with missionary work.”

When questioned, a blasé Kissinger explained that “covert action should not be confused with missionary work.”

4 — During the 1980s, the Iraqi government moved on to actual genocide against the Kurds, including the use of chemical weapons. The Reagan administration was well aware of Saddam’s use of nerve gas, but because they liked the damage Saddam was doing to Iran, it opposed congressional efforts to impose sanctions on Iraq. The U.S. media also faithfully played its role. When a Washington Post reporter tried to get the paper to publish a photograph of a Kurd killed by chemical weapons, his editor responded, “Who will care?”

5 — As the U.S. bombed Iraq during the Gulf War in 1991, George H.W. Bush famously called on “the Iraqi military and Iraqi people to take matters into their own hands, to force Saddam Hussein, the dictator, to step aside.” Both Iraqi Shias in southern Iraq and Iraqi Kurds in northern Iraq heard this and tried to do exactly that.

It turned out that Bush wasn’t being 100 percent honest about his feelings on this subject. The U.S. military stood down as Iraq massacred the rebels across the country.

Why? New York Times columnist Thomas Friedman soon explained that “Mr. Bush never supported the Kurdish and Shiite rebellions against Mr. Hussein, or for that matter any democracy movement in Iraq” because Saddam’s “iron fist simultaneously held Iraq together, much to the satisfaction of the American allies Turkey and Saudi Arabia.” What the U.S. wanted was for the Iraqi military, not regular people, to take charge. “Then,” Friedman wrote, “Washington would have the best of all worlds: an iron-fisted Iraqi junta without Saddam Hussein.”

6 — Nevertheless, the dying Iraqi Kurds looked so bad on international television that the Bush administration was forced to do something. The U.S. eventually supported what was started as a British effort to protect Kurds in northern Iraq.

During the Clinton administration in the 1990s, these Kurds, the Iraqi Kurds, were the good Kurds. Because they were persecuted by Iraq, our enemy, they were worthy of U.S. sympathy. But the Kurds a few miles north in Turkey started getting uppity too, and since they were annoying our ally, they were the bad Kurds. The U.S. sent Turkey huge amounts of weaponry, which it used — with U.S. knowledge — to murder tens of thousands of Kurds and destroy thousands of villages.

7 — Before the Iraq War in 2003, pundits such as Christopher Hitchens said we had to do it to help the Kurds. By contrast, Pentagon Papers whistleblower Daniel Ellsberg had this dour exchange with neoconservative William Kristol on C-SPAN just as the war started:

Ellsberg: The Kurds have every reason to believe they will be betrayed again by the United States, as so often in the past. The spectacle of our inviting Turks into this war … could not have been reassuring to the Kurds …

Kristol: I’m against betraying the Kurds. Surely your point isn’t that because we betrayed them in the past, we should betray them this time?

Ellsberg: Not that we should, just that we will.

Ellberg, of course, was correct. The post-war independence of Iraqi Kurds made Turkey extremely nervous. In 2007, the U.S. allowed Turkey to carry out a heavy bombing campaign against Iraqi Kurds inside Iraq. By this point, Kristol’s magazine the Weekly Standard was declaring that this betrayal was exactly what America should be doing.

With Trump’s thumbs-up for another slaughter of the Kurds, America is now on betrayal No. 8. Whatever you want to say about U.S. actions, no one can deny that we’re consistent.

The Kurds have an old, famous adage that they “have no friends but the mountains.” Now more than ever, it’s hard to argue that that’s wrong.