The Trump-Trudeau Venezuelan ‘Lima Group’ Policy and Its Nemesis 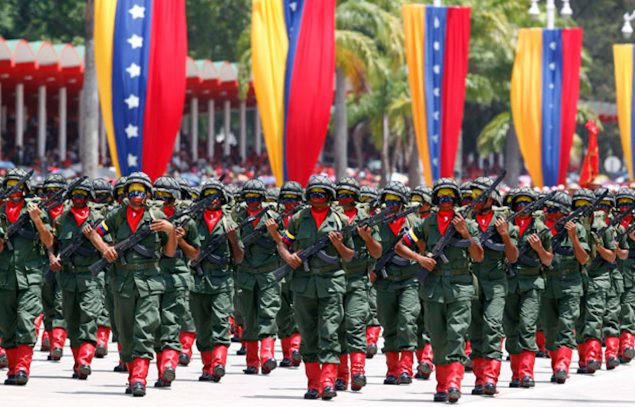 Looking back to a month ago, at the beginning of February, on his return from Caracas, Canadian journalist, lecturer and author Arnold August looks at the reality in Venezuela, the civil-military union, and press freedoms there and in Canada.

After spending two days in Caracas on February 3 and 4, including a semi-private meeting with President Maduro, what follows below is my basic impression. It coincides with the documented, virtually daily on-the-ground reporting by Venezuelanalysis reporters including among the opposition. My perception has more recently been buttressed by the current on-the-spot reporting by, among others, American journalist Max Blumenthal.

The situation in Caracas is the opposite of what is portrayed in the international corporate media in the U.S., Canada and other countries in the West. It is calm. There are no people starving to death, nor “civil war” violence as the media repeat. That is not to say that there is not an economic crisis, but this is largely caused by the crippling economic sanctions and threats that the U.S. has imposed on Venezuela over the last few years. The sanctions and threats began under Obama in March 2015 and were continued by Trump, the Justin Trudeau Liberal government and others.

Many valuable articles have already been published in Venezuela Analysis concerning the legitimate election of Maduro in the last elections of May 2018 on the one hand and, on the other, regarding the violation of Venezuelan and international law, including the United Nations in “recognizing” its man in Caracas. Furthermore, the main issue now is the right of Venezuela to its sovereignty and to choosing its own path without foreign interference, irrespective of any other consideration. Moreover, within this optic, the principal reality – ignored by the international media – is the civilian military union as a key component of Venezuelan democracy. It is not recognized either by ignorance or by mere wishful thinking, as those who want to eliminate the Bolivarian Revolution know very well it is this union that blocks their plan.

One of the main features of the civilian military union is that by its very nature it defines Venezuela’s socialist experience as being anchored in a participatory democracy irrespective of how imperfect it is.

On February 23rd 2014, Venezuelanalysis published one of my articles on Venezuela, this one entitle “Obama’s Arrogant Interference in Venezuela and Resistance by A Participatory Democracy.” What has happened over the last five years? The U.S. has not been able to conquer Venezuela. One of the main reasons is the yet further development of the civilian military union which is pushing Venezuelan democracy from the participatory stage to the higher protagonist level.

Millions of Venezuelan revolutionaries are once again facing off directly with the U.S. They are politically conscious and consider themselves to be the author of their own revolution. This what I witnessed once again in Venezuela. This movement has been, and will continue to be, the nemesis of the U.S. game plan. It is very far from the notion of having voted in favour of someone, for example the President or members of the Constituent Assembly or Governors and expecting them to “deliver the goods” and defend the country’s sovereignty on their own.

What is this Civilian Military Union?

Although February 4, 2019 was not the first time that I had heard Maduro speak, his February 4 talk in that semi-private meeting with Venezuelans and foreign guests was a clincher. Among other points, he outlined in detail how he and the other leaders (whom I also met briefly in that meeting) have been and are today still working to organize and inspire – and in turn are being inspired by – all the sections of the armed forces all over the country, from pilots, navy to the army to the people’s militia. He pointed out that this civilian military union has been developing in the country over several decades.

To flesh this out, I would add that more recently in the 1990s Chávez spent considerable time and effort to build a civilian military union. The goal was to overthrow the U.S.- backed de facto dictatorship that had ruled for many decades through the “two-party system” – all too familiar to Americans – alternating from one discredited party to another… that also soon became disgraced and so on.  On February 4, 1992, Chávez and other officers and civilian revolutionary leaders organized a coup to overthrow the corrupt wealthy political elite to be replaced by the Bolivarian principles of independence and social justice. It failed, but then Chávez returned from prison to declare to the people on state TV that “for the moment” [por ahora] the rebellion had failed. This now iconic image and perspective words had further cemented the union between the military and the civilian population who had never before seen a political-military leader ready to give his life for a new Venezuela.

Chávez said that he found the idea of the civilian-military alliance in the political thought of the Venezuelan intellectual, guerrilla leader, Fabricio Ojeda, who wrote in his 1966 book La guerra del pueblo (The People’s War): “The anti-feudal and anti-imperialist basis of our revolutionary process suggests a form of alliance that can accommodate differences in background, political credo, philosophical conception, religious convictions, economic or professional status, or party affiliation among Venezuelans. The strength and might of the common enemy calls for a united struggle to defeat it… The forces most inclined to fight for national liberation are the workers, peasants, petty bourgeoisie, students, intellectuals, and professionals as well as the majority of officials, Non-Commissioned Officers (NCOs), and soldiers of the air, sea, and land forces…” In Ojeda’s vision, which Chávez shared, all these civilian and military sectors are called upon to come together in a genuine national revolutionary alliance. (Ramonet, Ignacio, Hugo Chávez: Mi primera vida. Conversaciones con Ignacio Ramonet, Vintage Español, Nueva York, 2013. [Translation by Arnold August]).

While Maduro declared in his February 4 speech to us that his government is ready to participate in any efforts at mediation, he also made clear that Venezuela is ready to defend its country: “Not one Yaqui soldier will enter Venezuela.”

The threat of U.S.-led military intervention is more real than ever. The issue is as follows: no to military intervention in Venezuela and full support for the right of Venezuela to defend itself in the worse-case scenario. Polls in Europe and other countries show support for this position, while the main unions in Canada have issued and are issuing statements rejecting the pro-Trump position of the Justin Trudeau Liberal government, while demonstrations are taking place in the U.S.

The Justin Trudeau government hosted the so-called Lima Group in Ottawa on that same day, February 4, when we were in Caracas meeting with the Madura government leadership. The official Ottawa communiqué reaffirmed its support for the Trump position on Venezuela, consisting of foreign interference in the internal affairs of that country with full support of its puppet as the so-called president. The position of the Justin Trudeau government is a major and historical (in the very negative sense of the term) change in Canadian foreign policy, including within his own Liberal Party. In contrast for example, on the occasion of the 10th anniversary of the Iraq War (March 2013) former Liberal Party Prime Minister Jean Chrétien said in an interview regarding Canada’s position to NOT support the U.S. war in Iraq, that

[Chrétien] has no regrets about rejecting Canadas participation in the U.S.-led mission. It was a very important decision, no doubt about it. It was, in fact, the first time ever that there was a war that the Brits and the Americans were involved and Canada was not there, Chrétien told CTV’s [Canadian national news network] Power Play.

The move also helped assert Canada’s independence on the world stage, he said.
Unfortunately, a lot of people thought sometimes that we were the 51st state of America. It was clear that day that we were not.

Chrétien said he refused to commit to military action in Iraq without a resolution from the UN Security Council. He said Canada always followed the UN and intervened in other conflicts when asked to.

Chrétien also said he was not convinced that Iraq had weapons of mass destruction – the threat that fuelled support for a U.S.-led invasion of the country – and that turned out to be true.

He said he went because he knew Chávez personally and “never had any problem” with the controversial leader, even though he didn’t agree with him “on many things.” He also wanted to show his respect for the people of Venezuela.

He had support of the people and he was loved by the poor of his country. He was kind of a Robin Hood, Chrétien said.

Prime Minister Stephen Harper [of the Canadian Conservative Party] angered the Venezuelan administration by saying in a statement that he hoped the country can have a better, brighter future after Chávez’s death.

Chrétien said the Venezuelan authorities were very, very happy to see him at the funeral, because they were very unhappy with Harper’s remarks.

Let us recall what everyone in Cuba, many in Venezuela, much of Latin America, and Canada knows: Justin Trudeau’s own father (Pierre-Elliot Trudeau), as the then Liberal Party Prime Minister of Canada, went to Cuba when he stood next to Fidel Castro in June 1976 and shouted in a public meeting “Long live Prime Minister Fidel Castro!”, and had taken other positions independent of the U.S.

In whatever system, over time and generations, family relations and characteristics change. The powerful revolutionary Bolivarian movement recognizes this, judging from the very favourable and spontaneous reaction to my short presentation to them last February 4, in Caracas. I drew a clear line of distinction between on the one hand the millions of Canadian workers who are taking an anti-imperialist stand and on the other hand the Trudeau government.

The international press can quote this Canadian as the author of these lines: “Justin Trudeau’s father would turn over in his grave if he knew what his own son was doing.” Everyone in Canada hates Trump for all his policies, yet Justin Trudeau is aligned with him.

Freedom of the Press in Canada? Ask TeleSur

The Trudeau government, while giving lessons to Venezuela about democracy and freedom of the press for example in the February 4, Ottawa Lima Group meeting, denied access to Telesur. This is the email that Patricia Villegas, President of teleSur, received following the request to cover the Lima Ottawa meeting (a screen shot taken by the author from Villegas’ Twitter account): 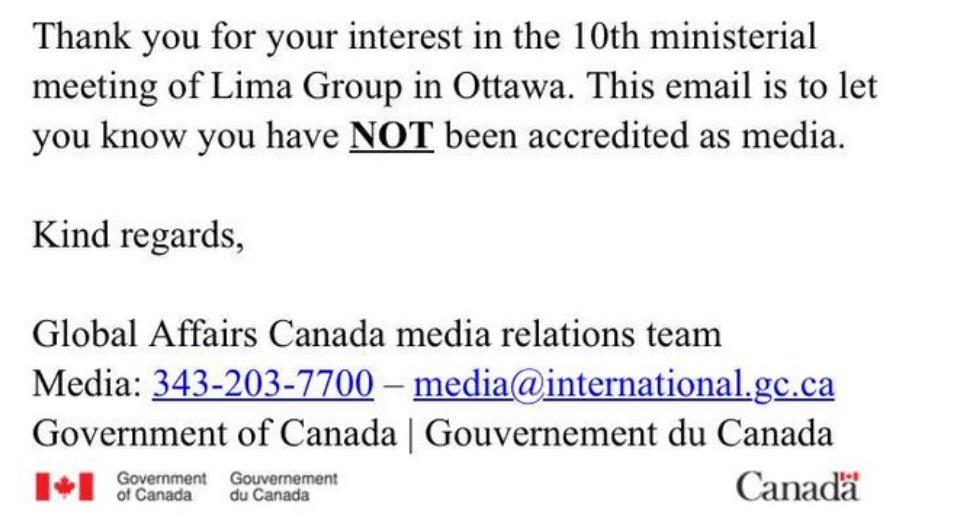 Venezuelanalyis has its own experience with Western-style “freedom of the press” when Facebook temporarily shut down its site. As we say in Quebec, “plus ça change, plus c’est pareil” (The more things change, the more they stay the same.)