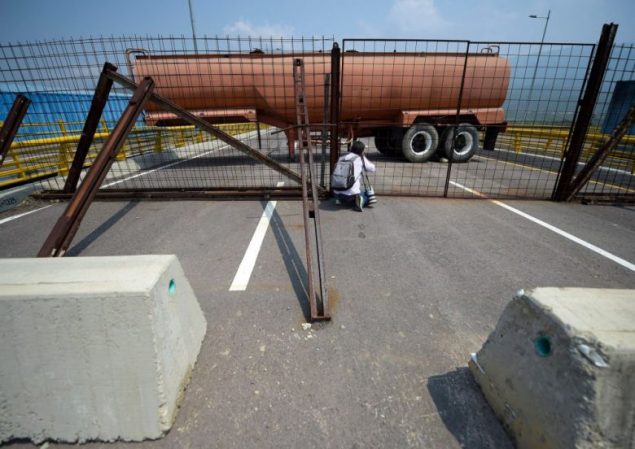 A review of how the Tienditas Bridge story is being used and distorted by the international media to suit the US policy of anti Maduro propaganda and the weaponization of the delivery of so called humanitarian aid, in response to their own punitive sanctions.

…Or how to turn an unopened bridge into an international news story to build support for your coup.

Over the last couple of days, you may have seen an image like this in the news: 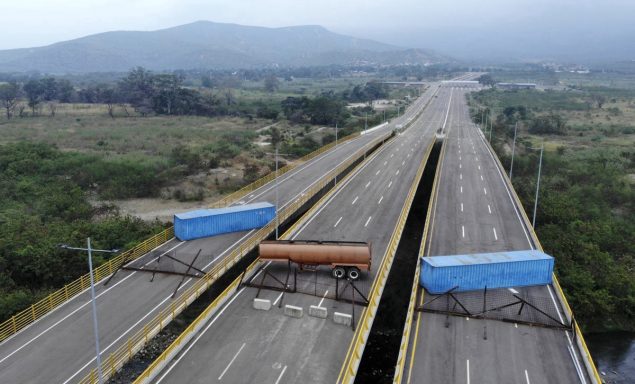 This is Tienditas International Bridge (Spanish: Puente Binacional Tienditas) on the border between Colombia and Venezuela. I have a feeling that we will be seeing much more of this bridge in the news over the coming days.

Venezuela is a country in crisis. More specifically, a presidential crisis. The president since 2013, Nicolás Maduro, was re-elected in 2018, but the election is disputed by the opposition. An opposition politician, Juan Guaidó, declared himself as interim president on January 23rd 2019 (despite not having stood in the 2018 election). The US and allies (including my country, the UK) have recognised Guaidó as president. Other countries continue to recognise Maduro as president. It appears that Maduro holds more power within the country, particularly as the military still support him.

The presidential crisis is a symptom of ongoing economic and political difficulties within Venezuela. I won’t comment on which side is right or who is to blame for the situation, but I do understand that a lot of people are struggling and suffering.

What I want to cover here is not the situation in Venezuela itself, but the state of media reporting on the situation, and the lack of any scrutiny of US propaganda regarding Venezuela. Let’s return to Tienditas Bridge.

On Wednesday, US Secretary of State Mike Pompeo posted on Twitter:

The Venezuelan people desperately need humanitarian aid. The U.S. & other countries are trying to help, but #Venezuela’s military under Maduro's orders is blocking aid with trucks and shipping tankers. The Maduro regime must LET THE AID REACH THE STARVING PEOPLE. #EstamosUnidosVE pic.twitter.com/L4ysYJaM6H

The photo depicts Tienditas International Bridge, blocked by a fence, a few concrete blocks, two containers and an oil tanker. This photo along with Pompeo’s words paint an image of Maduro as a mad dictator who does not care about the people of his country, and is willing to shut down and blockade a huge six-lane highway in order to stop them eating.

In the day or so following Pompeo’s tweet, every mainstream news outlet reported on this story, but it appears none of the writers bothered to question the narrative put out by Mike Pompeo. Most of the stories were incorrect and omitted key facts, as I will show.

Here are a selection of the reports. I’ve highlighted the inaccuracies.

US Secretary of State Mike Pompeo has demanded Venezuela reopen a bridge on the Colombian border for an aid shipment organised by the opposition.

The Venezuelan government, led by embattled President Nicolas Maduro, has blocked a bridge connecting Venezuela to Colombia, according to Colombian officials and a CNN photojournalist at the scene.

What is wrong with these reports? What have they left out?

Let’s assume that Venezuela did indeed place the containers where they are. The photo was taken from Colombia, looking into Venezuela.

Luckily, we can view Tienditas bridge on Google Maps:

Does the photo look familiar? A fence with concrete blocks, blocking the bridge.

Let’s take a closer look at the photo:

The photo was uploaded in June 2017. Tienditas Bridge, reported throughout the media as blocked by Venezuela this week, has in fact been blocked for at least 18 months!

There is also a Wikipedia article on Tienditas Bridge (in Spanish). It says of the bridge (translated to English with Google Translate):

It was concluded in early 2016, but due to the crisis between Venezuela and Colombia in 2015 and the border closure of Venezuela the bridge has not been officially opened.

This is backed up by a reference to an article from La Opinion, a local news site of Cúcuta in Colombia (also in Spanish), which states:

Sheltered by an old rusty gate and a guard, this binational work is still useless because of the border situation, despite the fact that the Invias has already completed 100 percent of the route.

The Google translation may not be perfect, but it seems that Tienditas Bridge has never opened even though it was finished three years ago, due to a dispute between Colombia and Venezuela. And the now familiar “rusty gate” has been there all this time. It’s a complete falsehood to say that Maduro “blocked” the bridge this week, that it must “reopen”, or that Venezuela erected “makeshift fencing” this week.

So is the media lying to us? Is there not one mainstream journalist who bothers to do research any more? I suspect a combination of the two:

It’s a sad state of affairs. I feel I can no longer trust anything I read in the media, and have to verify everything myself. In this case, there was enough information available online to do that and find the errors and omissions, but that usually isn’t feasible. It’s certainly not how I want to spend my time. I’m not a journalist.

I would like to suggest a different narrative to that provided by Mike Pompeo and repeated by the media, a narrative which more closely corresponds to the facts.

The US has stated that it will be sending humanitarian aid to Venezuela, at the request of Juan Guaidó whom they recognise as president.

The Venezuelan government led by the elected president, Nicolás Maduro, is concerned that this will be a cover for shipping weapons into the country which may be used to start a civil war. This is not an unreasonable concern given the US’s history of interventionism, and the Venezuelan authorities claim to discovered an illegal shipment of rifles and ammunition from Miami just this week. Faced with such a threat, it seems quite rational to secure the points of entry through which arms could enter the country.

Since Tienditas Bridge is not in use and has never been, it makes sense to reinforce the existing barrier on the bridge (which may have been erected by Colombia).

How can we improve coverage in the media?

The quality of output in the media feels lower than I remember it ever being. I felt despair today as I realised how deceptive this coverage of Tienditas Bridge has been. I don’t know whether the authors intend to deceive or are unaware of the role they play as puppets of the US government’s propaganda.

I will be making a complaint to the BBC, and perhaps other organisations as time allows. I hope others will do the same.