The third siege of Crimea

The following commentary is posted to New Cold War.org for the information of readers. The author treats Crimea as though it is an historic constituent of Ukraine, and he argues that the majority of the Crimean Tatar population have “more loyalty” to Ukraine than to Russia. The first argument is belied by historical fact; the second does not correspond at all to opinion polls of Crimeans, including Tatars, reported in early 2015.

Crimea is renowned for a history of enduring two long and brutal sieges of its most famous city, Sevastopol—in the Crimean War (1854-55) and in World War II. Now a third siege has begun. Since Russia’s annexation of the peninsula in March 2014, the United States and European Union have put Crimea under one of the toughest embargoes in the world. Almost all trade, transport links, and banking transactions have been blocked. The sanctions regime is in fact much harsher than the one on Russia. It is comparable to those imposed on Cuba, Iran, or Sudan, but unique in being applied to a single province of a country rather than a state. 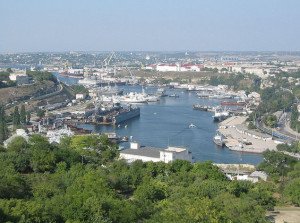 The regime is so strict that American lawyers are advising their clients to have nothing to do with Crimea. Even foreign-made goods that are only 25 percent produced in the United States are subject to the embargo.

More crucially for the residents of Crimea, the government of Ukraine is also imposing tough punitive measures on its lost province, cutting off some transportation links, water, and power. A new draft bill being debated in the Ukrainian Parliament (Verkhovna Rada) proposes turning this into a total blockade.

The avowed purpose is to make Russia pay a high price for its breach of international law, deter it from attempting it again, and force Moscow to come to the negotiating table. “It basically says you can claim your war prize,” a senior U.S. administration official told the New York Times last December, after a new round of sanctions was announced. “But it’s not going to be worth much to you, and we’re not going to make it easy for you.”

Arsen Zhumalidov of the Crimean Institute for Strategic Studies in Kyiv says, “Ukraine sees this situation as the aggressor state has occupied its territory, and it has to win it back by raising the cost to be incurred by Moscow for its deviant behavior.” However, he adds, “The population [of Crimea] is not a subject in the process.”

According to Russian economist Natalia Zubarevich, the costs of annexation are indeed mounting. Zubarevich calculates that the Russian government spent 125 billion rubles ($3 billion by last year’s exchange rates) on Crimea in 2014 in direct subsidy, or more than twice as much as it spent on the second-biggest recipient of handouts, the poor North Caucasian province of Dagestan. She predicted that massive economic subsidies would be needed until 2020.

The influx of cash has had some impact. Russian authorities say they have brought pensions and government salaries in Crimea up to the Russian average (appreciably higher than in Ukraine). But they cannot compensate for a steep drop in tourism since the annexation or for huge logistical problems in supplying Crimea with the essential goods it needs.

The economic siege looks likely to make the plight of Crimeans more miserable. The danger for the Kyiv government and its Western friends is that it may also make them more hostile to Ukraine and dependent on Russia. A point will have been proved, but Crimea may be lost.

Andrei Sambros, a journalist based in the Crimean capital Simferopol who writes for liberal Russian outlets such as Novaya Gazeta and maintains contacts with mainland Ukraine, described to me how daily life has changed in the year since the Western sanctions regime came into force. He can only fly to Russia. Credit cards like Visa are useless. No major banks are open. He cannot buy a pair of jeans or order from Amazon. Packages now take three weeks to arrive from Russia. He is unable to access Google Play—this, even though the United States announced in May that it was easing sanctions on Internet and software applications, which had hurt Internet gamers and Gmail users.

Sambros summed up the predicament of ordinary Crimeans succinctly: “Two million people have suddenly become traitors.” He said Ukraine still had “huge resources of loyalty in Crimea which it has not used.” Out of the two million people in Crimea, only 20,000 have renounced their Ukrainian citizenship, suggesting that most people want to keep their options open and maintain a relationship with both Ukraine and Russia.

But the overall effect is that locals now pin their hopes on Moscow and in particular on the planned construction of a 19-kilometer bridge across the Kerch Strait to Russia, which the Russian government says will be completed by 2019. “They are praying for the Kerch Bridge like to an idol,” Sambros said.

If Western sanctions are a major inconvenience for Crimeans, then the severing of contacts with mainland Ukraine is fundamental to their everyday lives. Rail and bus communications with mainland Ukraine have been cut off. The main source of water for the peninsula, the Northern Crimean Canal, is closed, depriving farmers of irrigation for their fields. Power transmissions from Ukraine are intermittent and there were widespread blackouts over the New Year holiday.

New regulations are deterring Crimean students from studying in Ukrainian colleges: they require the graduates to convert their Crimean high-school diplomas into regular Ukrainian diplomas before they are allowed to do so.

These punitive tactics towards a breakaway province are reminiscent of the methods applied by successive governments in Georgia towards their separatist territories of Abkhazia and South Ossetia. After the 2008 war with Russia, Mikheil Saakashvili, then the Georgian president, instituted a law on “occupied territories,” which severely restricted contacts with the two regions and put the onus on Russia to “de-occupy” the two regions,

It is probably no coincidence that the term “occupation” has become prominent in Ukrainian public discourse just as there are former senior Georgian officials, including Saakashvili himself, serving in the new Ukrainian government. However, that tactic has failed in Georgia, only pushing Abkhazia and South Ossetia deeper into Russia’s embrace.

Abkhazia suffered years of economic misery but now has few connections with Georgia and has undergone a slow integration into the Russian economy. In South Ossetia in 2008, the Saakashvili government cut the gas supply to the Georgian-majority town of Akhalgori, condemning it to several freezing winters and evoking South Ossetian complaints about Georgian cruelty. The post-Saakashvili government elected in 2012 offered to restore gas flows, only to be told that it was no longer needed because the Russians were building a new gas pipeline instead.

Crimea is, of course, much larger than either Abkhazia or South Ossetia and a much bigger drain on the Russian economy. But it is also a more significant political priority for President Putin. The example of the Caucasus suggests that the next few years will be crucial: if the Russians can develop new water sources for Crimea and eventually build a bridge to the peninsula, Ukraine will loses its current economic leverage and the annexation will be more of a fait accompli.

The Ukrainian government faces a big dilemma in Crimea—how to deal with a territory summarily swallowed up by its bigger neighbor, along with hundreds of assets and properties. So far Kyiv has gone down the path of complete isolation. Trade is still flowing with Crimea, which benefits both farmers and businessmen in southern Ukraine, as well as Crimean consumers. It amounted to more than $500 million between September 2014 and February 2015.

Even this trade is now the target of some nationalist Ukrainian politicians. A draft law proposes a total blockade, which bans all trade with “the occupied regions” of Crimea, Donetsk, and Luhansk. One of the initiators of the bill, parliamentary deputy Sergei Vysotsky, said he has no humanitarian concerns about this. Asked about Crimea, he told an interviewer that “In the course of a year, every [Ukrainian] patriot could have left there.”

But why should they want to leave home? The siege of Crimea is especially painful for Crimean Tatars, who have been indigenous to the peninsula for many centuries and owe more loyalty to Ukraine than to Russia. This unfortunate community is now facing political persecution from Moscow [sic] and isolation from Kyiv.

One Crimean Tatar, now a resident of Kyiv, told me he saw no strategy for winning his homeland back for Ukraine. “We are losing Crimea because of this policy,” he said.

Thomas De Waal is a senior associate in the Russia and Eurasia Program at the Carnegie Endowment for International Peace.