The situation with the Venezuelan Embassy in Washington D.C. – Press Conference (15 May 2019) 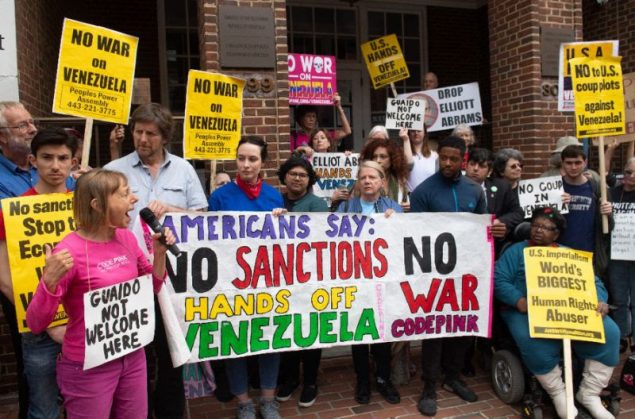 Medea Benjamin and other members of the Embassy Protection Collective outside the Venezuelan Embassy in Washington D.C. (Code Pink)

Venezuelan Ambassador Samuel Moncada holds a press conference — during which he is joined by Tighe Barry, a Code Pink activist — both of whom are concerned by what could happen as a result of this illegal act. Barry concludes that “there could possibly be a war over an embassy.”

Venezuelan Ambassador Samuel Moncada reported that US authorities “tried to forcibly evict” a group of individuals who were “peacefully” occupying the Venezuelan Embassy in Washington DC. Moncada told reporters in New York that the activist group, Code Pink, was inside the embassy “with the full authorization of our government in order to prevent the illegal assault of the premises by violent groups, supporters of the coup d’état that took place last April the 30th in Venezuela.” The Venezuelan Ambassador said his country has not “been at war with anyone for the past 200 years” while the United States “in the past 200 years has only had 16 years without wars.” He said, “do we want a war with the United States? Crazy. It makes no sense. But these people I do believe are power-mad and they are driving Latin America as a whole – because this will be a continent-wide problem – to a situation that has never before been seen.” Tighe Barry, a Code Pink activist, said, “there could possibly be a war over an embassy. If the embassy in Washington DC is taken; what says that the embassy in Venezuela, the American Embassy in Venezuela can’t be taken? Which sets a pretext for war.” According to news reports, law enforcement on Monday (13 May) started a process to remove protesters from the embassy.