Caitlin Johnstone continues with her acute observations of the developments in the Assange case.

Ever since suspicions were confirmed that the Trump administration is indeed working to prosecute and imprison WikiLeaks founder Julian Assange for publishing authentic documents, the so-called “Resistance” has been struggling to explain exactly why it is so enthusiastically supportive of that agenda. And when I say struggling, I am being very, very generous.

When news broke that a court document copy-paste error had inadvertently exposed the fact that the Trump administration is pursuing an agenda which experts of diverse political persuasions agreewould have devastating effects on the freedom of the press, #Resistance pundit and DC think tank operative Neera Tanden responded by tweeting, “Never mess with karma”. As of this writing if you do a Twitter search for the words “Assange” and “karma” together, you will come up with countless Democratic Party loyalists using that concept to justify their support for a Trump administration assault on the press that is infinitely more dangerous than the president being mean to Jim Acosta.

The trouble with that of course is that “karma”, as far as observable reality is concerned, is not an actual thing. It’s a Hindu religious concept that is supported by no more factual evidence than the Roman Catholic claim that a priest literally turns bread and wine into the body and blood of a Nazarene carpenter who died thousands of years ago. A Democratic pundit using the concept of “karma” to justify enthusiastic support for Trump’s fascistic attack on press freedoms is exactly the same as a Republican pundit using “God wills it” to justify the existence of poverty, and it is just as intellectually honest.

But it’s also the best argument these people have got. 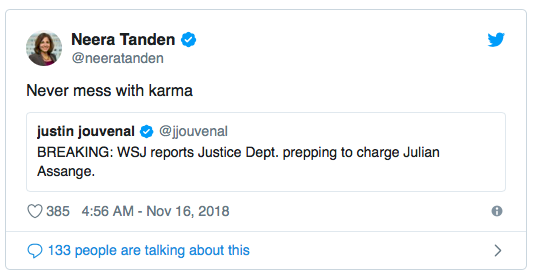 I mean, think about it. There’s really no other way you can justify supporting a Trump administration agenda–an administration you claim to oppose–in a prosecution with legal implications that are severely detrimental to the free press, which you claim to support. The only way to justify it is with some vague, abstract notion that Assange is just “getting what he deserves” since the 2016 WikiLeaks publications of Democratic Party likely contributed to Trump’s electoral victory over Hillary Clinton, and the only way to reify that vague, abstract notion is with an appeal to some imaginary metaphysical principle, i.e. karma.

But, again, that is not a thing. There is no invisible eight-armed deity floating around behind the scenes arbitrating and distributing the consequences of WikiLeaks drops, and there is no rational argument that the Trump administration prosecuting Assange is desirable because Assange “deserves” it. The fact of the matter is that these people are supporting Trump’s fascism in the most toxic ways possible, they are utterly incapable of defending that support with any intellectual honesty, and the self-proclaimed “Resistance” would be more aptly named “the Assistance”.

But the grand irony is that many Democrats will side with the Trump DOJ over the Obama DOJ. Their emotional, personal contempt for Assange – due to their belief that he helped defeat Hillary Clinton: the gravest crime – easily outweighs any concerns about the threats posed to press freedoms by the Trump administration’s attempts to criminalize the publication of documents.

This reflects the broader irony of the Trump era for Democrats. While they claim out of one side of their mouth to find the Trump administration’s authoritarianism and press freedom attacks so repellent, they use the other side of their mouth to parrot the authoritarian mentality of Jeff Sessions and Mike Pompeo that anyone who published documents harmful to Hillary or which have been deemed “classified” by the U.S. Government ought to go to prison.

…It is this utterly craven and authoritarian mentality that is about to put Democrats of all sorts in bed with the most extremist and dangerous of the Trump faction as they unite to create precedents under which the publication of information – long held sacrosanct by anyone caring about press freedoms – can now be legally punished. 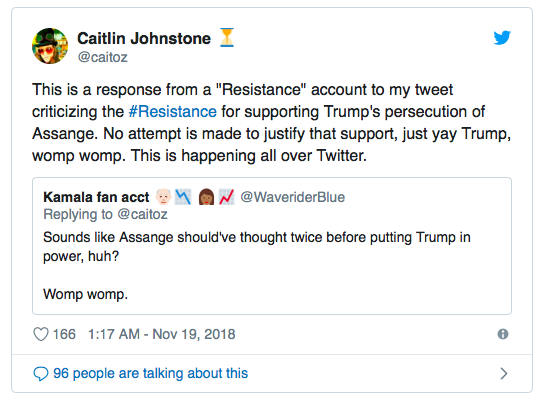 And indeed this is exactly what has been happening. Check out the joyous celebrations in online comments sections from when the news broke that the Trump administration has brought sealed charges upon Assange (here, here, or here for example) for a taste of where the “blue wave” zeitgeist is at right now. Their hatred for Assange has overpowered not only their hatred for Trump, but the most important ways in which they are meant to be resisting him.

When you find yourself supporting conflicting principles, it’s a sure sign that you were never guided by principle to begin with.

And this is really the lesson we can take from all this. The noxious strain of American liberalism which promotes Russia conspiracy theories, supports the prosecution of government transparency advocates, and only attacks Trump as an idea rather than actually resisting his actual policies was never about any principle of any kind. There were preexisting agendas against Russia, alternative media, WikiLeaks, and government transparency long before Trump took office, and all of those agendas have been systematically advanced by the powerful using the “us vs them” herd mentality of the McResistance. These people aren’t supporting the prosecution of a leak publisher because of their ideological values, they are supporting it because that’s what powerful manipulators want them to do.

Trump’s despicable prosecution of Assange, and corporate liberalism’s full-throated support for it, has fully discredited all of mainstream US politics on both sides of the aisle. Nobody in that hot mess stands for anything. If you’re still looking to Trump or the Democrats to protect you from the rising tide of fascism, the time to make your exit is now.