The prophecy of Túpac Katari 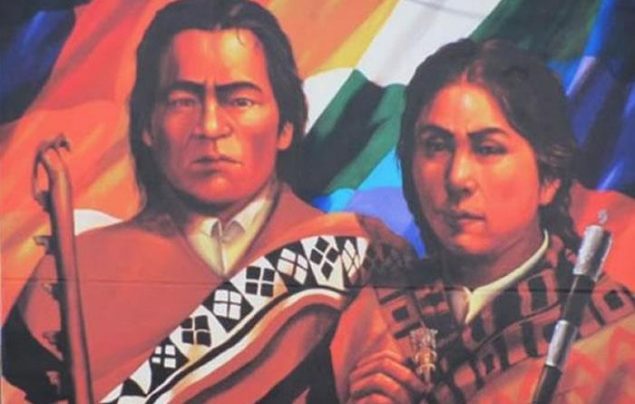 Aymara leader Túpac Katari formed an army of around forty thousand men to confront the colonialist forces of Spain and surround the city of La Paz in 1781.

Aymara leader, Túpac Katari, formed an army of about forty thousand men to confront the colonialist forces of Spain and surrounded the city of La Paz Bolivia in 1781.

Aymara leader Túpac Katari formed an army of about forty thousand men to confront the colonialist forces of Spain and came to encircle the city of La Paz Bolivia in 1781. In November of the same year, betrayed by some of his followers, he was captured by the Spaniards.

A judge condemned him to be “dismembered” with the same barbaric method used to execute Túpac Amaru II, that is to say, four horses would pull him by his extremities until he was torn asunder.

The sentence established that; “Neither to the King nor to the State should there remain neither seed or race of this Tupac Amaru or Tupac Katari because of the reverence that this cursed name has made in the natives… Because, otherwise, there would remain a perpetual ferment in them.”

Today the coup d’état against President Evo Morales was finally consummated. A very painful and bitter day for Our America. The plan to ignore Evo’s foreseeable victory and destabilize the country began to be prepared long before the elections and had the early sponsorship of the Empire. Pompeo already congratulated the OAS for its complicity with the coup plotters. Fascism is already celebrating its victory in Bolivia as it continues to persecute government officials, members of the Supreme Electoral Tribunal, MAS supporters, and leaders of indigenous and popular movements, or ethnically “suspicious” men and women.

Paradoxically, one of the most notorious coup plotters presents himself as a kind of Messiah and uses the Bible and the figures of Christ and the Virgin to call for hatred, racism and violence. This is not new: the electoral campaign of the Fascist-Messianic Bolsonaro received decisive support from reactionary evangelical churches.

Another paradox is that the oligarchy has hired killers, “guarimberos” and paramilitaries from sectors that benefited from Evo’s social policies. Once again we are presented with the sad spectacle of the “poor right-wing” (in this case “ultra-right”) who is deceived by the media and current discourses. People who should be grateful to Evo become pawns of cheap Hitlers.

Commander Chávez liked to repeat the prophecy that (with different variants) is attributed to Túpac Katari when he was condemned to death more than two hundred years ago: “You can kill me, but I’ll come back made of millions.” It was an indirect response to his judge, who, as we saw, hoped that Katari would not leave any mark on the face of the earth.

Evo, Aymara like Katari, with his nobility and ethical sense in every way, with his generous dedication to the people, with the extraordinary results of his work, is leaving “a perpetual ferment” in Bolivia, in Our America, in the people worthy of this world. And he will surely return “made of millions”.