The problem with Ukrainian police reform

Ukraine’s police are getting a much-praised makeover. But there could be trouble down the road.

Over the past year, thousands of newly recruited police officers have taken to the streets of Kiev, Odessa, Lviv, and other cities across Ukraine. In contrast to their predecessors in the old, post-Soviet militsia, these newcomers are polite, well-trained, and physically fit. Perhaps most importantly, they refuse to take bribes. 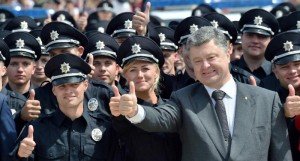 Many of the new recruits sympathized with the 2013-2014 Euromaidan demonstrations that overthrew the corrupt political order of former President Yanukovych, and they are genuinely interested in building a new, more democratic Ukraine. Over a quarter of the new police force consists of women — one of the highest rates in the world. The new units enjoy high approval ratings in Kiev and are regarded as a symbol of a “civil” state.

International experts are thrilled, too. They tout the new patrol police as one of the brightest rays of hope in post-Euromaidan Ukraine. It’s been described as a “force for change” and even the “cops who would save a country.” It’s no wonder the foreigners are happy — much of the new police reform has been funded through the U.S. State Department’s Bureau of International Narcotics and Law Enforcement (INL), with additional help from Canada and Japan. 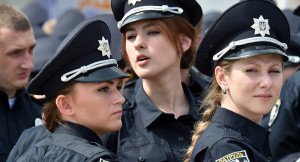 So far, so good. But this apparent success masks some important shortcomings that could undermine it in the months and years ahead.

The police reform process has been opaque and top-down, led by a few powerful officials with little input from civil society. As a result, the international donors who have partnered with the Interior Ministry risk repeating a problem that has plagued similar efforts to clean up law enforcement in other parts of the world. All too often, donors tend to give their help to corrupt and autocratic political elites still mired in militarized and secretive systems.

What such an approach tends to miss is that the police aren’t responsible only to people at the top. Police forces should also answer to the people they serve. For this reason, successful police reform depends on forging a consensus between the state and society on how and when the state may employ violence: consider, for example, the ongoing discussion in the United States on the relationship between the police and African-American communities. That debate is taking place in the wider democratic context of free media, frequent and fair elections, and impartial courts.

But Ukraine and other countries with a long history of authoritarianism lack such venues for an effective state-society dialogue. As in other post-Soviet states, Ukraine’s Interior Ministry (which oversees the police) was designed to support government policies, to punish dissent, and to demonstrate the government’s reach across the country. Despite several rounds of competitive elections, a diverse civil society, and numerous media outlets, Ukrainian officials continued to use the police to coerce the opposition right up until the Euromaidan uprising. International donors looking for quick results risk inadvertently supporting, or even strengthening, the state’s punitive apparatus, without ensuring more active participation of the citizenry in overseeing the police.

To date, Ukraine’s new police have been focused on a myriad of petty matters: smoking in public places, homeless people sleeping in tourist areas and cars parking around bus stops. But the new policing model in Ukrainian cities does not explain how bigger and more violent crimes are prevented through policing small things. Meanwhile, top-level police offers, accustomed to deploying excessive force against peaceful demonstrations or operating criminal syndicates, remain unchallenged and unreformed. And while a shiny new police force might challenge small-scale corruption, there has still been no serious anti-corruption drive from the top.

Even more worrisome are the Interior Ministry’s plans to organize a new SWAT force supported by the U.S. Drug Enforcement Administration, the Border Patrol, and the State Department’s Bureau for Narcotics and Law Enforcement. In a repeat of the patrol police project, only a closed circle of ministry officials and U.S. donors are involved in designing the new force, which is supposed to replace former special operations police forces such as “Berkut,” infamous for its deadly violence against Euromaidan demonstrators.[1] Activists worry that adopting the U.S. model for a militarized police force will allow Ukraine’s leaders to use brutal force against anti-government demonstrations in the future. A better fit might be found in neighboring Poland and the Czech Republic, where military police units are assigned exclusively to the armed forces or to carry out counterterrorism missions.

Since the ouster of Yanukovych, Ukraine has experienced an inflow of former government officials from Georgia, including former president Mikheil Saakashvili. Inspired by the reforms they carried out at home, these officials have sought to export their experience to Ukraine. The Georgian police reform eradicated petty corruption and gained international praise for its dramatic break with a repressive past.

Yet Saakashvili’s reform also transformed the Interior Ministry into the single strongest government body, one amply equipped to spy on the political opposition. Unfortunately, the methods used to direct top-down reform in Saakashvili’s Georgia are now being replicated in post-Euromaidan Ukraine. Only a narrow group of people are interacting with the external donors and making key decisions. Civil society activists are only invited to oversee procedures already in place, as opposed to generating ideas for the reform’s direction. The vision of change is transmitted directly from the deputy-minister level to specific projects on the ground, bypassing public discussion.

The only exception to this pattern of top-down reform occurred earlier this year, when civil society activists were allowed to influence the drafting of the new police law adopted in July 2015. The activists succeeded in redefining the police as an agency that “serves society by ensuring protection of rights and freedoms,” ordering the police to report instances of human rights abuse, and requiring the police to carry identification badges. Because of this substantial public input, the drafting the new law was a textbook example of a genuine police reform process. That’s a good sign for the future. But so far there’s little evidence that the authorities have learned from this example.

Though they often disagree among themselves about the course of the police reform, activists are united in their push for three major changes. First, they insist that the head of the police, designed as a professional, non-political post, should be recruited on a competitive basis, not appointed by the Minister of the Interior. Second, the deputies of local police chiefs should also be selected through fair competition. Both demands aim to break the long tradition of police units that owe their loyalty to respective governments rather than the public.

Third, there has so far been no discussion at all on the future of the Security Service of Ukraine (SBU), a key component of the internal security apparatus. The SBU’s surveillance reach inside the country is vast, and before the Euromaidan revolution, the government routinely used it to suppress political opponents. In Georgia, the powerful, unreformed intelligence agency became a highly controversial issue in the 2012 parliamentary elections, which dealt a severe blow to Saakashvili’s regime.

The Ukrainian and Georgian experiences with police reform reflect larger trends in the ex-Soviet Union and in other countries emerging from authoritarian rule. International efforts typically provide police with new uniforms, refurbish police stations, and train officials. Programs focus mostly on institutional objectives and formal legal structures; only a small fraction of funds goes to civil society groups who promote the rule of law.

Donors usually operate under the assumption that reformed police forces will, thanks to greater professionalism, assume a neutral role in the political landscape, thus safeguarding the democratization process. So far, however, there is little evidence that this is happening in the former USSR. Despite years of donor assistance in Moldova, Armenia, Georgia, Kyrgyzstan, and Tajikistan, the police in these countries still arbitrarily arrest political opponents during elections, curtail the work of the mass media, and brutally suppress anti-governmental mass protests. In worst-case scenarios, the police use skills acquired through donor training projects to carry out the political decisions of the incumbent elites.

Instead of cosmetic upgrades, donors must concentrate on promoting collaboration between the state and society. To be sure, a top-down process is likely to get results much more quickly than one involving the participation of civil society. Yet it is only through the latter that a post-Soviet police force can be transformed into one appropriate for the needs of a democratic society.

Note by New Cold War.org editor:
[1] The author is perhaps referring to the alleged killings of demonstrators in February 2014 by snipers of the ‘Berkut’ special police of the government of President Victor Yanukovych. This claim has been discredited by extensive evidence and reporting which is compiled here New Cold War.org website. Snipers firing from buildings controlled by the extreme-right forces of the ‘Maidan’ protest movement killed dozens of demonstrators AND police in the days leading up to the violent overthrow of the Yanukovych government.

Read the comments posted to the above article in Foreign Policy, including this one, dated Dec 30, 2015:

Leading the reforms of police, justice and anti-corruption are Georgian expatriots who were only marginally successful reforming Georgia.  The new police force is, at present, purely cosmetic – for state security and anti-political protest forces are securely in the hands of those with far less responsibility to the public and far more to the current politicos.

Ukraine proper is currently  undergoing a series of large scale ‘anti-terrorist’ operations that have seen the round-up of numerous political opponents.

What we won’t see, as we haven’t yet, is any evidence of an operating judicial system.  Imprisonment on police (military or security) warrant is SOP in present-day Ukraine. ‘Flying lessons’ and ‘hunting accidents’  are not unusual parts of the ‘judicial process’.

* There is an page on the New Cold War.org website consisting of extensive reports by human rights agencies on the situation in Ukraine. Find it here. The listing includes:UN special rapporteur on torture issues sharply critical report on Ukraine, Sept 21, 2015

* Ukraine police reform: All fluff, no substance, Sputnik News, Jan 2, 2016 (this article on Sputkik is a summary review of the Foreign Policy article above)