The police were designed to take Black and Palestinian lives, not protect them 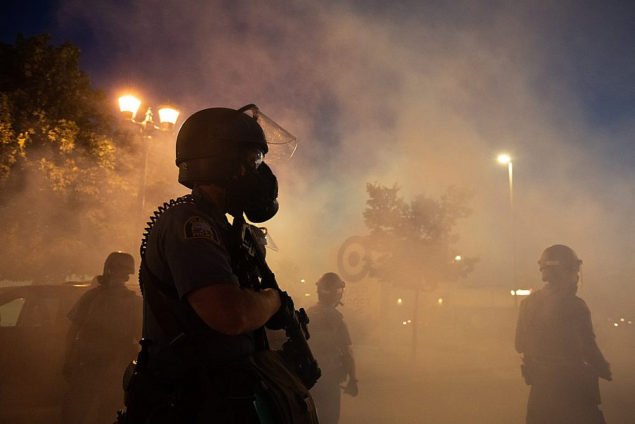 Police officers fire tear gas in St.Paul and Minneapolis during protests following the killing of George Floyd, May 28, 2020. (Hungryogrephotos/Wikimedia)

The knee that choked George Floyd is part of the same oppressive force that walked away from Ayman Safiah and that pulled the trigger on Iyad al-Hallaq.

It has been a week of shocking police misconduct in Israel-Palestine and the United States.

For Palestinians, the saga began on May 24 when Ayman Safiah, a gifted Palestinian dancer from Kufr Yassif in northern Israel, met his tragic death in the Mediterranean Sea near Atlit, where he drowned after saving a friend who was swept up by the violent waves.

Ayman’s friends, who were with him at the time, immediately called Israeli police to help find him. Yet it took three days to find Ayman’s body. Three days in which the Palestinian community in Haifa and the north had to mobilize to search for him, because the authorities showed little interest in doing so. A helicopter hung over the sea for a mere two hours during three days of searches, while officers on the beach issued fines to Palestinians for taking the search efforts into their own hands.

Soon after his disappearance, Ayman’s family and friends took to social media to express their outrage over the police’s frail attempts to find him. After growing pressure from the Palestinian community — which the mainstream Israeli media belatedly reported on days later — the police resumed their searches more thoroughly. Ayman’s body was eventually found last Tuesday.

Ayman’s death blatantly displays who does and does not matter in the eyes of Israeli law enforcement. A country that prides itself on its military capabilities, on its “heroic” missions and intelligence tactics, could not even dedicate 24 hours to intensively find somebody’s loved one. The answer, of course, is that they could — but not if the loved one is Palestinian.

After all, Israel’s police boats and military divers are not geared to help Palestinians like Ayman. They are used instead to enforce the blockade of the Gaza Strip while harassing Palestinian fishermen in its waters. The helicopter that looked for Ayman for a mere two hours was originally meant to locate Palestinians in the narrow streets of Issawiya in Jerusalem, in order to capture and throw them into prisons on dubious charges with no right to legal counsel. All these institutions — the navy, the police, and the justice system — were designed to take Palestinian lives, not protect them.

The violence of systemic racism is rooted in structures that are inherently built to exclude marginalized communities from public conversations, decision-making, resources, and access to justice. Even in the aftermath of Ayman’s drowning, if Palestinians were lucky enough to hear the mainstream media use the words “racism” or “discrimination” to describe the Israeli police’s negligence, it would always be diluted to an isolated incident, never as a widespread phenomenon.

Sadly, such violence did not end at the waters that took Ayman last week.

Last Monday, while Ayman’s family and friends were still searching for his body, George Floyd’s family in Minneapolis was informed that George had become the latest victim of lethal police brutality, after four police officers detained and choked him to death. A cellphone video was released showing George, an unarmed Black man, pleading for his life with the words that we had heard from Eric Garner in his final moments years before: “I can’t breathe.”

In Jaffa that same day, Israeli police assaulted two Palestinian LGBTQ activists after they filmed officers carrying out violent arrests of Sudanese asylum seekers for allegedly violating social distancing rules. The officers later detained the activists from their homes for interrogation, confiscating their phones and accusing them of making “antisemitic” comments against the officers.

Then, on Saturday morning, the mother of Iyad Hallak was informed that her Palestinian son, who was autistic, was shot dead by Israeli Border Police in Jerusalem’s Old City while on his way to the special needs school where he attended and worked. The police claimed Iyad had made “suspicious movements” and held what they thought was a weapon. According to an autopsy, they shot him twice in the chest. There was no weapon.

These acts of violence are not separate incidents. Nothing about the oppression of people of color, occupied and indigenous communities, women, refugees, queer folk, the working class, persons with disabilities, or even the environment, is unrelated.

Whether through negligence or brutality, police forces in both Israel-Palestine and the United States have proven time and again that they were never designed to protect people of color, but rather to protect white supremacy from people of color. Had the voices of Black and Brown people mattered, people like George and Iyad might still be breathing.

It is no coincidence that many of the militarized tactics used by U.S. police to oppress and kill Black people are, in fact, studied from and employed byIsraeli forces. They are the same chokeholds, arrest procedures, and crowd dispersal methods that we see in Palestinian streets and refugee camps every day, and which we saw replicated in Minneapolis and other cities this past week.

The language of systemic violence is also the same. If the protesters are white, Ashkenazi, and Jewish, they are “fine people” with understandable sentiments, even if they are armed and violent; they can go home safely when their demonstration is over. But when the protestors are people of color taking to the streets to fight for their lives, they are immediately labeled as “rioters;” there is no guarantee that they will return home unharmed.

We are not isolated

Unsurprisingly, it did not take long over the course of the week for the words “I can’t breathe” to quickly become the united slogan “We can’t breathe,” and for the hashtags #BlackLivesMatter and #FreePalestine to once again appear side by side on social media, just as they did during the Ferguson protests and the bombings of Gaza in 2014.

These oppressive structures have led us to believe that our battles exist in isolated vacuums, because only in a vacuum can these structures cut off the air to a joint struggle that seeks real intersectional justice. But as Audre Lorde said, there is no such thing as a single-issue struggle, because we do not live single-issue lives.

We must understand that the knee on George Floyd’s neck in Minneapolis is attached to the arm that choked the life out of Eric Garner in New York. It is attached to the finger that pulled the trigger on Razan al-Najjar in Gaza two years ago, and Iyad Hallak in Jerusalem on Saturday. It is attached to the foot that walked away from Ayman Safiah, rather than swiftly help and bring closure to his loved ones. It is attached to the hand that silences rape survivors, that confiscates homes, that signs fascistic laws, that occupies land, that holds back funding to healthcare, and that pumps poison into our environment, until all of us cannot breathe — just like Ayman, Eric, George, and Iyad.

These connections must be recognized if we want to even begin scratching the surface toward any form of justice. Until then: while that foot is off your neck, and while that hand is off your mouth, you must scream at the top of your lungs with every breath that Ayman, Eric, George, Iyad, and countless others no longer have. They deserved better. We all deserve better.