The Plot to Kill Venezuela 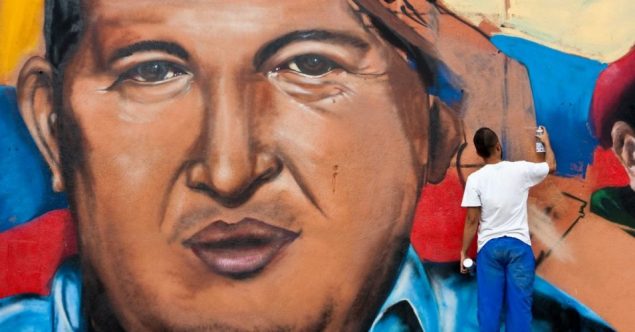 A mural of former Venezuela President Hugo Chavez (1954-2013). The U.S. government and the Venezuelan oligarchy first tried to overthrow Chavez and the Bolivarian Revolution in 2002. Nearly twenty years later, they are still at it. (Photo: Univision)

And who is caught between an economy reliant on oil revenues and a sanctions regime designed to create suffering? The people caught in the squeeze of factors beyond their control.

Hugo Chávez knew that Venezuela was very vulnerable. Its oil revenues account for 98 percent of its export earnings. Chávez was familiar with the thinking of Juan Pablo Pérez Alfonzo, Venezuela’s minister of mines and hydrocarbons in the early 1960s and one of the architects of OPEC (Organization of the Petroleum Exporting Countries). In 1976, Pérez Alfonzo wrote, “Ten years from now, twenty years from now, you will see, oil will bring us ruin.” He called Venezuela’s oil the “devil’s excrement.” If oil prices remained high, as they were when Chávez came to power in 1999, then oil revenue could be used to finance a project for the landless workers. If oil prices collapsed, then the country—laden with debt—would face severe challenges.

Venezuela’s economy had not been diversified by the oligarchy that ruled the country before Chávez took office. By 1929, it had become apparent to the oligarchy that the flood of oil revenues had damaged the agricultural sector—which shrank in the decades to come. There was neither an attempt to enhance agricultural production (and make Venezuela food sovereign) nor was there any attempt to use oil profits for a wider industrialization program. Occasionally, presidents—such as Carlos Andrés Pérez in the 1970s—would pledge to use the influx of oil revenues to diversify the economy, but when oil prices would fall—as they did periodically—Venezuela went into punishing debt.

In 2009, a U.S. State Department cable from Caracas noted that the decline in oil prices had placed the Venezuelan government in great peril. The government’s oil company—PDVSA—had provided the revenues to fund the social missions, the programs to lift the low standard of social life for the landless workers. “Unless oil prices rise significantly,” wrote John Caulfield from Caracas, “we are increasingly certain that the game will be up, from an economic standpoint, by early to mid 2010, as no one will be willing to continue to finance PDVSA and a vicious cycle will be inevitable.” The June 2008 price was $163.52; by January 2009, it had collapsed to $50.43. Venezuela’s Bolivarian Revolution was in peril.

The United States government and the Venezuelan oligarchy first tried to overthrow the Bolivarian Revolution in 2002. Great hope in Chávez prevented a discredited oligarchy from victory. Oil revenues then allowed Chávez to build up pillars of support for the revolution. But the depletion of the oil prices from 2009 threatened the Bolivarian process. Chávez died in 2013. The combination of low oil prices and the death of Chávez changed the political calculations.

Egged on by the United States, opposition leaders Leopoldo López and María Corina Machado called for demonstrations against the newly elected president Nicolás Maduro in 2014. It was clear that the protests were intended as a provocation, drawing a crackdown from the government forces, which allowed U.S. President Barack Obama to sign the Venezuela Defense of Human Rights and Civil Society Act of 2014. This act allowed Obama to sanction individuals in the Venezuelan government. It was extended in 2016 and will expire—unless extended again—at the end of 2019. The sanctions policy was to be the new lever to pressure a vulnerable Venezuela.

In March 2015, Obama declared Venezuela a “threat” to U.S. “national security,” an extreme step, and sanctioned a handful of Venezuelan government officials. The administration of Donald Trump only sharpened and deepened the policy. Obama sanctioned seven individuals, while Trump has—thus far—sanctioned 75 individuals. Obama forged the spear; Trump has thrown it at the heart of Venezuela.

These early sanctions went after individuals, offering an inconvenience for some Venezuelan politicians and for sections of the state. The U.S. government would soon move the sanctions from individual inconvenience to social collapse. Trump’s policy, from 2017, was to hit Venezuela’s petroleum industry very hard. The U.S. government prevented Venezuelan government bonds from trading in U.S. financial markets, and then it prevented the state’s energy company—PDVSA—from receiving payments for its export of petroleum products. The U.S. Treasury Department froze $7 billion in PDVSA assets, and it did not allow U.S. firms to export naphtha into Venezuela (a crucial input for the extraction of heavy crude oil).

The country relied on oil revenues to import food and medicines. The theft of the $7 billion in PDVSA assets, the seizure of the $1.2 billion in Venezuelan gold in the Bank of England, the transfer of ownership of the PDVSA subsidiary CITGO in the United States to the opposition and the pressure on oil exports squeezed Venezuela very hard. U.S. National Security Adviser John Bolton estimated that the United States (and Canadian) sanctions had cost Venezuela about $11 billion.

When the United States began to put pressure on transportation firms to stop carrying Venezuelan oil, the schemes to export oil to the Caribbean (PetroCaribe) suffered, as did the fraternal delivery of oil to Cuba. This policy inflamed the situation in Haiti—which is in a long-term political crisis—and it has deepened the crisis in Cuba—which has now had to enforce rationing. The countries in the Caribbean, which relied upon Venezuelan oil, are now suffering deeply.

Impact of the Sanctions

Economists Mark Weisbrot and Jeffrey Sachs calculate that the U.S. sanctions have resulted in the death of 40,000 Venezuelan civilians between 2017 and 2018. In their report—“Economic Sanctions as Collective Punishment: The Case of Venezuela” (April 2019)—they point out that this death toll is merely the start of what is to come. An additional 300,000 Venezuelans are at risk “because of lack of access to medicines or treatment,” including 80,000 “with HIV who have not had antiretroviral treatment since 2017.” There are 4 million people with diabetes and hypertension, most of whom cannot access insulin or cardiovascular medicine. “These numbers,” they write, “by themselves virtually guarantee that the current sanctions, which are much more severe than those implemented before this year, are a death sentence for tens of thousands of Venezuelans.” If oil revenues drop by 67 percent in 2019—as has been projected—the death of tens of thousands of Venezuelans is guaranteed.

Venezuela has imported food goods worth only $2.46 billion in 2018 compared to $11.2 billion in 2013. If food imports remain low and Venezuela is unable to hastily grow enough food, then—as Weisbrot and Sachs argue—the situation will contribute to “malnutrition and stunting in children.”

In 2018, the UN High Commissioner for Human Rights—Michelle Bachelet—made the case that the cause of the deterioration of well-being in Venezuela predates the sanctions (a report from Human Rights Watch and Johns Hopkins University underlined this point). It is certainly true that the fall of oil prices had a marked impact on Venezuela’s external revenues and the reliance upon food imports—a century-old problem—had marked the country before Trump’s very harsh sanctions.

But, the next year, Bachelet told the UN Security Council that “although this pervasive and devastating economic and social crisis began before the imposition of the first economic sanctions in 2017, I am concerned that the recent sanctions on financial transfers related to the sale of Venezuelan oil within the United States may contribute to aggravating the economic crisis, with possible repercussions on people’s basic rights and wellbeing.” A debate over whether it is mismanagement and corruption by the Maduro government or the sanctions that are the author of the crisis is largely irrelevant. The point is that a combination of the reliance on oil revenues and the sanctions policy has crushed the policy space for any stability in the country.

Weisbrot and Sachs say that these sanctions “would fit the definition of collective punishment,” as laid out in the Hague Convention (1899) and in the Fourth Geneva Convention (1949). The United States is a signatory of both of these frameworks. “Collective penalties,” says the Fourth Geneva Convention, “are prohibited.” Tens of thousands of Venezuelans are dead. Tens of thousands more are under threat of death. Yet, no one has stood up against the grave breach of the convention in terms of collective punishment. There is not a whiff of interest in the UN Secretary General’s office to open a tribunal on the accusations of collective punishment against Venezuela. Allegations of this seriousness are brushed under the rug.