The new scramble for Africa 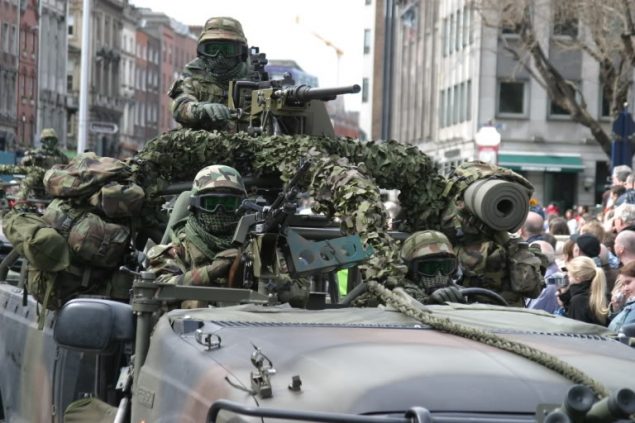 The Irish parliament – the Dáil – has voted to send troops to Mali, a country not only plagued by terrorism but also by centuries of imperialism.

Failing to see the irony, the Government and Fianna Fáil voted—on World Refugee Day, of all days!—to send fourteen members of the army’s Ranger Wing (Ireland’s SAS) to war in Mali.

The minister for defence, Paul Kehoe, told the Dáil that the country was a victim of “terrorism,” and we must play our part.

The nineteenth-century scramble for Africa by the “great powers” carved up that continent into artificial states and spheres of influence, causing drastic divisions and consequences for tribal peoples that have been compounded by impoverishment and discrimination.

Mali is the tenth-poorest country in the world; but the Tuareg people in northern Mali, thanks to government discrimination, are even poorer. In neighbouring Niger their tribal folk’s fate is similar: super-exploited in the uranium mines, a vital source of France’s nuclear energy programme. This was the main reason why France sent a significant military force to Mali when the discontent burst into rebellion.

This uprising was exacerbated by the West’s overthrow of Gadaffi’s Libya in 2011. Well-armed Libyan Tuareg soldiers fled from the insurgency in Libya and joined forces with their brethren in Mali. A year later these rebels were to be superseded by a more powerful jihadi force.

In February 2013 the French intervened, and by 2015 a peace agreement with Tuareg forces had been agreed. France also engineered the military support of the “G5 Sahel,” five former colonies in the Sahel-Saharan region: Burkina Faso, Mali, Niger, Mauritania, and Chad. An estimated 18,000 foreign troops are in Mali today.

The intervention in Mali is showing clear similarities to the Afghan war. It was possible to wrest northern Mali from the control of jihadi militias, as it was to temporarily put an end to Taliban control in 2001. Nevertheless intervention forces—the United Nations Multidimensional Integrated Stabilisation Mission in Mali—which include a large German contingent as well as the French “anti-terrorist” Opération Barkhane force—are regularly under attack.

Also, serious acts of violence are happening in central Mali. Here the Puelh, mostly shepherds, have constantly suffered state oppression. A growing number of the Puelh have risen up against the discrimination and as a result have been the victims of massacres.

A United Nations report in 2018 accused Malian troops of having committed regular massacres; and since late 2016 these forces have allegedly carried out “extrajudicial killings,” arbitrary arrests, torture, and the enforced disappearance of men accused of supporting Islamist armed militias. These are the very same soldiers who are being trained under an EU training mission, which includes Irish, British and German military trainers.

None of this information was forthcoming in the Dáil. Instead the minister hypocritically spoke of Mali needing to return to “civilian rule,” ignoring the fact that the forces that Irish soldiers have been training since 2013 are the very ones that overthrew the democratically elected president in 2012.

It is within this bellicose maelstrom that the Irish special forces will join the German army contingent to carry out “reconnaissance” missions, presumably targeting villages or specific areas for drone attacks. That is not peacekeeping, that is war, and a blatant breach of our neutrality.

Besides, this war is unlikely to succeed. In November 2017 the International Crisis Group, a pro-western think tank, stated that this regional conflict can be solved only if the deep-seated socio-economic causes are dealt with. And while the Malian people are poor, their country and region are rich in natural resources.

However, a military strategy is the preferred EU option, and especially for Germany, as it expands its operations in Africa. This dovetails nicely with the EU’s “permanent structured co-operation” (PESCO) and the development of an EU army.

You can rest assured that our political and military elite won’t allow a trivial matter such as Irish neutrality to get in the way of rubbing shoulders with their betters.