The military’s role in a contested election 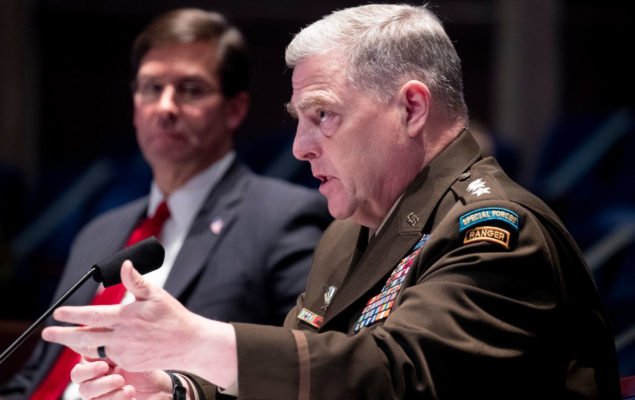 Chairman of the Joint Chiefs of Staff Gen. Mark Milley (R) and US Secretary of Defense Mark Esper testify before the US House Armed Services Committee. (Michael Reynolds / Getty Images)

Asking the armed forces to decide who won would be the first step on the road to rule by military junta.

There are at least two ways that the outcome of this November’s presidential election could threaten the existing political order. Both risk drawing the armed forces of the United States into partisan politics, with the Constitution itself thereby put in jeopardy. Americans are long accustomed to assuming that the US military is indelibly and irreversibly apolitical. Events in the coming months may well test that assumption.

Scenario No. 1 has lately been garnering more than occasional press attention: Biden wins, but Trump refuses to accept the outcome. He denounces the election as rigged and vows to retain control of the White House. Citing the Second Amendment, Trump might then mobilize his many millions of followers as a “National Militia” committed to preserving law and order (and therefore his hold on the presidency) until an honest election can be organized, however long that may take.

But scenario No. 2 is hardly less problematic: Trump wins, but anti-Trumpers, including the vast majority of the nation’s media, intellectual, and cultural elite, refuse to accept the outcome. Unable to abide four more years of being governed by a corrupt, incompetent, pathologically dishonest narcissist, they could well declare his presidency illegitimate and demand his removal. The “Resistance” inspired by his ascent to high office in 2016 revives with a vengeance. Antifa transitions from a fringe group to a mass movement intent on ousting a manifestly fascist regime, using whatever means are necessary.

Ten or 20 years ago, even as the basis for a Hollywood script, neither scenario would have seemed plausible. Given the multiple traumas that Americans have endured in 2020, that is no longer the case. While the likelihood of either scenario (or some related variant) actually coming to pass is difficult to calculate, it is not zero. Should the final tally of votes be tainted by ambiguity—ballots lost or miscounted perhaps, or new evidence of foreign interference—it could be considerably greater than zero.

The two suggested scenarios are alike in this sense: In each, a contested presidential election holds the potential of triggering the collapse of domestic order. Unrest simultaneously affecting dozens of cities on a scale dwarfing recent protests in Portland, Ore., is not inconceivable. Should state and local police agencies prove unable to cope, proponents of order intent on restoring some semblance of stability will argue for deploying US troops. But any such action will carry with it political implications of profound importance.

In scenario No. 1, the left will call for troops to disperse Trumpian militias obstructing Biden’s rightful assumption of the presidency. In scenario No. 2, the right will cite the need for troops to crush an emboldened Resistance and thereby preserve Trump’s rightful claim to reelection. In either instance, it will fall to the military to uphold the “correct” outcome of the November 2020 election.

The military itself—meaning a small cadre of very senior Pentagon officials, both uniformed and civilian—will thereby render a definitive judgment on the proper meaning of “correct.” As was the case with the Supreme Court in the contested presidential election of 2000, duty will require them to choose sides. In so doing, they will unavoidably set a precedent. To the extent that their choosing determines who will inhabit the Oval Office as of January 20, 2021, the US military will willy-nilly assume a role as ultimate political arbiter. An institution that has struggled mightily to influence who should govern in Kabul or Baghdad will find itself deciding who should govern at home. Down that path lies rule by a military junta.

To emphasize: This is not a role that Pentagon leaders will seek. Should the election produce a contested outcome, they will want the courts and Congress to settle matters expeditiously in accordance with the rule of law. The generals and admirals who preside over the military have a strong institutional interest in preserving the status of the armed forces as an institution commanding broad respect. After all, military juntas tend to have a limited lifespan. But the unique circumstances of the present political moment may put normalcy out of reach.

Whether the armed forces can avoid being dragged into a hyper-partisan dispute stemming from the election will depend in large measure on the character and political judgment of two individuals: Secretary of Defense Mark Esper and Joint Chiefs of Staff Chairman Gen. Mark Milley. During the potentially turbulent and contentious weeks that may follow November 3, both will remain at their posts, even if in Esper’s case possibly as a lame duck.

I take it as given that Esper and Milley are well-intentioned patriots. Yet neither one inspires confidence. Esper graduated from West Point (“Duty, Honor, Country”) and served briefly in the Army. Yet he has spent the preponderance of his professional career as a well-paid functionary within the upper reaches of the military-industrial complex. The values that prevail there differ from those taught at West Point.

Milley is a career army officer, largely unknown to the public until he accompanied Trump on the president’s infamous trek across Lafayette Park to pose with a copy of the Bible. Esper is a Trump loyalist. Whether intentionally or not, Milley has created the impression that he too is in Trump’s pocket.

Future historians are unlikely to confuse either of them with George C. Marshall, who during the Korean War held Esper’s post as defense secretary and throughout World War II served as army chief of staff. Marshall stands in relation to the military profession as Jesus Christ does to Christianity. In the weeks to come, which may find them tested as never before, Esper and Milley would do well to keep in mind the acronym WWMD: “What Would Marshall Do?”

The proper answer to that question will necessarily depend on the specifics of the case. But on one point Marshall was unbending: His ultimate loyalty was to the Constitution, not to any person or party. The oath that he had sworn to preserve and protect the Constitution took precedence over all other considerations. In the treacherous times just ahead, Esper and Milley may be called upon to emulate Marshall’s example. Persons of good will, regardless of their partisan affinities, must hope that they will both be mindful of where their ultimate loyalty must lie. A lot may be riding on their performance of their duties.

Andrew J. Bacevich is president of the Quincy Institute for Responsible Statecraft.