The media, Venezuela, and hunger statistics: A case study in careless reporting

Note by New Cold War.org editor:
A spate of press reports, including the Independent (UK), CNN, the New York Times and the left media site Jacobin, have carried wildly exaggerated statements about undernourishment in Venezuela, such as the notorious claim that Venezuelans have ‘dropp[ed] an average of 19 pounds’ in the past year and “Almost 90 per cent of the population cannot buy enough food”.

There is no doubt that Venezuela now faces serious economic difficulties especially since 2014, with the collapse of the world price of oil, and that these have been greatly worsened by the recent sanctions imposed by Canadian and US governments (see the petition at www.nosanctions.org). This contrasts with the achievements of the previous 13 years during which the standard of living of poor Venezuelans was raised to a degree unseen in Latin America. Poverty fell from 70.8% to 21% from 1996 to 21% in 2010 and extreme poverty from 40% to 7.3% whilst Venezuela’s Gini coefficient was by 2014 the lowest in the region.

Nevertheless the current situation is serious, as the government acknowledges, and is the subject both of a deep debate on economic policy in Venezuela, and of a series of new measures, to alleviate the effects of the economic shortages that are the immediate cause of the recent rise in undernourishment.

Neither the Venezuelan people, nor the evolution of an adequate policy, are helped by the systematic misreporting on which the recent claims are based. Jacob Wilson sets the record straight in the following report.

The media, Venezuela, and hunger statistics: A case study in careless reporting 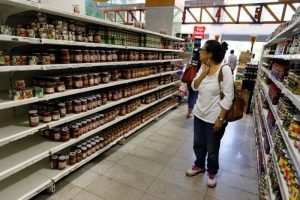 Two weeks ago, the Food and Agriculture Organization of the United Nations (FAO) released a report on food insecurity and nutrition in Latin America and the Caribbean. The report highlighted a regional increase in food insecurity, a first since the agency started collecting annual data for the Millennium Development Goals in 2000. The authors noted that the food crisis in Venezuela was central to this increase. While the percentage of the population in Venezuela experiencing undernourishment was lower than several other countries in the region ― such as Bolivia, Guatemala, Haiti, and Honduras ― in the last three years, Venezuela contributed an estimated 1.3 million newly food-insecure people to Latin America’s total.

The FAO study confirms that the Bolivarian Republic is facing a growing hunger crisis that requires action. For the past year and a half, the media have decried the Venezuelan government for its management of the crisis, but the figures they have cited do not match the FAO’s. Over the past 18 months, it has become accepted fact that the crisis is even worse than the FAO describes: some “93 percent of the [Venezuelan] population cannot afford food,” and Venezuelans “in the past year dropp[ed] an average of 19 pounds.” (In addition, a Jacobin article states: “Almost 90 percent of the population cannot buy enough food,” while The Independent laments that “75 per cent of the country’s population has lost an average of 19 pounds.”) This is because media coverage on hunger in Venezuela has relied primarily on anecdotal evidence and an inconclusive report authored in part by a member of the political coalition trying to remove Venezuelan President Nicolás Maduro from office.

The two pairs of statistics tell different stories about the situation in Venezuela. The first pair ― 93 percent of the population lacking food money, and an average weight loss of 19 pounds for 73 percent of Venezuelans ― depicts a country in dire, humanitarian crisis. The second pair ― 67.5 percent of the population eating three meals a day, and only 25 percent feeling deficient in their nutrition ― shows a country that is struggling, but also coping with its economic and political stress. Given that these figures appear only pages apart from each other in a short report, any reader should have determined that the survey’s results are at best inconclusive, and at worst contradictory. (Three-quarters of the population is losing 19 pounds on average, but only 25 percent think they’re not getting enough food?)

Unfortunately, the results of the survey have not been questioned; quite the opposite. The English-speaking press has reported the 90-plus percent/19 pounds statistics so many times that they’ve apparently become facts that don’t require citation. Yet according to a broad LexisNexis search, the 25 percent deficient figure has never been reported in English-language newspapers.

The FAO has provided evidence that food insecurity in Venezuela has increased over the past three years. This does not excuse US journalists and policymakers from crafting narratives with indeterminate sources like the Simón Bolívar University report. The policy implications of such careless reporting are substantial. A Treasury Department press release in July justifying sanctions against Venezuela stated, “tens of millions of Venezuelans are going hungry.” Not only is this figure at least two-and-a-half times the total estimate of 4 million given by the FAO, it is also directly in line with the 90 percent statistic from the inconclusive report.

The press should pay greater attention when vetting its sources, particularly in cases where circumstances limit the availability of data. It should also use internationally accredited sources, such as the FAO’s annual reports ― which provide figures showing that Honduras, Guatemala, and El Salvador ― close US allies in Central America, are suffering from similar rates of food insecurity as Venezuela. These hunger crises have received far less attention than the problems facing the Bolivarian Republic, despite the fact that these Central American food shortages are both well-documented and enduring. The media would do well to give them attention.

CARACAS, Venezuela — Venezuela’s Constituent Assembly, the political body created by President Nicolás Maduro as an end run around the legislature, on Wednesday made it harder for opposition politicians to run for president. In an unanimous vote — a turn of events increasingly common in the Constituent Assembly — lawmakers adopted a decree declaring that political parties that want to participate in coming elections must have been active in previous ones.

The could mean trouble for the three biggest opposition parties, which called on members to abstain in protest from recent municipal elections…

US newspapers and journals often attribute their Venezuelan hunger figures to “a recent survey … by the country’s leading universities.” The survey in question was published on February 27, 2016 by Simón Bolívar University, the Central University of Venezuela, and the Bengoa Foundation. The report, which focuses on Venezuelan nutrition, is part of an annual review covering the state of living conditions in the country. Maritza Landaeta-Jiménez, who as recently as 2013 was a member of the Venezuelan opposition’s Nutrition Commission, headed the 2016 research. The document, based on a survey of 6,413 Venezuelans, reported that 93 percent of Venezuelans felt that they did not have enough money to purchase food, and that 72.7 percent of Venezuelans had lost an average of 8.7 kilograms (19 pounds) in the past year. However, the same survey revealed that 67.5 percent of Venezuelans were eating three meals a day, and only 25 percent of the country felt that their nutrition could be categorized as “deficient.”

The Venezuelan dilemma: Progressives and the ‘plague on both your houses’ position by Steve Ellner, first published by TeleSUR, adapted and expanded for Venezuela Analysis, July 14, 2017