‘The Masks of the Revolution’: A new documentary film on the Odessa Massacre of May 2, 2014 in Ukraine 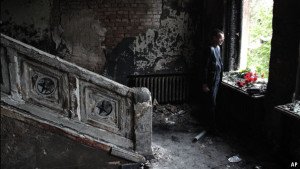 Trade Union House in Odessa attacked by arsonists on May 2, 2014 (AP)

French film director Paul Moreira has directed and produced a 54-minute documentary film on the Odessa Massacre of May 2, 2014 in the city of Odessa, Ukraine. The film, in French language, by was first broadcast on the Canal Plus (Canal +) television channel in France on February 1, 2016.

The translation of the title is ‘Ukraine: The Masks of the Revolution’. Below is the English-language promo of the film. It is not yet sub-titled in English. Further below that is a screen you can click to watch the film on You Tube, or click on the weblink here.

Paul Moreira has come under heavy criticism for the film. He has written a hard-hitting response to the film’s critics:

French filmmaker Paul Moreira responds to critics of his documentary film on the Odessa Massacre of May 2, 2014

By Paul Moreira, published in French on his blog on Mediapart.fr, Jan 30, 2016, translated to English by New Cold War.org.

‘Ukraine, masks of the revolution’ A film by Paul Moreira February 1, 2016 on Canal+

English-language promotion, on the website of Premières Lignes Télévision.

‘Without them, there would have been no Ukrainian revolution’

In February 2014, paramilitary groups fought against the police in the streets of Kyiv and ousted President Victor Yanukovych. They settled a new government. According to western media, they were the revolution’s heroes. They fought on the right side. But they are actually extreme-right militias. And they are now heavily armed.

The Right Sector, Azov Battalion and Svoboda Party created parallel irregular forces that easily went out of control. In Odessa, in May 2014, they were responsible for a mass killing without facing any charges. 45 people burned to death. A massacre that didn’t get much attention.

How come western democracies haven’t raised their voice in protest? Most likely because these Ukrainian nationalist militias actually played a significant role in a much larger-scale war. The Ukrainian revolution was strongly supported by U.S diplomacy.

In the new cold war that opposes Russia to the USA, Ukraine is a decisive pawn. A tactical pawn to contain Putin’s ambitions. ‘Ukraine, masks of the revolution’ by Paul Moreira sheds light on this blind corner.

Read about ‘Premières Lignes Télévision’, the production company of Paul Moreira and colleagues, here in English.