The Land Day Massacre of March 30, 2018 along the Gaza/Israel border 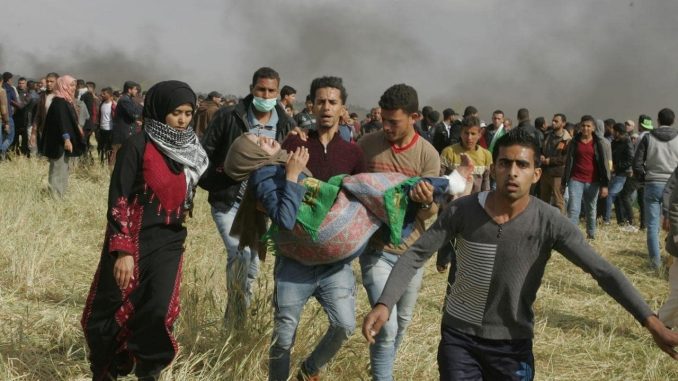 The Land Day Massacre of March 30, 2018 along the Gaza/Israel border: original article and and important compilation of news sources and journalist responses

First published in A Socialist in Canada, by Roger Annis, Apr 2, 2018.

Israeli military officials promise to expand its killing of Palestinians in Gaza if the planned six-week Great March of Return protest campaign continues.

Friday, during ‘Land Day’ commemorations of the beginning of the Nakba, or “catastrophe” as Palestinians refer to the establishment of Israel on their lands, the Israeli Defense Force, (IDF) met unarmed demonstrators with troops, tanks, drones, and the “100 snipers” promised earlier in the week.

The snipers, from perches behind earthen berms overlooking the estimated 30,000 strong demonstration, opened fire. IDF regulars sent hails of rubber-coated steel bullets and tear gas projectiles into the throng, as drones rained gas canisters on the men, women, and children from above. Tank fire too added to the chaos and destruction, and casualty count.

The Associated Press (AP) reported Saturday that 15 perished from gunfire outright[1]. Its hospital sources said more than 750 have been and are being treated for bullet wounds while twice that number have suffered injuries all told.

According to the AP, Palestinian hospital authorities at Gaza City’s Shifa Hospital said of the 284 injured received at its emergency ward Friday, the “majority” were bullet injuries. Hospital spokesperson, Ayman Sahbani said of those, 70 were under the age of 18, and 11 women.

Sahbani said, of the estimated 40 surgeries performed Friday, and 50 more planned for Saturday, all were for bullet wounds. “These are all from live bullets that broke limbs or caused deep, open wounds with damage to nerves and veins,” he said.

IDF spokesperson, Brigadier General Ronen Manelis contradicted casualty reports, charging the hospitals are “exaggerating” both the numbers and demographics of those injured.

Manelis also said allegations of excessive force are untrue, insisting those killed by the army were all “involved in violence” and exclusively of fighting age, “between 18 and 30 years old.”

The Brigadier General also warned that if protests do carry on, the army will “not be able to continue limiting our activity to the fence area and will act against these “terror organizations” in other places too.” Manelis here refers to Hamas.

Israel has never recognized the elected government of Gaza, calling Hamas a terror organization and regarding all its members and the civic and civil functions they operate as being by extension terrorist infrastructure, and therefore legitimate military targets. Saturday, and over the past week, the Israeli Air Force bombed various Hamas targets.

Meanwhile, politically divided Palestinians in the West Bank observed a commercial strike Saturday, called in solidarity for those killed and wounded.

In New York, United Nations Secretary-General Antonio Guterres called a joint emergency session Friday night, which resolved to initiate an independent investigation into events in Gaza, while urging “restraint by both sides”.

Guterres’ position is a reiteration of UN Special Coordinator for the Middle East Peace Process, Nickolay Mladenov, who in the aftermath of the massacre Friday urged “all sides to exercise restraint and to take the necessary steps to avoid a violent escalation.”

But like the continued enforced isolation and regular punitive police and military actions against Gazans, the ‘equivalency’ implied by Mladenov’s statement is now deemed an unacceptable misnomer, even within the mealy-mouthed lexicon of international diplomacy.

It would be laughable, and the Secretary-General would be regarded as a clown, if the situation in Gaza were not a literal, mirthless, killing joke. As Ramona Wasdi, writing in the Middle East Monitor cogently observes:

“The UN’s absence of any assertiveness when it comes to holding Israel accountable for its crimes is becoming a core component of the colonial entity’s ability to act with total impunity. Nowhere is this more evident than in its patronizing attitude towards the Palestinian right of return.”

Wasdi reminds that before the Great March of Return, Palestinians repeatedly assured that these would be dedicatedly non-violent manifestations, while Israeli officials and the media within promised that remorseless violence, death, and destruction would greet the protesters.

Indeed, IDF Chief of Staff Gadi Eizenkot minced no words in the weeks preceding the march, saying, “The orders are to use a lot of force.”

In that at least, Israel has been true to its word.

Chris Cook is the host of the weekly interview program ‘Gorilla Radio‘ broadcast every Thursday on CFUV Radio at the University of Victoria, British Columbia, Canada.

Related news and information, compiled for A Socialist In Canada (updated on April 2, 2018):

* Israeli military admits massacre of unarmed Gaza protesters was intentional – then deletes tweets, by Ben Norton, print report on The Real News Network, April 1, 2018  The IDF said its bloody crackdown on unarmed Palestinian protesters was “accurate and measured.” After shooting 773 Gazans with live ammunition, it wrote on Twitter, “we know where every bullet landed.”

*  Palestinian Authority slams U.S. ambassador to UN as ‘ambassador of hatred’ after she blocks anti-Israel move, Times of Israel, April 1, 2018

… The PA says Nikki Haley was responsible for aborting a UN Security Council resolution condemning Israel for Friday’s deaths and injuries of Palestinians during mass protests along the border between the Gaza Strip and Israel.

* Israel Kills Palestinians and Western liberals shrug. Their humanitarianism is a sham, by Mehdi Hasan, The Intercept, April 2, 2018

*  Land Day Massacre: With more Palestinians than Jews, Israel is waging a numerical war of attrition, by Jonathan Cook, published in ‘Opinion’ in The National (UAE), April 2, 2018

For the first time, there are more Palestinians than Jews living under Israeli rule

The Israeli army’s trigger-finger against Palestinian protesters close to the fence surrounding Gaza at the weekend [March 30], killing at least 18 and injuring hundreds more, has an explanation rooted in more than normal conceptions of security.

Even before Israel’s creation, its leaders were obsessed with demography and winning a zero-sum numerical war of attrition with the Palestinians. The consequences are still playing out to this day.

Last week, ahead of the Gaza protests, the Israeli army made an unexpected admission. It told parliamentarians that for the first time Jews are outnumbered by Palestinians living under Israeli rule, both inside Israel as citizens and in the territories under occupation…

Read the full article at the weblink above. Read Jonathan Cook’s website and blog here.

*  The biggest prison on Earth: A history of the occupied territories, by Michelle Weinroth, book review published in The Monitor (Canadian Center for Policy Alternatives), March-April 2018 edition (beginning on page 41), reviewing the book of the same name, by author Ilan Pappe.  See also by Ilan Pappe: Ten Myths About Israel, Verso, May 2017, reviewed here, beginning page 59.

Western media is quickly burying the story of the Land Day Massacre of March 30, 2018 on the Gaza/Israel border. Canada’s state-run broadcaster the CBC, for example, publishes a perfunctory news agency report on the ‘World News‘ section of the CBC News website. CBC did not report the Massacre in its national evening radio news broadcasts, not on ‘The World At Six’ on Friday, March 30 nor on ‘The World This Weekend’ on March 31.

The Toronto Star buried the story in its ‘World News’ section of its website. It publishes a news agency report highlighting Israel’s continued threats to strike against protesters. The report is titled, ‘ Israel says it will expand response if Gaza protests continue’.

On April 2, the Globe and Mail national daily published a New York Times story on the aftermath of the killings, giving over much space to the words of Israeli officials’ justifying their actions. The article headline refers to the murderous assault on unarmed Palestinians as “Gaza violence”. The following day, the newspaper published a lengthy critique of the Trump-led U.S. government for failing to criticize Israel’s Land Day massacre, but it said not a word of the similar stance by the Canadian government.

Al-Monitor uses the term “violent clashes” in its April 1 report of the Israeli assault. In a news analysis on April 2, Al-Monitor presents a shockingly sympathetic view of Israel’s Land Day Massacre. Its writer described favorably how Israeli snipers sought to avoid shooting women and children. He likens the killings to “mistakes” and writes, “The [domestic political] cost is the essential issue that makes Israel’s achievement on Friday [March 30] problematic.”

Disappointingly, the RT news service reporting is highlighting the comments by Israeli military and political officials justifying their assault.

[A large coterie of journalists in Canada,  from mainstream to ‘alternative’, have condemned Canadian Journalists for Free Expression for an April 2 statement condemning Israel’s murderous assault on March 30 (Land Day Massacre) against Palestinians, including Palestinian journalists. The CJFE has caved in and withdrawn its statement and fired the media director who assembled and published it. See Kevin Metcalf’s April 8 statement as well as the original CJFE statement on April 2  here. These same journalists have been silent or supportive over Canada’s military intervention into Ukraine and its support to the regime change war against Syria.]
Editors’ Note: While we don’t necessarily share the views we publish on New Cold War, we do attempt to provide readers with a range of views. This is because your right to make your own mind up depends on your being fully informed.
Share
Tweet
Share
Pin