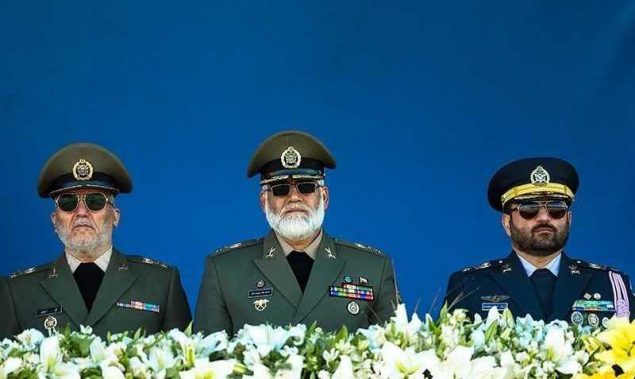 “Trump’s policy of not just exiting JCPOA, but of going that ‘mile’ further in seeking to overthrow Iran as well, through sanctions will eventually become seen as ‘the Albatross’ which Trump injudiciously – and without compelling need – hung about his own neck.”

“Mr. Trump, nor anyone else in his administration, has announced any conclusions about how Mr. Khashoggi died, or who bears responsibility for ordering the killing”, a Washington Post editorial fulminates. “Instead, they have pretended to be waiting for the results of a Saudi investigation… the obvious problem with that stance is it assumes that Mohammed bin Salman himself is not at the bottom of the Khashoggi plot — though abundant evidence points to the crown prince. In truth, as the administration surely knows, there is no Saudi investigation — only a cover-up operation that has clumsily tried to disguise itself as an inquiry”.

One aspect to this affair is the US domestic issue. The White House is increasingly perceived – as the Washington Post implies – as engaged in a ‘soft’ cover-up of a cover-up. That is to say, the White House is being viewed as so set on keeping MbS in position as lynchpin to Trump’s entire Middle Eastern strategy that the White House and Mr Bolton will try to turn a Nelsonian ‘blind eye’ – or a ‘selective ear’ – to any audio evidence provided by the Turkish government that seems to implicate MbS.

President Trump is keeping his powder dry. He said: “I’ll have a much stronger opinion on that subject over the next week … I’m forming a very strong opinion.” But caution on his part might be wise: leading Turkish daily, Yeni Safak, which is close to the Turkish government, and which has been covering leaked details of the Khashoggi investigation day by day, has reported that Maher Mutrib, the Saudi intelligence official who led the 15-man assassination team in Ankara, spoke to Badr al-Asaker, the head of the Crown Prince’s private office, four times directly after Khashoggi was killed (if it was Mutrib who said “tell your boss” to MbS’ chef de cabinet, then the implication is clear). This has not been officially confirmed, but it is possible (and likely) that Turkish intelligence has yet further details to trickle out, piecemeal, to discredit the Saudi ‘line’ each time the kingdom tries to ‘draw the line’ under the case. Erdogan is determined to get MbS’ scalp, it seems.

In any case, the nature and cost-benefit of the Saudi-US relationship clearly is an issue set to run-on in Washington: Adam Schiff (Chair of the House Intelligence Committee) has already identified it – and ‘the who, where, and what’ of the Khashoggi affair – as a prime topic for Democratic Party scrutiny, when the new House assembles.

However, the bigger issue – one that Trump may not yet be ready to admit – is that his Mid-East strategy is in deep trouble, even if MbS does manage to survive as heir-apparent, as seems likely, given Trump’s strong attachment. The complication does not derive from the gruesome Khashoggi murder alone – it is now much wider than that. The significance of the Khashoggi affair, as it were, is that it has slid open a Pandora’s box of ugly goings-on. What is emerging from the Gulf is that the Khashoggi assassination is neither isolated, nor out of the ordinary in the Gulf today: Buzzfeed News reported that UAE leaders had set up, and tasked, a foreign military mercenary unit for the explicit task of serial assassinations of Muslim Brotherhood leaders (Al-Islah), in Yemen (whilst Saudi Arabia was at the same time, quietly facilitating al-Qa’eda forces in Yemen, fighting against Houthi insurgents). More recently, the NY Times has disclosed an attempt by a senior Saudi official to close a $2 billion contract with US interests – again for serial assassinations – but this time, of Iranian leaders. It is, to put it bluntly, more redolent of the Saddam Hussein era, to read these reports; and those of Princes ‘disappeared’ from Switzerland and Paris; of a Prime Minister hijacked; and of dissenters and senior princes incarcerated at whim.

Of course, the ‘realists’ will argue ‘so what’. And we see this line coming from ‘western officials’ in their briefing, for example, to the Financial Times: a weary sigh of ‘there is no alternative’ percolates through. “Western officials doubt that the 33-year-old prince is in danger of being ousted as he has consolidated so much power, including bringing all armed forces and security services under his control … There is no obvious candidate to replace Prince Mohammed, who has won support among youth and the liberal elite for his social reforms during his meteoric rise”, they conclude. Really? No one? No one else to perform any of this roles?

Well then, there is indeed a problem here for Trump’s grand strategy: In fact, there is a three-fold problem: One, is psychology. Does MbS or Saudi Arabia now embody anything authoritative, anything compelling, in terms of leadership or vision? Does the Kingdom have the charisma now to gather under its ‘banner’ the Sunni world, and to lead Trump’s ‘war’ on Iran? (Most people in the region have been sickened by events in Yemen, even before the Khashoggi murder).

Secondly, have not all these reports underscored Mr Trump’s political risk in staking so much on the veritable pinhead of a one-man platform? What else lurks unknown and unseen, beneath the surface? (By-the-by, Prime Minister Netanyahu has based his platform too, on a similarly, precariously narrow foundation.)

And lastly, what – in the light of all that is emerging – now stands as the core ‘idea’ advanced by the Gulf: What does ‘the Gulf’ stand for after the eclipse of Monarchial, de haut en bas, handouts of benevolence to grateful ‘subjects’? Is it a vision of quasi-secular autocracy, the ubiquitous security-state, and raw neo-liberalism? Admittedly, the might prove a hit with Israel, but in terms of the energetic national, cultural re-sovereigntisation taking place in the northern tier of the region, this leaden notion is no competitor. And the embrace of the security-state structure – in, and of itself – speaks not of self-confidence, but of rising internal dissent and existential pressures that must be contained and suppressed.

And it is this latter point (increased internal repression) on which Khashoggi’s death, inadvertently, has shed unexpected illumination. It is an insight which suggests that the future axis of conflict in the region will not be as Trump and PM Netanyahu had hoped. It will be focused not on Iran, but will rotate towards a further round of conflict with the Muslim Brotherhood and its patrons – Turkey and Qatar. Some Gulf states are more frightened of Islamist Muslim Brotherhood dissidence within their emirates than they are frightened of Iran, which has no history of external state expansion. These anxieties are driving – and represent – the new regional re-alignment.

And these Gulf states, the UAE and Saudi, are fearful that Turkey – the old Ottoman imperial political power, and seat of the Islamic Umma – might just succeed in usurping Saudi Arabia’s Islamic credentials – as diminishing Saudi’s position as being no more than an inept Custodian of Mecca and Medina (the Turkish press is full of such claims). This would strip the Gulf of much of its significance and value to Washington.

And whilst the Gulf has made its turn toward a quasi-secularism to please the West, Turkey has been quietly vacuuming up what there is of the Gulf’s discarded Islamic credibility in the form of a MB-style, ‘soft’ Islamism – and a very explicit neo-Ottoman revanchism, fueled by Turkey’s sense of being victim to a conspiracy led by Mohamed bin Zayed, the US and Israel.

Thus, the axis of the coming conflict is more likely to be that between a fearful Gulf, and an increasingly assertive Turkey, bidding for the leadership of the Islamic sphere. As for Iran, it can contemplate these events with sanguinity: Saudi being pressed to end its campaign against Yemen -and end its siege of Qatar. And, additionally, this new regional dynamic will only serve to push Turkey and Qatar closer to Iran.

None of this can be countered as promising for Mr Trump. Turkey will ‘lead’ on embracing the Palestinian cause (with Iran and Qatar in the rear), and MbS will lack the credibility or standing to lead any new ‘war’ against Iran after the disaster of Yemen, nor be able to coerce the Palestinians into capitulation in the face of the ‘deal of the century’. Even his near incapacitated father, as well as the al-Saud family, understand Netanyahu’s strategy to bury the ‘idea’ of a Palestinian state – and in any event, Bibi’s strategy is likely to be overtaken by internal politics, as Israel struggles with the implications of Lieberman’s resignation.

All this raises the question of why the Trump Administration continues to view an MbS-led Kingdom as somehow still a fount of strategic stability (… is it just that old habits die hard)? Trump’s policy of not just exiting JCPOA, but of going that ‘mile’ further in seeking to overthrow the Islamic Republic as well, through sanctions will – we suggest – eventually become seen as ‘the Albatross’ which Trump injudiciously – and without compelling need – hung about his own neck. It will not work, and America’s credibility in the Middle East will be gone when that failure becomes apparent.