The inconvenient truth about the US-bound migrant caravan 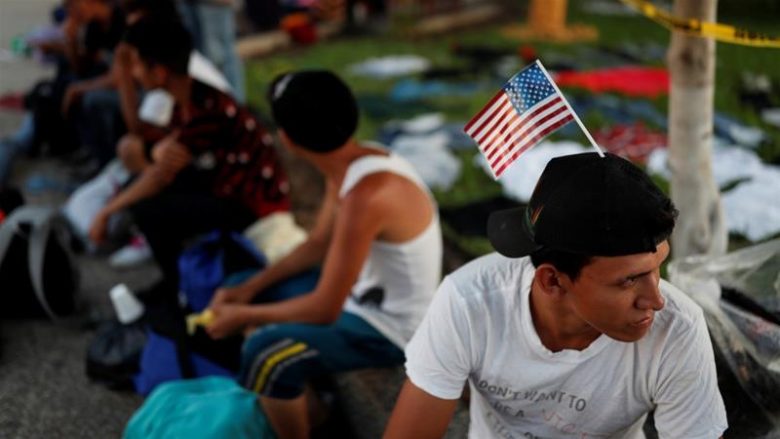 This article contends that it is hard to argue that the current migrant caravan is a result of anything other than the sustained physical and economic assault by the very country that is now preparing to repel it.

The migrant caravan Trump is so obsessed about is a direct result of US foreign policy.

In mid-October, what has come to be known as the “migrant caravan” departed Honduras for a weeks-long trek through Guatemala and Mexico to the United States.

The size of the caravan has fluctuated, but the United Nations calculated that, as of 22 October, some 7,200 people had joined up – many of them fleeing abysmal contexts of poverty and violence.

While the journey is an arduous one, the decision to travel as a large group mitigates the dangers generally faced by northward-bound migrants, including murder, disappearance, rape, and theft.

Of course, other obstacles still abound – among them US President Donald Trump, who quickly took to Twitter to announce that “criminals and unknown Middle Easterners are mixed in” with the caravan and that “I have alerted Border Patrol and Military that this is a National Emergy [sic]”.

After all, what better way to attack the US than by walking there from Honduras?

Though Trump subsequently admitted that there was actually “no proof” of the presence of “unknown Middle Easterners”, the “National Emergy” continues to rage – conveniently in the runup to midterm elections, for which Americans need to be repeatedly reminded of the ongoing existential battle against invading hordes of “Others”.

On October 25, the Washington Post reported that “800 to 1,000 more [US] troops, most of them active-duty forces from the Army”, will be deployed to the US-Mexico border in response to the caravan.

Additional spontaneous policy adjustments have also been proposed by Trump, who complained on Twitter that the governments of Guatemala, Honduras and El Salvador “were not able to do the job of stopping people from leaving their country and coming illegally to the US.”

Thus, the president continued, “We will now begin cutting off, or substantially reducing, the massive foreign aid routinely given to them”.

Incidentally, were such a move to exist within the realm of possible reality rather than simply the realm of “Things Trump Says”, it would no doubt be wholeheartedly supported by, inter alia, victims of lethal repression by US-funded Honduran state security forces.

Which brings us to the following short history lesson: US foreign policy in Central America over the past several decades – comprising “massive aid” to dictators, death squads, and other violent entities – is itself largely to thank for US-bound migration in the first place.

Previously, the Cold War provided the justification for all manner of US-backed regional savagery under the guise of defending the so-called “free world”. Honduras, for example, was utilised as a launchpad for the US Contra assault on neighbouring Nicaragua in the 1980s, a bloody affair described by Noam Chomsky as a “large-scale terrorist war” that was accompanied by “economic warfare that was even more lethal”.

Nor was Honduras exempt from its own forms of terrorisation, thanks to a CIA-trained death squad that went after suspected leftists and other domestic enemies of freedom.

In civil war-stricken El Salvador, US support for a right-wing regime facilitated tens of thousands of political murders and fueled Salvadoran migration to the US, where street gangs formed to protect the immigrant community. The gang problem was then exported to El Salvador via a US deportation frenzy in the 1990s.

In Guatemala, the 1954 CIA-orchestrated coup against the elected government of Jacobo Arbenz – who was insufficiently obsequious to US corporate interests – helped pave the way for ensuing decades of war, during which over 200,000 Guatemalans were killed or disappeared.

The US-based Centre for Justice & Accountability notes: “Of those victims identified in the UN-sponsored Historical Clarification Commission, 83 percent were indigenous Maya. 93 percent of these human rights violations were carried out by government forces.”

One can guess which global superpower might have been backing those government forces.

And while the Cold War may have ended, the fight to maintain the neoliberal domination of the hemisphere continues – with a predictably heavy price paid by the region’s poor.

In 2009, the US laboured to ensure the success of the coup against Honduran President Manuel Zelaya, who had dared to raise slightly the national minimum wage and to suggest that communities affected by toxic corporate mining operations should perhaps be consulted as to what they thought about the matter.

The aftermath of the coup fostered a general climate of impunity, enabling a surge in homicides and other violence and earning the country the dubious distinction of “murder capital of the world” – but at least Honduras was still “Open for Business“, as per the slogan of the post-coup administration.

In short, it’s rather difficult to argue that the current migrant caravan is a result of anything other than sustained physical and economic assault by the very country that is now preparing to repel the caravan.

This same country, it bears reiterating, has unilaterally endowed itself with the right to aggressively transcend international borders at will, while criminalising human movement in the opposite direction – a task significantly aided by the invocation of “unknown Middle Easterners” and other bogeymen.

For his part, Honduran President Juan Orlando Hernandez has – in yet another exhibition of the impressive limitations of the right-wing imagination – helped to discredit the migrants’ cause by informing US Vice President Mike Pence that the caravan is a leftist plot financed by Venezuela.

In a recent article for The Atlantic titled “The Caravan Is a Challenge to the Integrity of US Borders”, meanwhile, David Frum – a former speechwriter for George W Bush – encourages us to “understand what’s at stake: The theory behind the caravan … is that Central Americans have valid asylum claims in the United States because of the pervasive underemployment and gang-violence problems in their countries”.

Sounds like a valid theory, particularly given US complicity in those “problems”. Frum, however, thinks otherwise: “If that claim is true, that is a claim shared not only among the thousands in the current caravan, but the millions back home”.

In other words: it could be the end of the world as we know it.

All the more reason, then, to keep the caravans coming.

The views expressed in this article are the author’s own and do not necessarily reflect Al Jazeera’s editorial stance.